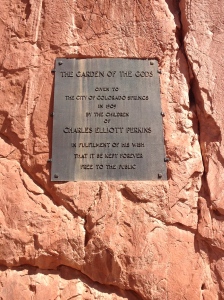 I was not expecting to make any posts this week, as I have kind of been focusing on some other projects that do not involve traveling.  But, for reasons I do not need to get into, I felt the need to take a drive today.  There are several places I have wanted to see ever since moving to Colorado (that I have not seen before), and this place, the Garden of the Gods, is the one that was certainly not going involve me encountering snow (unlike the source of the Colorado River and Mount Evans).  I guess I really would prefer not to encounter snow at this point in time.  There will be a great time for me to encounter a ton of snow, in November, and during ski season.  At that point- bring it on.

The Garden of the Gods is neither a National, nor a State park.  It is technically a city park, in the city of Colorado Springs.  Colorado Springs is about an hour south of Denver, and is the second largest city in the State of Colorado.  The most common reason people visit Colorado Springs is to go to Pike’s Peak.  Pike’s Peak is dubbed “America’s Mountain”, and attracts tens of thousands of visitors a year.  However, ever since moving to Colorado, I’ve kind of wondered why.  Pike’s Peak is only like the 31st or 32nd (or something like that) highest peak in the state, and it is not even the tallest mountain that one can drive to the top of.  Mount Evans is taller, and seemingly just as close to Denver International Airport.

However, as I approach Castle Rock, it somewhat dawns on me what makes Pike’s Peak unique.  And, well, it is actually something I should have figured out a long time ago, as I do frequently stare at maps. 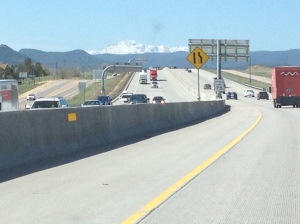 You see, when it comes to proximity to other tall mountains, Pike’s Peak is actually quite isolated.  Most other mountains in Colorado, including Mount Evans and Mount Elbert, the state’s tallest peak, are a part of a mountain range and are pretty close to other peaks.  People in Colorado talk about climbing to the top of two or three 14ers in succession quite frequently.  Most peaks are at least near others exceeding 12,000 feet, but not Pike’s Peak.  Pike’s Peak’s isolation makes it easy to spot as far away as Castle Rock (40 miles away).  This had to have contributed to it’s popularity. 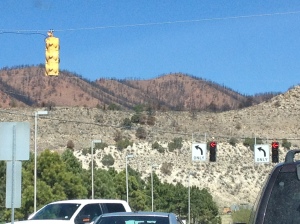 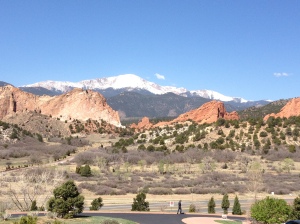 Upon entering Colorado Springs, it is actually quite easy to notice the remnants of last year’s wildfires.  In the foothills outside of town, all the trees are still charred up.  It is also easy to spot Pike’s Peak, especially from the Garden of the Gods.  Pike’s Peak towers over the town much the same way the Empire State Building towers over New York city.

However, there is a major difference between the two.  The structures that tower over cities in Colorado, the mountains, are all natural features.  Whereas, in both New York and Chicago, the structures that tower over the town are man-made buildings.  I seriously start to ponder what kind of sociological effect this has on each city’s inhabitants.  Can this difference actually explain some of the attitude differences we observe between people from Colorado and New York?  Is there some kind of subtle subconscious message being sent into everyone’s mind every time they see the most obvious feature in their area and they know whether or not mankind was responsible?  I mean, Coloradans see nature predominating over man when they look at their skylines, but New Yorkers and Chicagoans see the opposite in theirs.  Maybe my thoughts are just running away with me, but, heck, that is why I came, to collect some thoughts. 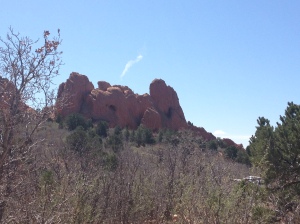 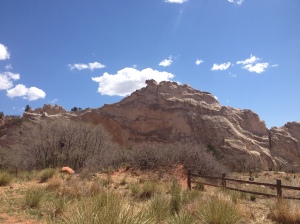 It turns out that the Garden of the Gods is not a major place for outdoor activity, at least not for Colorado standards.  There is some hiking, mountain biking, and climbing, but they are all quite basic.  Mostly in the park, there are sidewalks that people walk on and observe the structures in the Garden.  These structures are fairly unique rock formations and they vary in color as they vary in age.

In one of the few places where I am able to do some off sidewalk hiking, I hike up some rock and get a unique view of the garden, as well as of Pike’s Peak.  I found this small little area carved out of the edge of one of the rocks.  Being in the shade I found it a great place to gather thoughts.  I started to gather thoughts of Pike’s Peak being some kind of watchman, watching over the city, and the garden’s rock structures being it’s associates.  However, before I could get to a productive thought, my thought gathering was interrupted by a teenage girl who saw where I was sitting and was intrigued.  She climbed over to me and started talking to me about what she was doing, and how she loved to climb the rocks and all.  When she asked me if this one guy standing about 150 feet away from me was my brother, it suddenly occurred to me that she was most likely under the impression that I was a lot closer to her age than I really am.  The guy she asked about was a teenager on a trip with his parents (as was she).

On the way back I began to wonder if I look young, act immaturely, or if there is anything about me that would make someone believe I could be barely 21.  But, then I realized that this most likely had more to do with where I was than anything else- Colorado Springs.  In Colorado Springs it is far more common to have already married and had kids by the age of 30 (or even 25).  This is quite different than the places I have inhabited over almost my entire life.  In Denver, as in Chicago, it is quite common to see people in their 30s that are still single, and not single for obvious reasons (essentially a repulsive personality).  I have read this is not the case everywhere, and it is possible that in Colorado Springs this is the case, and that as much as I would like to be flattered by this exchange, she probably just assumed I had to be under 25 because I was there without kids.

On the way home, I decide to get Culvers, as I had seen a Culvers sign on the way there and realized I had not been there in about a year.  Getting there, though, was a challenge.  I have not spent too much time in Colorado Springs, and do not know the road system too well.  Unfortunately, the road system is not to intuitive. 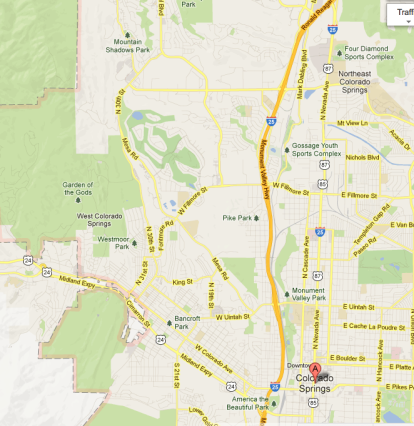 What is all this about!  Every road I was on was constantly curving one way or another.  There is only one possible explanation about how this road network came to be.  One hundred years ago or so, some city official was charged with developing a road system.  He did not know what to do, so he had his five year old daughter throw spaghetti noodles at their wall.  He then used the layout of these noodles to make a road system for the city.  Really, I can’t think of any other reason for this.

1 thought on “The Garden of the Gods: A Place to Collect Thoughts”