It has been unprecedentedly cold across Colorado these past several days!  It’s been so cold that no outdoor activity, not even skiing, sounds even remotely appealing.  So, in order to make the most of my time, I decided that today would be a good day to check out the new exhibit at the History Colorado Center.  As, I do want to check it out, and will likely be skiing or traveling elsewhere the next several weekends. 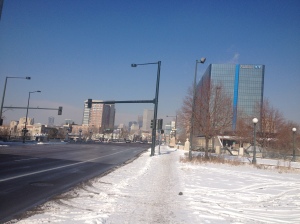 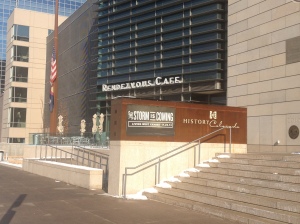 The History Colorado Center is a State history museum in Central Denver, located just south of downtown.  As the name advertizes, the museum covers the history of the State of Colorado.  A similar museum can most likely be found in nearly all state capitol cities.

In my biased opinion, the History Colorado Center is one of the best museums I have ever been to.  The reason I say it is a biased opinion is that I definitely prefer museums that cover topics I am personally interested in.  I tend to be more interested in science and history than art and lifestyle museums.  In addition, I have not been to too terribly many museums, as I tend to spend more time on outdoor activities.  So, my recommendation of this museum can be taken for what it’s worth; based on a strong personal bias and a limited sample set of options.  But, I do feel like this museum is worth the $12 admission. Today we spent just shy of three hours there, but I do feel like I could spend close to an entire day here.

I really enjoy this museum for three reasons:

1.  The museum is highly interactive.

This seems to be a trend in museums of late.  I am not sure what instigated this particular trend, but over the past decade more museums have been moving towards more interactive exhibits.  This particular museum was constructed only a couple of years ago (replacing the previous Colorado History Museum), and thus many of the exhibits at the museum are indicative of this trend.

Just inside the entryway to the museum is a “time machine” exhibit.  These two “time machines” can be physically moved across a gigantic map of the State of Colorado.  Depending on where these devices are placed, a user can select a year from a list.  Each selection contains a different historical story of Colorado.  These stories come from many different time periods and nearly all portions of the state.  If one were to watch all of the stories available in this exhibit, it would definitely take multiple hours.

Other interactive exhibits at this museum include a silver mining exhibit, a bunch of screen-selecting games, and my personal favorite, the ski jump simulator.  The ski jump simulator not only simulates the building of speed, becoming airborne, and subsequent landing, but also requires that the user mimics the right ski jumping technique.  All this is done in from of a screen that shows the ski jump in progress.  Improper technique will result in a crash in the simulation, and the length of the jump is also dependent on technique.  It is interesting to attempt this ski jump simulation several times to get the best possible result.

2.  The museum presents a fairly complete representation of state history.

By this I mean the all regions of the state, all time periods, and all types of people appear to be represented at this museum.  Many people think of Colorado and think only of the mountains and the activities associated with the mountains.  Some think of Denver and the Front Range cities, but the entire Eastern 1/3 of the state is often ignored.  This museum actually includes several exhibits that cover life in the Great Plains portion of the state. 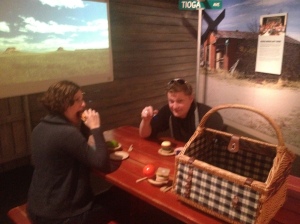 Half of the first floor of the museum is dedicated to the story of a small town named Keota on the plains in Northeastern Colorado.  Like many town in this area, it’s economy was primarily based on farming and ranching.  Although the town did fairly well in the first couple of decades of the 20th century, it did not fare well during the dust bowl and now is basically a ghost town.

Other exhibits about the history of Colorado’s often forgotten Eastern portion include one on Bent’s Old Fort, and one on the Sand Creek Massacre.  With these exhibits, and several others, the History Center Colorado also presents history from the point of view of nearly every ethnic group to ever inhabit the state.  One exhibit describes Colorado’s history as a borderland between the United States and Mexico prior to the Mexican-American war.  Another one describes the Japanese Internment Camps during World War 2.  And, despite the fact that Colorado is only 4% black (as a state), the museum contains an exhibit about a place called Lincoln Hills, a resort in the mountains developed by black people for black people at a time when many places refused to serve them.

In addition to presenting history from all portions of the state, as well as from multiple perspectives, the museum covers times all time periods, as well as both good times and bad times.  The Steamboat Springs Winter Carnival is a celebration of the winter sport activities that make Colorado a destination for many.  However, the new exhibit covers the importance of water resources in the state of Colorado.  This exhibit covers three periods of time where water resources and the management of them made a major difference in life in Colorado.  In the 13th century water resources were depleted from the “Mesa Verde” area, leading to hard times for the once thriving Pueblo Indians in that region.  Their response was to move south to areas where resources appeared more abundant.  Remnants of this civilization can still be viewed at Mesa Verde National Park, the only archeological U.S. National Park.  The dust bowl was one of the hardest times in Colorado.  Many farmers suffered from a combination of low prices and extreme drought.  This began a population decline in the plains, but some remained on the land.  Finally, current concerns about water resources were covered, as reduced snowpack from climate change combined with population increases threaten shortages of water resources.

3.  The museum has character. 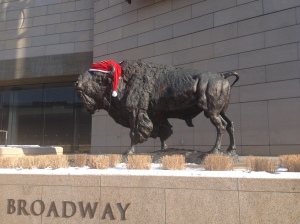 By this I mean there are a lot of little fun things like this Bison topped with a Santa hat.  Throughout the museum there are a lot of other little decorations here and there, such as the Welcome to Colorado sign, that just make the atmosphere a bitmore fun.  They do this without either going over the top, or seeming too cheesy, which I very much appreciate.

Visiting the History Colorado Center today was a good change of pace from my normal activities, and a wonderful way to take advantage of a day with less than ideal weather.  With a fun yet intelligent atmosphere, a complete view of Colorado’s history as a state, and a plethora of interactive exhibits, my visit to the History Colorado Center  was a memorable experience.  It gave me a lot to think about, and a good overview of the state that I now call home.