One week prior to departing for the GoPro Mountain Games, I had no idea that the GoPro Mountain Games even existed!  I would never have thought that GoPro, the company that makes those portable cameras, would decide to sponsor an event like this.  It’s not that it’s one of those things that makes no sense, like McDonalds sponsoring bike rides in Chicago.  In fact, when I looked into the event upon being invited, it made perfect sense to me.  It is those GoPro cameras that people use to film their outdoor adventures, from skiing to mountain biking, climbing, and even those crazy people that swing from arches in Utah.  Thinking about that, it makes perfect sense for GoPro to put together an outdoor celebration like this in Vail, Colorado.  It is just something I would not have thought of had I not been informed of the event.

In some ways, Vail is a very different place in the summer.  Accustomed to seeing the ski resort in winter, covered with snow to ski on, it looks quite different by June.  Also, with skiing being the main reason people make the trip up to Vail, some things are cheaper.  Not only was the hotel I stayed at in Vail Village a place I wouldn’t consider unaffordable during the ski season, but breakfasts like the one pictured above, normally $20 per person, are free from April to November. 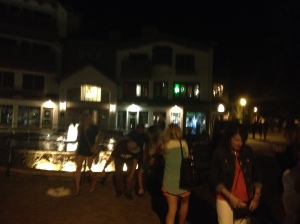 However, in some ways, Vail is the same place, regardless of season.  The nightlife definitely felt the same as it had in the winter.  The Gondola was still running (what for, I do not know).  And, no matter what time of year you visit Vail, you generally encounter the same mix of people; wealthy but generally casual and in good shape.  It is a crowd I can never figure out whether or not I truly fit in with.  I love skiing and the outdoors, but I am not rich, and I still have many attitudes about life that are way more East Coast than West Coast.

The GoPro Mountain Games consist of many different kinds of events, including biking, climbing, kayaking, running, and even dog jumping.  I think there is even a Yoga event in there.  The easiest way for me to think of it is to imagine the (above mentioned) demographic group that attends this event, and then think of everything this group of people do.

The event with the biggest draw is called “bouldering”.  It is basically the kind of climbing that you do inside at the gym, as opposed to the climbing you do outside with ropes and such.  Watching this event was interesting primarily because everybody in the crowd cheered for everybody.  Unlike in the Olympics, where we primarily only cheer for those from our own country, and team sports where we genuinely cheer for one team to beat another, in this event, everybody appears to genuinely want everybody to succeed.

The craziest event was definitely an event called “8 Ball”.  In this event, kayakers race down the river.  However, along the route, there are a bunch of guys in kayaks with 8-Ball wet suits on that basically play defense.  They attempt to impede the racers along their route towards the finish line.  I really wonder who came up with this one!

My favorite event was an event called dock dogs.  In this event, dogs, mainly retrievers and shepherds, jump off a dock into a large pool of water.  The dog whose jump is the longest is crowned the winner of this event.

I loved this event for two reasons.  First of all, I love dogs.  I own one, and in many of the hiking entries in this blog, you will see photos of my Siberian Husky.  Second, I just love how goofy it really is.  The dogs are prompted to jump off the dock when their owners throw this long cylindrical toy for them to chase.  It looked exactly like what one would encounter while hanging out at a lake home in Wisconsin.  In fact, the world record holder in this event is from Minnesota!

For a weekend trip to a major event a couple of hours away, this trip was a spontaneous one.  I was basically invited to come along on this trip on the Monday four days prior to departure.  To add to that, I only really knew one person of the eight others involved, the guy who invited me.  It is the kind of invitation that most people would have dozens of reasons to say no to, from previous plans to personal budgeting and even the much more onerous social anxiety.  But, those that remain open to, and say yes to invitations like these are often rewarded with some unexpected significant experiences.

I have come to the realization that one of the most effective ways to meet people and make friends is through mutual friends.  Some of the best friends I have here in Denver I have made through having one or more mutual friends.  The same is true of pretty much every other place I have ever lived.  For some strange reason it is easier to form a bond with someone who knows some of the same people.  Someone who chooses to hang out with the same kind of people is likely to be someone you have a lot in common with.  In fact, in my experience of forming friendships this way, there has even been little to no reliance on mutual acquaintances for conversation topics.  It just naturally starts itself.  Or maybe that is just the way I am.  Either way, it was great to have decided to head to this event, and it serves as a reminder of how much our lives are enriched by spontaneity!