For me, at least, this is a whole different kind of camping than what I am used to.  I am not a very experienced camper.  In the entire course of my life I think I have camped maybe a couple of dozen nights.  All of these nights took place at a campground, typically reserving a site ahead of time.  Last night, I took part in a style of camping that is fairly common in the State of Colorado, but seemed quite strange to me when I first heard of it.

There are no specified campsites or reservations.  There is no park office to check you in, collect a fee, and sell you firewood.  There are no restrooms or showers, and there are certainly no vending machines.  This type of camping simply involves finding a spot in the forest to lay down tents.  It is so basic, and so obvious.  Just go and camp.  Yet, in the context of the modern world that we live in, it sounds so strange.

In fact, I did not even know how to prepare for this trip.  When we all went to the store to get supplies, I was the only idiot grabbing burgers, buns and cheese, as if I was preparing for a barbecue, until I was instructed otherwise by those who have actually camped in such places before.  There are no grills here.  You can only prepare food supported by the equipment that you bring.

We camped high up in the Rocky Mountains, around 60 miles west of Denver, just south of a place called Guanella Pass.  This wilderness region is particularly significant, as trailheads leading to the top of two major mountains, Mount Bierstadt and Mount Evans, can be found throughout the area.  So, although there is no specific campsite, it is still a common place to camp, as many heading up one or both of these mountains set up camp in the area.

We set up camp in the area along Geneva Creek, where a significant number of campfire setups like this one are left behind by previous campers.  So, while I can count this among the most remote places I have spent an evening, I realized that there are places that are even more rustic, more primitive, and farther “away from it all” than here.

We did not intend to climb a major mountain, nor did we have the time to do so.  This trip was actually planned last minute by people more knowledgeable than me about such things.  We ended up hiking a more moderate, and shorter trail called the Burning Bear Trail, which follows a creek by the same name.

The trail starts off pretty flat, and looking more like a dirt trail than a typical hiking trail. 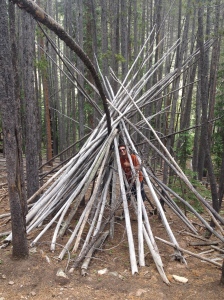 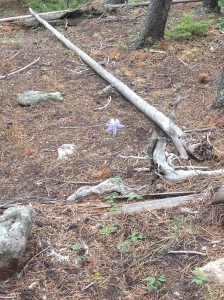 As the trail picked up, I saw a significant amount of chopped down tree branches, many of which were chopped down in some sort of regular pattern.  In one section, the tree branches appeared to have been arranged to form some sort of tepee.  I took a gander inside, but it did not feel too useful.  Also pictured above is the columbine, which is Colorado’s State Flower. 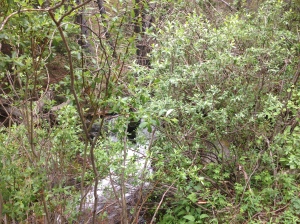 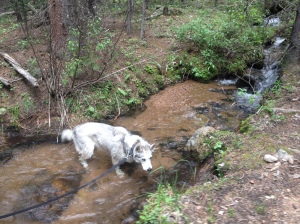 While there were no major waterfalls, there were a lot of small waterfalls along the trail, and plenty of places where my dog could cool off in the creek. 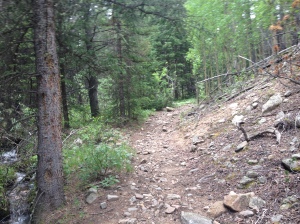 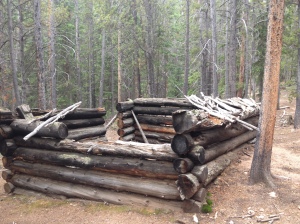 After hiking roughly 2.5 miles, and climbing probably about 900 feet, we reached some kind of old cabin, which made for a good stopping point, where we could turn around and get back to the campground with plenty of time to prepare fire and dinner and such. 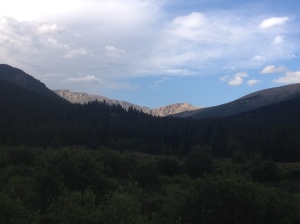 Returning to the trailhead around 6:15 P.M., we encountered what I thought was the most amazing view of the entire wilderness area of the day.  By that hour, the sun had reached a lower angle, accentuating the mountain’s higher peaks. 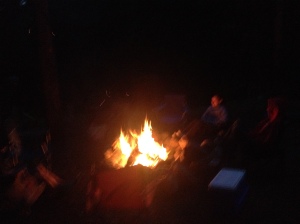 In some ways camping that evening was similar to a typical camping experience.  We cooked some food, set up a campfire, told some ridiculous stories, and went to bed around 11.  There was marshmallow roasting, and people throwing all kinds of random items into the fire to see how they would interact with the heat and flames.  Mosquitoes came out in gradually greater and greater numbers as the evening progressed, and went away around sundown.

However, in some other ways it was different.  As previously mentioned, we were not grilling.  Instead, we were cooking food on small stoves.  Although we did use some previously purchased bundles of firewood, we also used a significant amount of firewood that we gathered from random tree branches.  In fact, we even tried to lite branches that were retrieved from the creek.  They turned out to be a bit too wet. 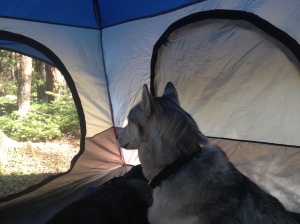 There were a couple of other firsts for me on this journey.  Aside from being my first time camping at a place other than a designated campsite, it was my first time camping with a dog.  This presented some other challenges, but, my dog definitely seemed to enjoy it.  Also, at an elevation close to 10,000 feet, it was by far the highest elevation I had ever camped at.

In the end, one of my favorite parts of the evening was when I arrived back at the campsite at roughly 6:30, went back to the tent, and threw all of my stuff down, including my wallet, phone, and keys.  I had previously not thought about this, but these three things represent the basic necessities of our connected 21st century world.  Most days when I wake up, I reflexively pack those three things into my pants pockets.  Even when I am going for a bike ride, I have them in my camelback.  In a way, setting these three items aside is symbolic of having truly escaped to somewhere different.  It is truly having left everything behind and actually haven taken a break from whatever your day-to-day life typically entails, including it’s stress, anxiety, and uncertainty.  Once those three items are put away, the here and now is all that needs to be considered, and there is something inherently amazing about that, which I had previously failed to appreciate.