I laid there for over an hour in the hot California sun.  In fact, it was unusually hot for the oceanfront.  While areas further inland regularly get significantly hotter, temperatures well into the 80s with insane humidity is quite rare for the beech.  Despite the unusual conditions, I still captured this California experience.  In fact, the entire time I felt as if I had stepped right into a Red Hot Chili Peppers song. 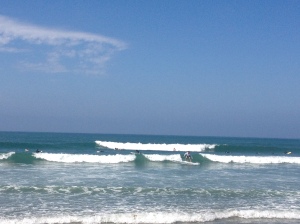 There is the ocean, the palm trees, the waves, and most importantly, the surfers.  Boy were there a lot of surfers.  I had never seen so many surf boards in my life.  Even in my most vivid imagination of a California stereotype, there were not nearly as many surf boards in one place.  On the way to and from the beach, a clear majority of vehicles had surf boards in them.

And I watched, gradually getting a nasty sunburn on my back.  I watched people walk by.  I saw a group of people play football in the water.  I saw about a dozen “wind surfers”, and even got to witness the challenge involved in using the wind, a much more variant force than that of a boat (used for activities like water skiing), to get up onto the water.  The most experienced wind surfers still appeared to require a few attempts to get up onto the water.  By contrast, experienced water skiers seem to always get up on their first attempt.

Mostly, I observed the surfers catch wave after wave.  I wondered if these waves were better or worse than a typical Saturday on Pacific Beach.  I wondered how long it took the better surfers to achieve this level, and whether or not their form was truly as great as it appeared to an outsider like me.

Normally, my attention span would wane much sooner than this.  But I was capturing the moment.  And, also I was quite exhausted. 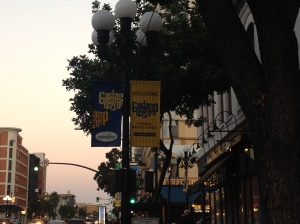 The previous afternoon, I had flown into San Diego and attended my friend’s bachelor party, which was mostly held in Downtown San Diego’s Gas Lamp Quarter.  Similar to the French Quarter in New Orleans, or Midtown Manhattan, this district is touristy and quite expensive, but not overly cheesy.  There are a few chain restaurants and bars, but many of the establishments are unique to San Diego.  The nightlife here is not confined to one or two stretches of a road, as in places like the “Las Vegas Strip”.  The entire square mile was majorly hopping, with restaurants, bars, loud music, dancing, and the sidewalks where quite full with patrons, most of whom likely spent upwards of $100 over the course of the night.

The main thing that set the “Gas Lamp Quarter” apart from similar districts in other large cities was how many times we were solicited, and how aggressively we were solicited, by wait staff at bars and restaurants while walking down the street.  Someone from nearly every restaurant we walked by would talk to us, and tell us about their food and specials and such.  The only other place I remember being solicited walking down the street was along Division Street in Chicago’s Gold Coast, and those conversations were always brief. 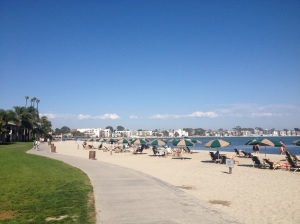 I only spent three days in San Diego, and a good chunk of it was tied up by the bachelor party, rehearsal, and the wedding itself.  So, I did not get a chance to go to Sea World, or any of the standard San Diego tourist places.  However, I did really appreciate where the wedding was held; At a resort called the Catamaran along San Diego’s Sail Bay.

At this location, I spent most of my time in the Pacific Beech (and Mission Beach) area.  Aside from the standard boardwalk, the neighborhood has several active roads with lots of restaurants and bars, and is the kind of place where you can find almost anything within a short walk of each other, as well as the beech.  Both during the day, and in the evening, streets like Mission, Grand, and Garnett were filled with people taking part in many different activities.

California is a unique place with a distinct culture, and although I was only here for three days, I did get to observe a lot of it for myself.  People here really do drive everywhere!  Even though Pacific Beech is a walkable area on a grid system, the type of area you would expect to be more pedestrian/transit oriented in another major city, almost everyone seemed to be arriving here by car.  And this means that parking is hard to find in a lot of places.  As we left the beech that day, we were asked by a car full of surfers coming to the beech where our car was, in hopes that they could take our parking spot. 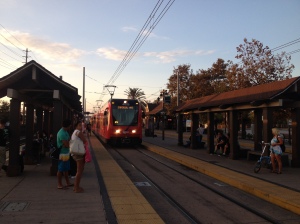 While San Diego does have a transit system, almost all of the people I talked to basically did not consider it an option.  I did ride on both a bus and the train.  The bus driver told me there were no “transfers” (i.e. from one bus to another or from bus to train on one fare), making the system seem inconvineint for most.

The fish tacos here are truly amazing!  And it really is the tortillas that make some fish tacos  more amazing than others.

There are tons of other foods that are somewhat unique to the area, including a lot of foods with avocado and/or sprouts.  I particularly enjoyed San Diego style fries, which include meat, cheese, avocado, and garlic.

Although Southern California is known to be less obsessed with football than the rest of the U.S., there are still tons of people who get really into football, both college and professional.

Bicycle riders are clearly divided into two types; One that rides hard core and comes out early in the day wearing full bike gear, and one that rides cruisers, goes about 10 mph, and only pedals when absolutely necessary.  The later group does not wear helmets.

People here in general appear healthy- about as healthy as Denver, and far more healthy than the Midwest.

I really wish to return to San Diego, as I still feel there is much more to do that time allotted.  In a future trip, I think it would be neat to actually take a lesson and learn to surf, spend some time in some of the other popular neighborhoods, and I would really like to have some sushi, as there is probably a lot of really good sushi here.  And, I definitely wouldn’t mind seeing more scenes like this one.