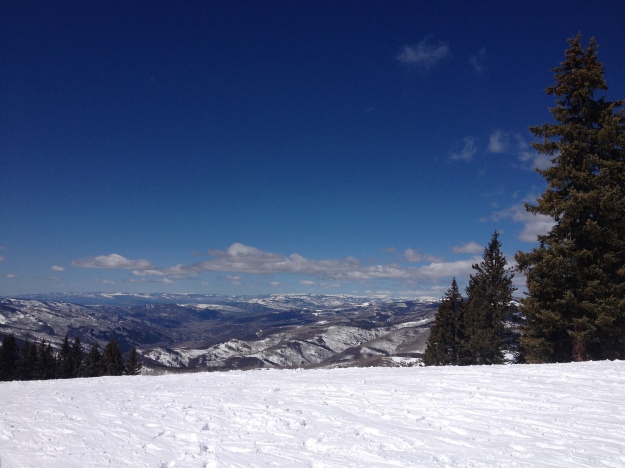 Last November, prior to the start of the 2014-2015 ski season, I attended a screening of Warren Miller’s No Turning Back.  The main part of this film is broken up into eight segments, each one featuring a different location around the world, and each one containing footage of extreme skiing or snowboarding interwoven into a storyline that describes the people and the culture around snow sports in that location.  This film’s primary impact is to get skiers and snowboarders excited about the upcoming season.  However, the introduction to this film actually contained a reminder that every ski season comes to an inevitable end.  A time lapse of a ski resort becoming progressively more green over time (during springtime) is shown while the narrator (of the introduction) compares skiing and ski season to “falling in love with someone you know is going to leave you in four months.”

Well, here in Colorado, that four month expiration date appears to be rapidly approaching.  On Friday (3/27), Vail ski resort, the largest in the state, was still being patronized by a significant number of snow sport enthusiasts.  However, signs everywhere are pointing towards the inevitable decline in the quality of the skiing that accompanies the transition from winter into spring.  Not the only recent day to feature temperatures exceeding 50F, sections of bare ground can be seen not only on the horizon, but also on many of the slopes themselves, particularly slopes that feature bumps on Vail’s back side. 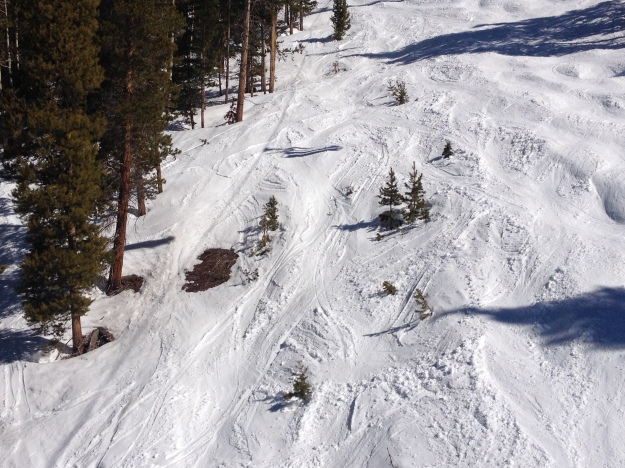 Increasingly, trails are either being signed to caution skiers of this variable terrain, or being closed off altogether. 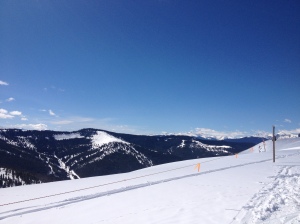 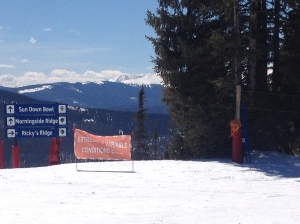 Conditions like these are often labelled “spring conditions”, a label that is both descript and non-discript at the same time.  Labels like “powder” and “groomed” are commonly used to describe the snow conditions on any given slope.  These two labels, amongst the most commonly used, provide a clear indication of what kind of snow a skier or snowboarder can expect to encounter.  When conditions are labeled as “spring conditions”, they are often quite variable.

Over the course of the day on Friday, I encountered all sorts of snow conditions.  There were parts with large clumps of snow, parts with hard packed snow, parts that were quite icy, and, of course parts that were very slushy.  I even managed to find a couple of spots with untouched new snow in the trees (I am not calling it “powder” as the snow is wet in variety, much like the snow one would regularly see in New York City).  I often encountered a significant variety of snow conditions while traversing a single ski trail.  Transitioning, often from hard packed to icy, and then to slushy, would cause sudden shifts in my weight distribution.  Being jerked, both forwards and backwards while skiing down the mountain almost made me feel as if I were at a rodeo.  Only, instead of being jerked around by a bull, angry that his reproductive region had been recently violated, I was being jerked around by what is labeled “spring conditions”.

Regardless of whether we ski, partake in some other form of activity, or just enjoy warmer weather, spring, and the conditions associated with it, do often jerk us around, much in the same way I was at Vail.  Springtime is not a slow and steady transition from winter’s chill to warmer weather.  It is often chaotic with wildly variant weather patterns that people in Oklahoma are unfortunately all too familiar with.

Sometimes, as is the case in the Northeastern U.S. this year, winter just seems to keep on going, maintaining it’s grip far longer than expected.  Those who eagerly anticipate spring’s warmth have a rough time with years like this one, as it almost feels as if nature is trying to torment them.  Other years are far more choppy.  In many parts of the country, this time of year can feature weeks that include both summer-like warmth, and snow, sometimes even within a day or two of each other.  It is not unheard of for an early spring warm period to trigger some to plant outdoors, only to have these plants killed by an unexpected hard freeze later in the year. 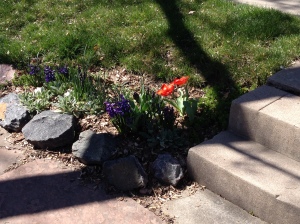 Much like all other aspects of life, at the end of one season comes another one.  And, while the season to play in the snow is coming to an end, spring brings with it a whole new set of opportunities.  For those whose one and only love is skiing or snowboarding, the end of winter can feel very much like the narrator of No Turning Back described it; as having a feeling similar to having lost a love after four months.  However, for those who are fortunate enough to have found an appreciation for all of life’s seasons, the end of winter, and the transition to spring, while an ending in one sort, is also a beginning, with spring bringing with it a new set of opportunities.

The main advantage to living somewhere with seasons, as opposed to somewhere with consistent weather, is the variety that comes along with these cyclical changes.  In places like these, each season is distinct from the last.  At different times of year, we go to different places, and do different things, and even incorporate periods of rest and renewal into the cycle.  It provides life with a clear breaking point that distinguishes one year from another; something that many lack beyond college and graduate school.  I will most likely be back at Vail ski resort, to once again enjoy some of the world’s best skiing, before the end of 2015.  When that occurs, it will certainly have the look and feel of a completely new ski season distinct from the one that just ended.  Until then, the time has come to go and explore different places, maybe chase some storms, take some longer bike rides, or visit some places that are much more easily reached without the threat of a blizzard interrupting travel.  The coming months will certainly feature some amazing experiences that I cannot wait to have, enjoy, and share.