Forecasting the weather weeks to months ahead of time can often be problematic. Computer models that project atmospheric conditions into the future typically only provide utility out to 10-14 days, depending on who you ask. After that, forecasts often become erroneous due to what is often referred to as the “chaos effect”. In fact, there are many that believe that forecasting the weather for a specific day is only useful out to roughly 7-10 days. Most people manage their weather expectations beyond the 7-10 day horizon not by forecasting a specific event, but by describing more general expected trends.  It is more common to say something like “It is likely that the period from 14-21 days out will be warmer and drier than normal across much of the Western United States”.

Scientifically credible seasonal forecasts tend to rely on larger scale phenomenon that have been shown to impact our weather in the past. Luckily, for this upcoming season, the winter of 2015-16, there are two such phenomenon that could give us some significant foresight into what we could expect out of this coming winter.

The first, and most obvious one is the strong El Nino that is already underway. Strong El Nino conditions typically bring wet weather to the Southern United States due to a strong sub-tropical jet stream. In particular, California can be the recipient of some heavy rainfall, which hopefully can help give the state some much needed relief from the extreme drought conditions than have been experiencing. The other major impact, on a national level, is that the Upper Midwest and Northern Plains tend to have milder than average winters during strong El Ninos.

Unfortunately, maps like this one often make it ambiguous as to what impact El Nino typically has on the weather here in Colorado. On this map, as well as nearly every map of El Nino impacts, Colorado is in kind of a neutral zone, where areas to the south are wetter than usual, and areas to the north are drier than usual. However, as any resident of Colorado knows, Colorado’s rugged terrain has a significant impact on the weather here. Therefore, it is possible to discern some more local impacts that occur here in Colorado, as different large scale wind patterns are impacted by Colorado’s many mountain ranges. There are many sources of information regarding how Colorado fares during a strong El Nino year. Below is a graphical summary of these impacts.

In addition to El Nino, there is another major weather feature that could have a profound impact on our weather this winter. Not only are there warmer than normal ocean temperatures along the equator associated with the strong El Nino, but there is another section of extremely warm ocean temperatures in the Pacific Ocean farther north. This section of warm temperatures off the west coast of North America is being labelled “The Blob”. “The Blob” formed due to a persistent period of warmer and drier weather over the past several years. This is the weather pattern that lead to the extreme drought in California in the first place, and, now threatens to keep much of California in drought conditions despite the El Nino. 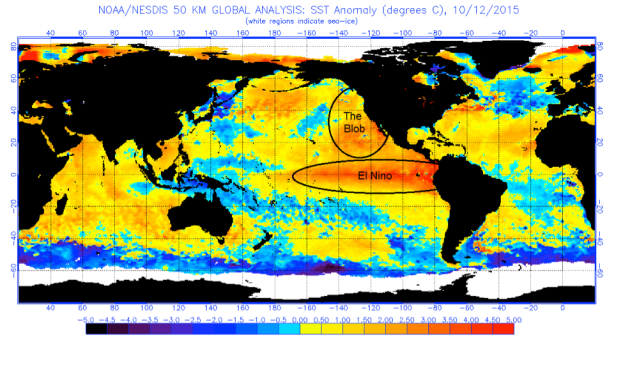 The easiest way to describe the impact “The Blob” is going to have on our winter weather is that it is going to try to produce conditions similar to last winter. Last winter was warm and dry over much of the West due to a persistent ridge, labelled “the ridge of death” by snow enthusiasts at OpenSnow, which is often associated with warmer sea surface temperatures off the Pacific Coast of North America.

While it is hard to imagine “The Blob” completely overwhelming the impacts of this historic El Nino, it does have the potential to modify them. Firstly, it could make the Pacific Northwest drier, and reduce the amount of rainfall California receives, particularly Northern California. Over Colorado, more frequent ridging, and/or dry Northwesterly flow aloft will reduce the likelihood of major Front Range upslope snowstorms, and increase the likelihood of a drier than normal winter over parts of Central Colorado, including many of the major ski resorts such as Vail, Breckenridge, and Copper Mountain. Those who hate extreme cold, though, will be comforted by the fact that the likelihood of sub-zero conditions across most of the state will be significantly below average this season.