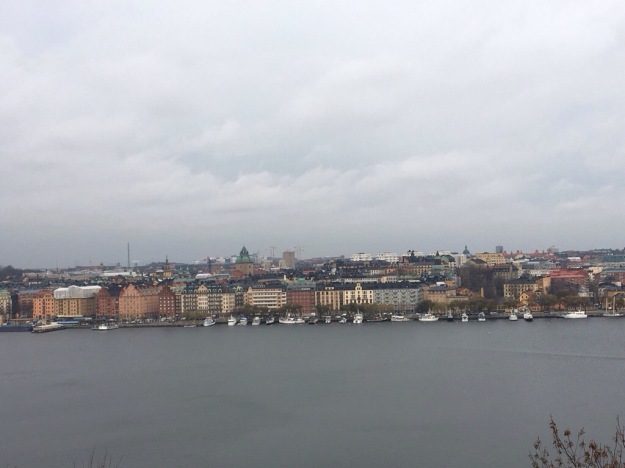 Setting out to observe a 3 P.M. sunset, in all its glory, is actually significantly more challenging than one would ever expect. Spending four days in Stockholm, I came to the realization that anywhere one would go in November or December where the sun sets this early is likely to be quite cloudy. While the sun did slip below the horizon right around 3, and the sky became pitch black before 4, each afternoon the sky pretty much appeared like this. 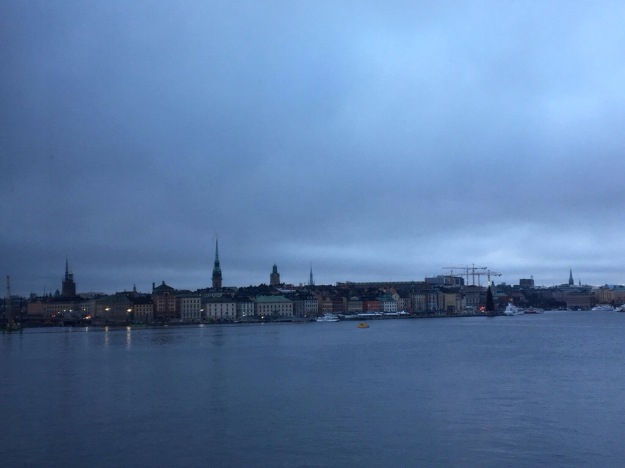 There was no observation of the sun dipping below the horizon at 3 P.M., just a gray day fading gradually into nighttime.

Not only did 4 P.M. feel different here than anywhere I had ever lived, so did 8 P.M. Rather than feeling like the time the night was just beginning, when people were prepping up for their evening activities, getting ready, texting friends, etc., it felt like a lot later. I am not sure if this was 100% due to the fact that it had already been dark over four hours, or if it is due to cultural differences (when people leave work, etc.). However, at 8 P.M., it definitely felt like the “night”, whatever that entails, had been going on for some time and was approaching maturity. 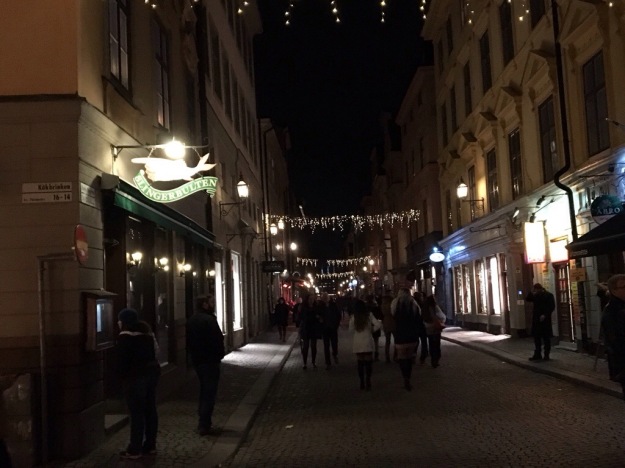 Stockholm is a city that parties pretty hard on Friday and Saturday evenings. Both evenings, in the area in and around the city center, including the areas around Central Station, and the Islands of Gamla Stan and Södermalm, there were plenty of people who were already quite intoxicated by 8 or 9 in the evening. 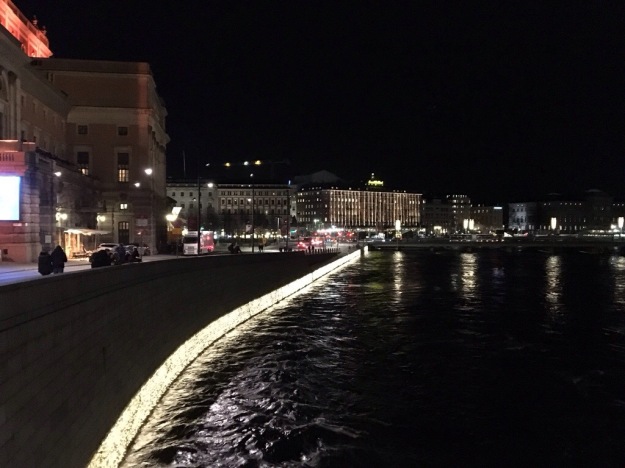 This is one of several cultural observations I made while in Stockholm.

Of course there are ways to learn about the culture of a country or a region from afar. Travel books and other essays provide convenient cultural guides to places. Popular culture, music, movies, shows and such, also give people from afar a window into the culture of a place. However, I do notice time and time again, that there is no real substitute for actually going to a place and experiencing it for oneself.

For example, one of the things I noticed about Stockholm, the entire time there, was that people walk fast. It’s almost like the way it is in New York, and other large cities.

This is a prefect example of something needed to be experienced in person. While it is possible for someone to write, in a cultural guide or video, that people walk fast in a certain city, what that means can only be truly understood when experienced. The same can be said for New York. 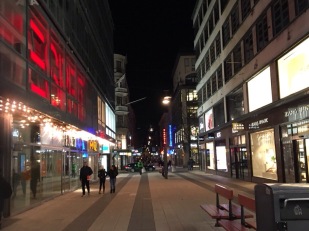 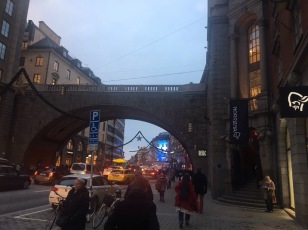 Also, with the exception of New York, a city that seems to take pride in its high paced walking, it is easy to imagine a quick reference cultural guide which may focus on things like tipping or train etiquette, to not mention something like this. After all, did I really need to know how fast people in Stockholm walk prior to coming here?

I benefited more from reading about how Scandinavians dress. The casual sneakers, jeans and sweaters I wore all week did not stand out. 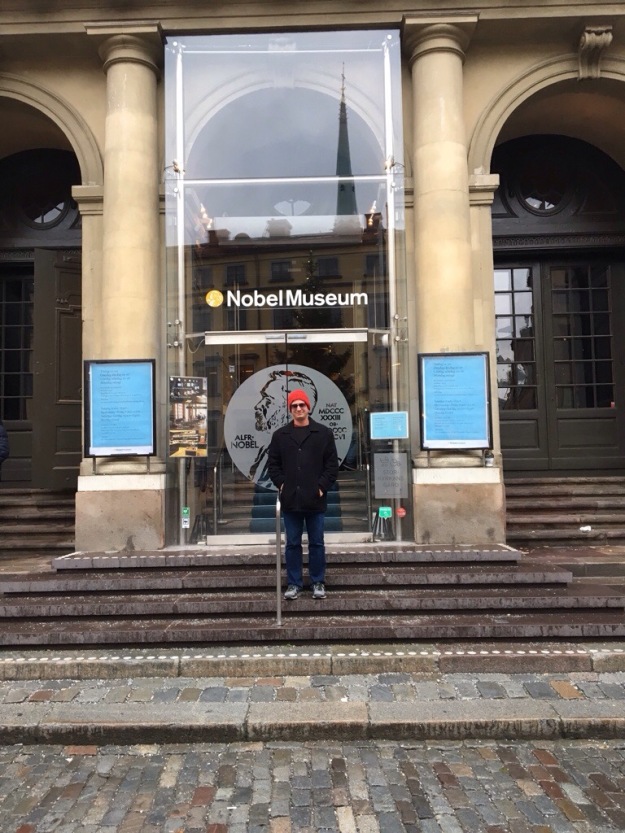 In fact, I may have fit in too well. Despite the fact that people here are mostly fluent in English, most addressed me in Sweedish before I had to ask them to speak English to me. 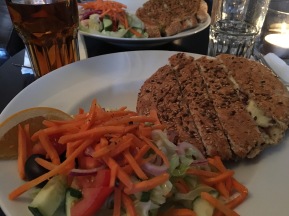 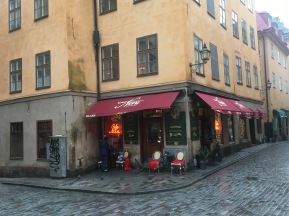 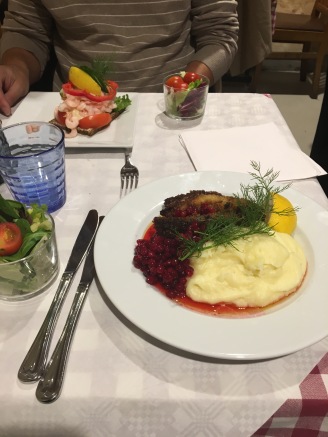 Food is a significant component of any cultural experience. There is a reason why food makes a natural topic for travel shows. I couldn’t picture actually trying to experience the culture of a given place without trying the local food. I made sure I got the full Sweedish food experience, including the Skagenröra (shrimp salad), salmon, and various other fish dishes (Stockholm is a bunch of islands after all). However, I was surprised at how good their grilled sandwiches were. Specifically, many places throughout Stockholm serve various types of grilled sandwiches, all with some kind of cheese. Many of these sandwich did not include fish or seafood. Some were even vegetarian. They do an excellent job of melting the cheese on the rye bread, and this serves as a great lunch option for various types of people (as in, not everyone eats meat, seafood, etc.). 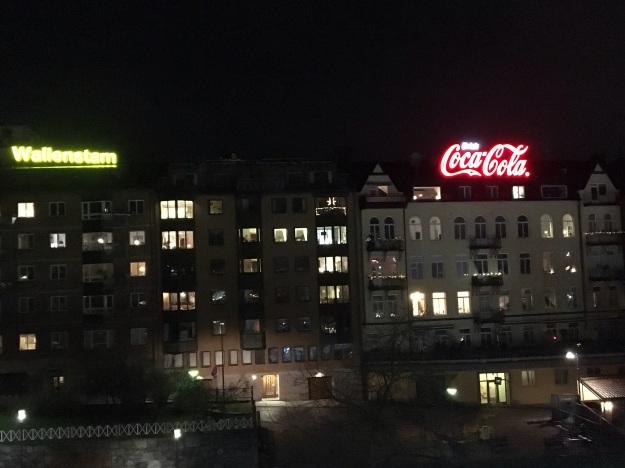 As an American, traveling abroad to places like this, it is hard for me not to feel at least a little bit guilty. American culture is harder to escape than I ever realized. Stockholm does have fast food as well. Most of it comes in the form of stands, similar to the hot dog stands found on the streets of New York. Given that most of the food in Stockholm is pretty expensive, it is almost necessary to have a couple of meals at one of those stands on any multi-day trip here, so as not to bust a budget. This was, however, the only place I encountered someone who did not speak English.

I also saw McDonalds and Burger King all over town. However, these establishments are at least somewhat different abroad than they are in the United States.

Perhaps my biggest disappointment was that I was unable to escape the tradition known as “Black Friday”. I was hoping, by virtue of not being in America, where thanksgiving is not a holiday, I would also not experience Black Friday. Well, apparently people do that here too. Maybe they don’t in less touristy parts of a country like Sweden. Maybe I needed to go somewhere with less tourists, and, also less people who speak English, to experience the actual culture of Sweden. 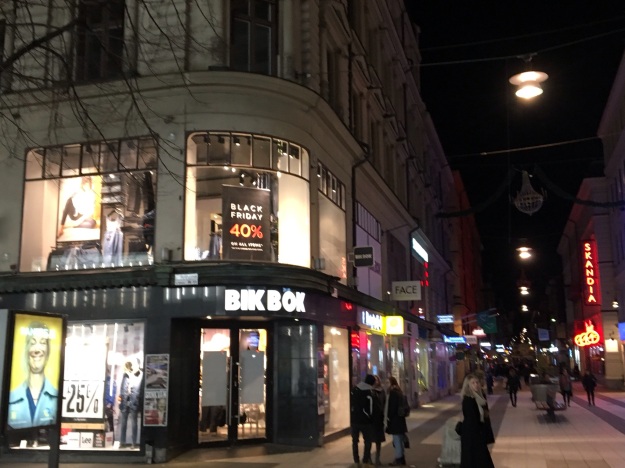 How much can anyone get to know about the culture of another country by visiting for just a short time? And not venturing outside of the City? I can see how a tourist can come to believe they have learned quite a bit about the culture of Sweden, or any place they chose to visit, by making an set of observations like these.

To me, my set of observations almost feels like how someone from abroad would judge the United States by simply spending several days in New York, our biggest city. The rest of the country i likely significantly different, in terms of pace of life, and how much they embrace ideas like Black Friday. However, just like the foreign tourist in New York, I did experience some things different from what I usually experience at home.