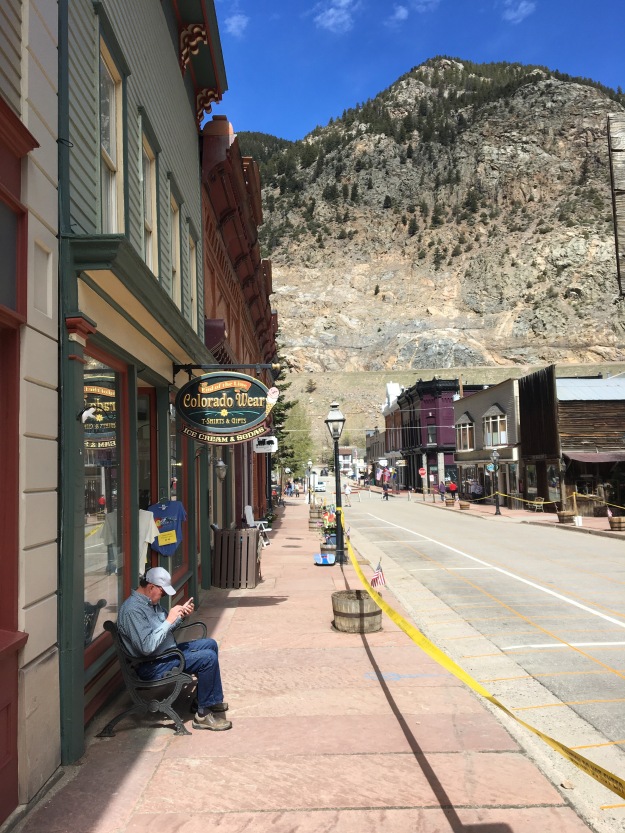 Everybody has that place in their lives; a town, a neighborhood, or maybe a specific restaurant. We always pass by, on the way somewhere, thinking “this place looks neat”. But, for some reason every time we pass through, we are, well, on our way somewhere. So, we drive by, time and time again, saying to ourselves that one day we will find a reason to specifically visit this place.

That place for me is Georgetown, Colorado. It is situated along I-70 50 miles West of Denver, on the way to many mountain destinations, including ski resorts Breckenridge, Copper Mountain, and Vail. The first time I saw this town from I-70, I thought it looked like the kind of village commonly depicted in a model train set, with its mountain backdrop and homes on multiple tiers. For years, I just drove past this town. I think I may have stopped there once or twice to pick up some quick food before going up Guanella Pass, but never spent any meaningful time there.

That was, until I found out about the Burro Races.

I must admit that many of the events I attend are ones I get invited to with no prior knowledge. Some of my best experiences are when I just went along with someone else’s strange-ish idea. I am a big proponent of self-determination. However, that self-determination needs to be accompanied by some degree of openness. Otherwise, we get in ruts, going to the same places and taking part in the same activities over and over. An event where people race burros up and down a mountainside is certainly not what I would call “ordinary”. 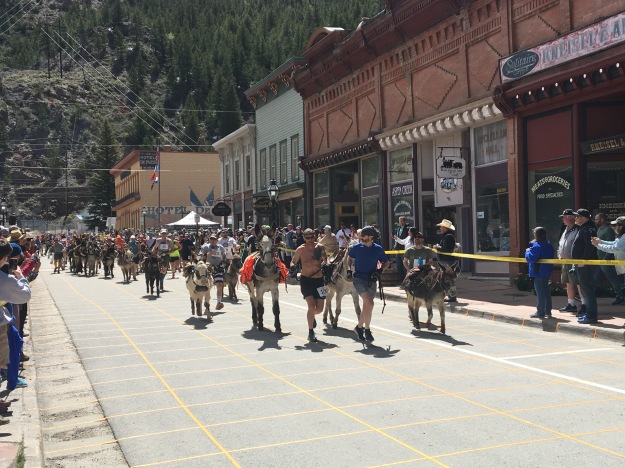 The event itself included a lot of other out of the ordinary activities. The most interesting was The Burro Poop Drop Contest. Participants pay $10 for a square. These squares are laid out over a city block in front of the starting line. The square that ends up with the most poop wins! I think there are prizes for second and third as well.

Mine didn’t win, but most of the good ones (in the middle) were taken by the time we arrived. 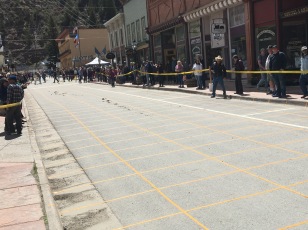 The event I did win at was the poop toss. 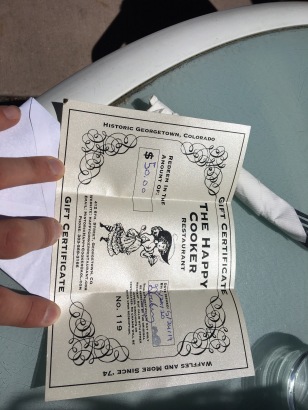 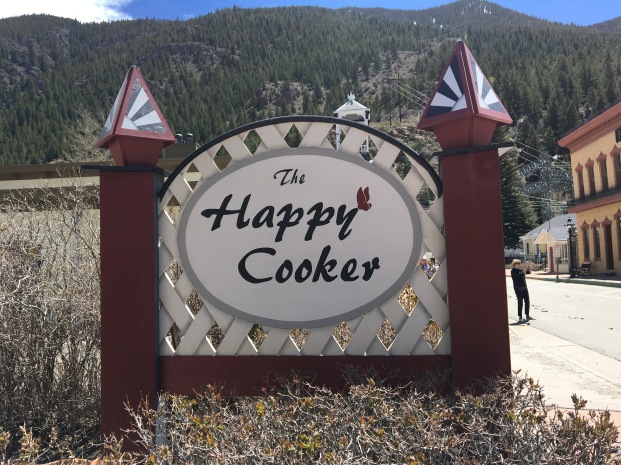 This event is essentially bags (or cornhole or bean bag toss depending on your regional dialect), with bags shaped like burro poop, which made them bounce in weird directions. I guess they really like to celebrate burro excrement at this event! I was able to win a $50 gift card to a restaurant, which happened to be located right at the finish line! 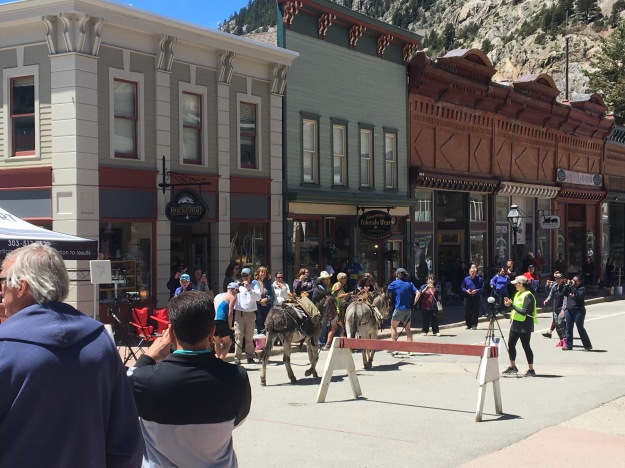 We were able to eat our food while also watching the end of the race.

The main thing that surprised me about the race was the fact that the participants were not actually riding the burros. They were running alongside them, almost walking them like we do our dogs. I guess there has to be a reason for that, but I did not get a chance to talk with the participants long enough to find out. 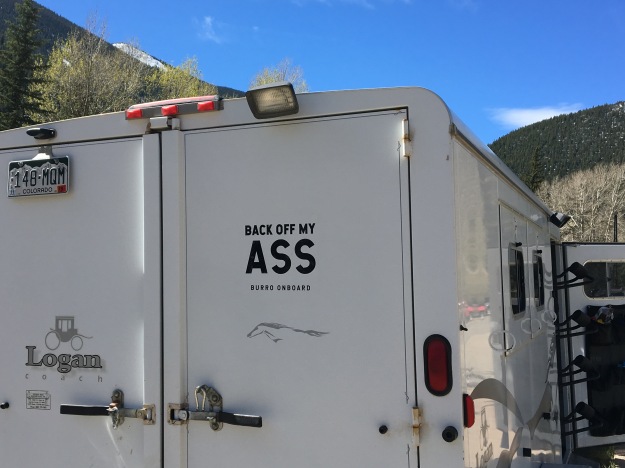 What I did learn was a bit about the town of Georgetown. Compared with more touristy towns like Breckenridge, Vail and Winter Park, it has way more of a traditional small town/ country vibe. While everyone was lining up for the race, the speakers played mostly country music. The town has one of those neat general stores that we still commonly see in small town America. 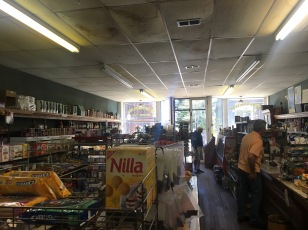 These are a blast from the past, the type of stores I encounter all the time on storm chases, bike tours, and other trips to rural parts of the country. In this cities and suburbs, we have stores that sell “everything”, but they tend to be large warehouses like WalMart and Target. When I encounter a General Store like this one, I feel like I am entering a different realm of human existence. A place where people don’t always feel the need to have every option available to them. A place where people have time to engage each other in casual conversation. This could be a place where people are okay with having a little bit less in exchange for a more personal experience.

The homes in this town also reminded me of the past. A few have a creek running through their yard, reminiscent of medieval homes, with moats for protection from invaders. 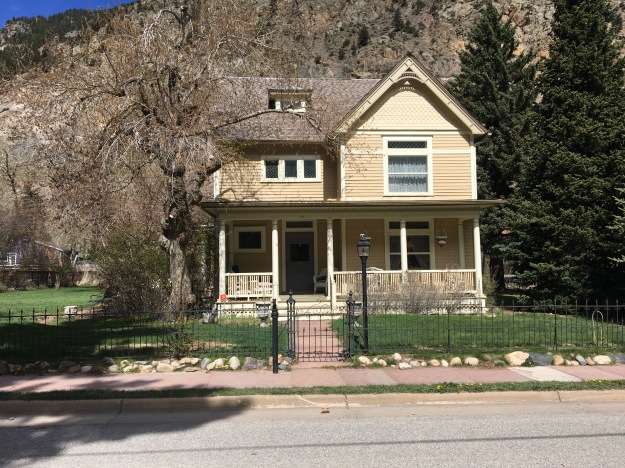 I’ve often wondered if people in places like this are happier. However, they probably have a completely different set of problems I am not even thinking about. At this one point in time, watching burro races and partaking in interesting events, I was quite happy, and it seemed like everyone else around me was happy. However, I do not know what life is like here on a typical weekday, or on the day when the frustrating spring snowstorm hits making it impossible for residents to get out of town. We live in an era of divisiveness, where people have short attention spans and often don’t take the time to truly understand others before passing judgement on them, whether that be one of envy or disgust. I feel like the only judgement I can make upon Georgetown right now is that they are at least fun enough to participate in an event that revolves around burro excrement once a year.