Opening and closing a tent has a certain familiar look, smell and sound. Over time, our brains come to associate what our senses observe with types of experiences and often the emotions that go along with them.

While my summer was active, it was active in a way that involved somewhat less outdoor activity than the past several year, and not much camping. It felt good to using the tent again, and having the experiences associated with it. The smell of the nylon tent and the sounds of the zipper going back and forth brought back associations with things that I love.

East Lost Lake was perhaps even more beautiful the next morning, which was not as cold as the previous day, yet, still cold. 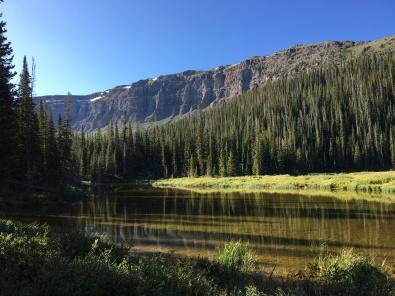 A lot of people fantasize about living in the mountains. I have even thought about it from time to time. Experiencing cold mornings in mid-September gave me a glimpse into one of the downsides of living at these higher elevations. Those of us that live at lower elevations come up to the mountains during the best and exciting times of year: ski season and summer. Skiing is, of course, fun and exciting. Summer days at these elevations are pleasant.

However, mornings, even in the middle of the summer are quite chilly. Morning temperatures at these elevations are 35°F to 45°F (2-7°C) in the middle of summer! At this point in time, while some towns were looking forwards towards fall festivals and the changing of the leaves, after that will be a period of time that is not so exciting, with mornings that would be cold enough to prevent me from biking to work.

We stopped at the last in the series of alpine lakes, West Lost Lake to fill up with water.

Then we began to climb again. 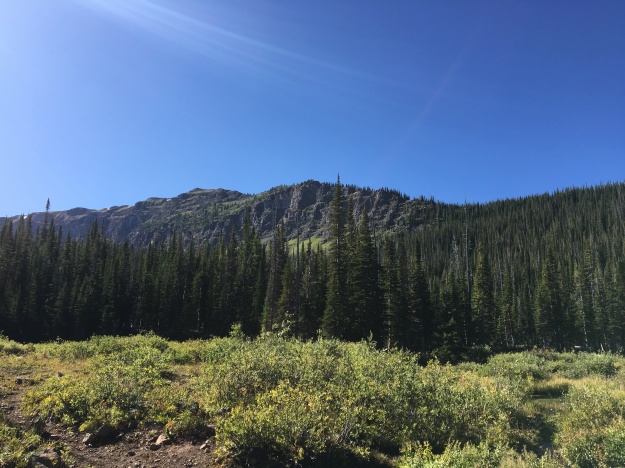 Like Friday, Saturday would feature a significant late morning climb. This one would take us up out of the woods and on top of one of a broad mesas. 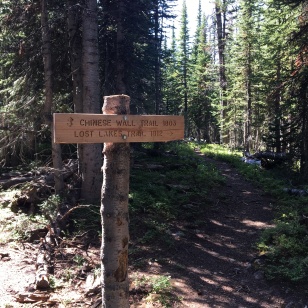 We would spend most of the afternoon along the mesa, periodically gazing at the features below. At one point, we were actually able to see where we had just camped the night before.

That afternoon, we would encounter a different issue. While in the woods, the trail was well marked the entire way. On the mesa, the trail all but completely vanished in places. We were just walking across a large grassy field hoping we were going the right way.

That’s the advantage, as well as disadvantage of selecting a trail that isn’t widely used. We would actually go the entire day without encountering any other people. However, that also means that there isn’t regular foot traffic to maintain the trail.

Sometimes the most frustrating experiences are also the most rewarding. We spent the afternoon looking for the trail, often getting excited to find the sections of it where the grass had not fully regrown. We also occasionally found ourselves in some tough places like this section of shrubbery near the edge of the mesa.

At one point, we actually did make a wrong turn and went out of our way. However, it ended up adding less than a mile to our overall trip, and gave us one of the best overlooks of the day!

We camped above treeline, which was an interesting experience. I’d never thought of that possibility as we’d typically want to find campsites where we’d be able to find firewood. However, with gas stoves, it is possible to cook dinner without a fire, and we were able to find an unexpected water source.

Camping above treeline reminded me that life is not about following rules and procedures. It is about taking care of needs and solving problems. Rules and procedures can serve as a good general guide, but there are always going to be situations that require different solutions.

At this point, we were too exhausted to want to continue on to get back down below treeline. Going off trail to get into the trees would have involved carrying our heavy packs down a fairly steep area. The solution ended up working out.

With clear skies and no fire, it was the perfect evening to watch the mid-september full moon, or “harvest moon”, come up from behind the mountains. 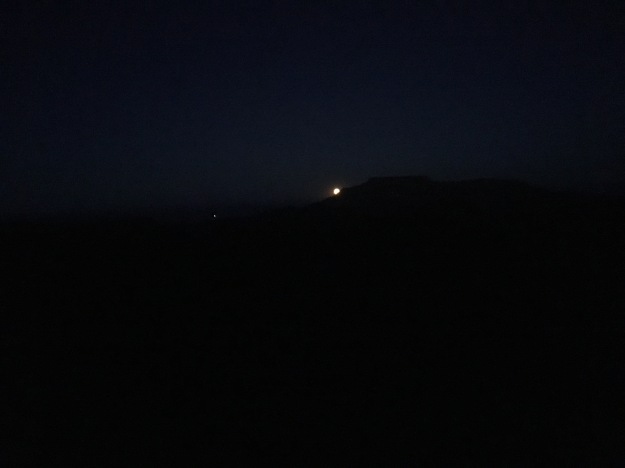 With respect to both going the wrong direction for a short amount of time and being cold without a fire, both frustrating experiences lead to something magical in the end. It was an incredible day that reminded me of several important life lessons.