In some ways, it feels as if I never left.  I go about my business from instinct.  I do not need to look up where things are, think too hard about how to get there, and fret about to expect from the people around me.  It is all still very familiar, fresh in my memory.  Things like how the streets are laid out, where the traffic lights are, or where and how to board busses and trains are still like second nature to me.  It is what makes a place feel like “home”.  It is what many people miss after a couple of months moving to a new town, as, for most, it takes time to become truly acquainted with a city, the customs, the energy, mannerisms and the like.

It’s now been nearly four years since I moved away from this neighborhood of Chicago, situated several miles northwest of downtown, near the halfway point between downtown and O’Hare International Airport.  Four years has always been a fascinating length of time for me.  I was a teenager when I first observed the significance of this length of time – four years.  I’ve always been fascinated with observing people, what makes them the way they are and how that changes over time.  I’d think about people, including myself, who they were, what kind of life they are living, what activities they are taking part in, and what their expectations are.  These things were likely to be quite similar one year to the next, but after a four year time frame, significant differences would be observed in most people.

This may be cultural, as we are trained from a young age to break our lives down into four year increments (high school, college, etc.).  But, I noticed something else too.  It felt as if four years was how long certain unintentional transitions took to manifest.  It’s how long a person can passively absorb a new culture (by passively I mean neither actively embracing nor resisting it) before starting to also reflect it.  It is how long one can go without talking to someone before it really does start to become awkward to meet again. 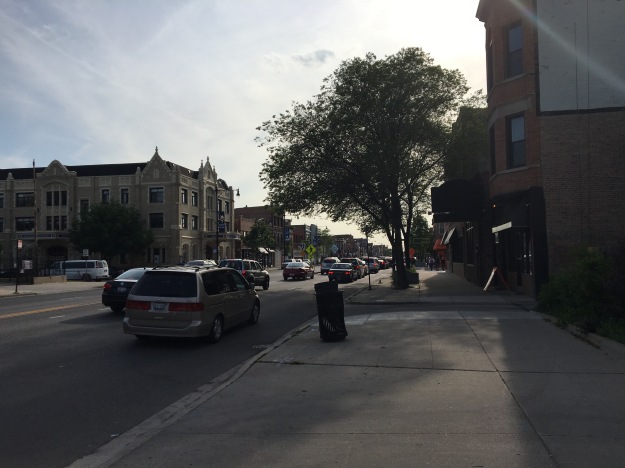 It’s not like everything is exactly the way it was four years ago. No place really works like that.  Over the course of time, things change: A store goes out of business, a new one pops up, a few places renovate their buildings, new signage comes in, etc.  We are accustomed to this gradual change.  In the place where we live, we do not even notice it.  It’s kind of a seamless flow.  However, after several years, the cumulative effect of all the new development becomes noticeable.  This Logan Square, the one I returned to in June 2016 is not different enough to feel foreign to me.  It feels more like when a best friend gets a different haircut, or when a house gets one room remodeled.  It’s still the same person.  It’s still the same house.  It’s still the same Logan Square, just with a couple of new features.

Logan Square is also a neighborhood in transition.  It has been for a long time.  At the turn of the century, when the renewed interest in urban living following the crime reductions that took place in many major cities during the 1990s was still a new thing, Logan Square was still run down, and kind of edgy.  It would take a few more years and several thousand more young people searching for the new urban life.  However, Logan Square was destined to become a destination for young urban professionals.  The CTA blue line runs right through the heart of the neighborhood, giving residents easy access to both downtown and O’Hare airport.  Logan Square is somewhat of a hybrid neighborhood in this sense. It is possible to live here car free. But, car ownership is not the burden it is closer to downtown, where monthly parking can get quite pricey.  Most residents pay something like $100 a year (I’m not sure what it is exactly now- not something I keep up with) for a neighborhood city sticker. 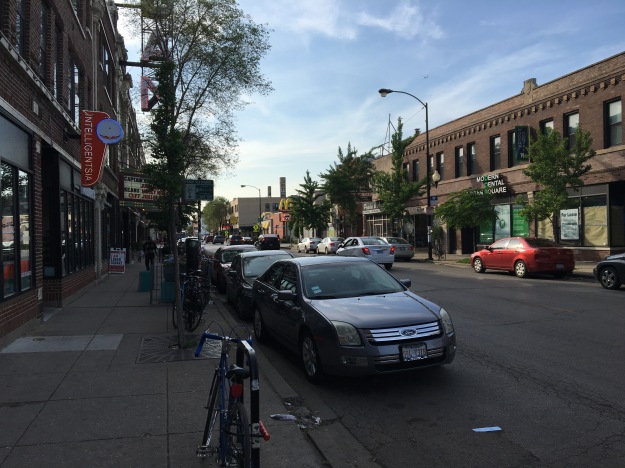 The Logan Square I came back to was a Logan Square with somewhat more energy than it had several years ago.  There were more people walking around.  There was more nightlife.  There were more buildings, and a lot of new restaurants, bars, shops, just places to go in general.  This should not be surprising.  It is just a continuation of the trend that I had once been a part of.  Logan Square felt more energetic and more alive, but it definitely maintained most of its individual character.  It felt like home- just a slightly livelier home.

The weekend was fast-paced, and full of events, taking me from one side of the city to the other.  Due to time constraints, I took far too many Uber rides, as it would have taken longer to take trains and busses everywhere.  I recall going up and down the Kennedy and Dan Ryan expressways, passing from one side of town to another over and over again.  This is the part of a busy weekend, which is mostly about scrambling around to as many events, and seeing as many people as possible, that fades into kind of a blur.  It’s just a blur of nighttime expressway riding, going through Hubbard’s Canyon and riding by the new Whirlyball building a whole bunch of times.

Trips back to Chicago always feel like a whirlwind for me.  Trying to spend time with family friends, etc., see as many people as possible.  But, there is more to it than that.  Everything around me seems to happen faster here.  There is something about dense urban environments that make me, and probably others around me as well, walk faster, move faster, live faster.  Events happen and plans come together much quicker.  It’s like there is something in the air, or something about seeing a lot of buildings, people, and just stuff going on all around us that makes us want to pick up the pace.  If there is one thing I truly miss about Chicago and my life there, it is that.