One of the hardest truths to accept in life is that you never know when opportunities are going to run out.  There are all kinds of reasons life gets interrupted; new job, new city, new responsibility.  And, before you know it the opportunities for certain activities have come and passed.  This is why I embrace opportunities when they come about, unless I have a good reason not to.   In other words, I make yes a default.  It’s kind of like how in the United States, when you are on trial, you are considered innocent until proven guilty “beyond a reasonable doubt”.   I tend to say yes to things unless I have “reasonable doubt” about them for one reason or another (or another prior engagement, which is actually by far the most common reason I refuse invitations to anything).

Consistent with my desire to fully embrace the Colorado Rocky Mountain experience, when I got invited to climb another mountain, Mount Bierstadt, eight days after hiking my first 14er (peak whose elevation is greater than 14,000 feet), I accepted.  Although, the more I think about some of the interactions I have had with people around town, the more I realize that climbing mountain peaks at this frequency is far from unheard of.  I think I remember hearing about people climbing 10 in one year, which would have to involve at least 5 days (most likely more) of climbing, or 5 weekends, out of about 15 weekends from June to September where climbing these mountains does not involve trudging though excessive amounts of snow. 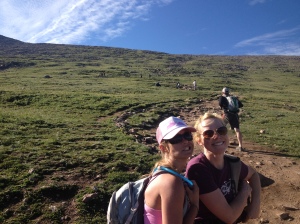 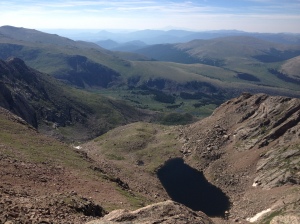 This particular trip came about when one of my friends wanted to take a friend from out of town on her first “14er”.  Despite this being her first climb above 14,000 feet, with more hiking experience than me, she is a stronger hiker than me.  Mount Bierstadt is actually one of the easiest “14ers” to climb, and it is also fairly easy to get to from Denver.  So, we were actually able to sleep relatively late, leaving Denver just after 6:00 A.M., not arriving at the trail head until about 7:30.

I already notice a few differences between this hike and the one I did last weekend.  This hike seemed to be about the same difficulty as the last one (Gray’s and Torrey’s Peak) minute for minute, but it lasted less time.  It took us only two hours and fifteen minutes to get to the top, and that is with me slowing my more experienced hiking partners down.  There was also not as much of an intimidation factor as there was at Gray’s Peak.  In fact, I was not even able to point out which mountain we would be climbing at first glance,  which I most definitely was able to at Gray’s and Torrey’s.  I had heard that this mountain was known for having “false summits”, where it looks like you are reaching the top of the mountain based on your viewpoint, but aren’t actually at the top.  There were a couple of places on this hike where I felt that way, but I still think there are more “false summits” at Rocky Mountain National Park, possibly because all of those hikes are mostly below the tree line, and therefore are in the woods where you can’t see as far.

The other thing I encountered on this mountain were guys, mostly by themselves, and mostly wearing headphones, practically running up the mountain.  My guess is that they are quite experienced with these types of hikes and were trying to make the best time possible.  I wonder how long it took them to get to the top, because I considered 135 minutes to be a decent time.  I really don’t see myself ever getting to this level.  In fact, seeing this does give me reasonable suspicion about going on a hiking trip like this with some of the most hard core people I know.

It reminds me of the saying that no matter how good you get at something you will always encounter someone better (although there are exceptions; Michael Jordan, Usain Bolt, etc.).  It is impossible to fully enjoy any activities like this without accepting this fact, and learning how to be satisfied with your own progress (as long as you find it acceptable) regardless of what you see from others around you.  This is the only way a beginner can get on that mountain, basketball court, or ballfield, knowing they’ll look a bit silly the first couple of times, but that even those most experienced participants around them were also once the newbies in awe of the performance of others, insecure about whether or not they truly belong. 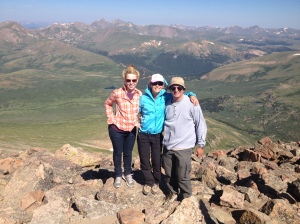 I decided not to take a picture with that sign that they pass around, with the name of the mountain, the elevation, and the date.  Maybe I was a bit scared to hold the sign, as it was significantly windier on this hike than it was on the hike I did last weekend.  While on the mountain, I wondered if this mountain tended to be windier than the others, as Colorado’s terrain causes a lot of small scale variations in weather.  However, on the way back to Denver, I noticed it was still windy.  So, I am thinking that Sunday was just a windier day, which makes sense because Friday and Saturday were stormy in the mountains.  This picture, I think, makes it pretty clear that we were  on the top of the mountain. 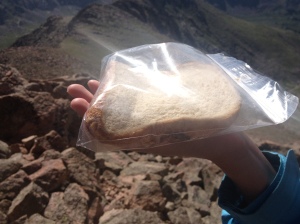 Another interesting occurrence was what happened with the sandwich I packed in Denver, and ate at the summit of the mountain.  I guess this photo above proves that I pack my sandwiches well, as the bag expanded significantly due to the pressure decrease of being at a higher altitude.  Denver’s atmospheric pressure is around 850 millibars (sea level is just over 1000).  At 14,000 feet, the pressure is only about 600. 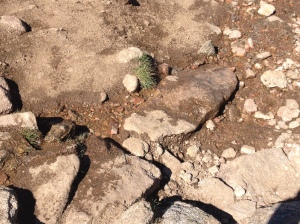 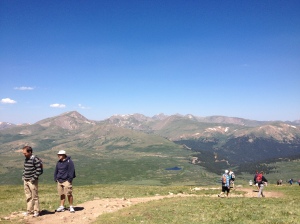 The trip back down the mountain was somewhat treacherous.  The part near the top is something often referred to as a “scramble”, which basically means that rather than a clear trail, it is mostly just rocks that you just kind of self-navigate the best path up.  This was the hardest part on the climb up the mountain, as it is pretty steep, at a high altitude, and required me to do a bit more with my upper body to propel me around the rocks.  Somewhat lower on the mountain, there are several areas with little streams that actually made the trail a bit wet.  On the way up the mountain, I did not care about this, but on the way down it did kind of worry me a bit.

Additionally, the time we were descending the mountain, from roughly 10:20 to 12:20, there seemed to be an even mix of people traveling in both directions (upwards and downwards).  I am guessing that since this hike is somewhat shorter than most “14ers”, it is more acceptable to get a somewhat later start here.  All of these factors probably made the trip down the mountain take nearly as much time as the trip up the mountain.  I really need to stop expecting the downward trip to take too much less time as the upward trip, but these are the kinds of things that we all learn through experience.

The only real annoyance on this particular trip was the traffic on Interstate 70 on the way back to Denver in the early afternoon.  I was told that is to be expected on any summer Sunday in Colorado, but for some reason all of us had just simply forgotten about this, and not really planned for it.  They are widening part of the road to three lanes in each direction, and the construction may have made the traffic worse.  Hopefully the additional lanes will make traffic move faster in the future.

I spent most of the day today (Monday) being worn out, but was back to my normal energy level sometime in the afternoon.  Maybe I am lucky that my energy recovers quickly, but I think part of the reason for it is that I embraced an active lifestyle long ago.  I started making yes a default long before the Jim Carey movie Yes Man came out, and, as a result, I have been on top of the world three times this month.