I decided to break with a previous precedent I had set in this blog to only post one entry about a day’s travels.  In retrospect, some of the entries I posted a couple of months ago, which combined several activities into one post just because they were done on the same day seem like they may have come out a bit awkward.  In reflecting on the travel writing I had previously read, they appeared to make breakouts by experience way more than date.

Since I had already traveled to the South and West along highway 285 to get to Staunton State Park today, I decided to continue along the road a bit to get to Fairplay, Colorado.  By looking at my DeLorme Atlas, and then doing a subsequent Google search, I determined that the show South Park, is based (some argue loosely) on this town.

As someone who is a fan of this show, it probably sounds stupid that it took me over a decade, as well as over a year after moving to Colorado, to figure this out. But, I am not one to base my life around T.V. shows.  I feel like people nowadays focus too much on T.V. shows.  I get exhausted by conversations about T.V. shows, and saddened by people who appear to posses a greater understanding of the lives of fictitious characters on a weekly T.V. show than the lives of actual people who should be important to them.

In South Park though, I see a show that can come to represent something more.  Most shows people watch are entertaining, but don’t change anyone’s lives.  Sometimes, a groundbreaking show like Seinfeld will come along, but Seinfeld mainly changed the course of television, not history or society.  There have been shows like Fresh Prince of Bel-Air that produce commentary about real issues from time to time.  But South Park has come, to me at least, to represent an actual societal development.  It has come to represent the courage to retain the right to think individually, and come to a critical conclusion of almost anyone or anything regardless of what level of esteem they have come to enjoy by long-standing institutions or large groups of people.  It is the anti-group think, and the backlash to the political correctness movement of the 1990s.

However, the South Park Museum in town has absolutely nothing to do with the show.  But, it was a really good museum depicting life in the west in the 1870s/1880s.  The town was somehow preserved exactly as it was in that era, even down to the layout of the street and buildings.  There is even a historic train at the far end of the street.

Over 40 buildings were preserved, from homes, to the general store, saloon, blacksmith, and all of the quintessential buildings needed to make a true “old west” town.  Each building contained a significant amount of artifacts from that era, and museum attendees could actually walk through almost all of them and see most of the items used in day to day life here up close.  Walking through all of these buildings, I could actually imagine myself back in the old west.  I could picture myself living the life of the 300 or so residents of this town during that time period.  Overall, I have visiting my fair share of recreations like this, and this one has been the most realistic! 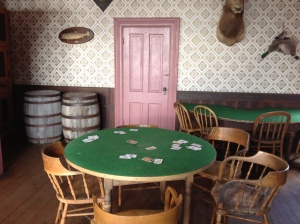 It is quite rare that any kind of museum, or historic town can lead to someone actually imagining themselves to be there!  However, there I was, imagining myself washing my clothes at the wash house, picking up supplies at the general store, boarding the train, and even getting involved in a game of cards at the saloon as if I were in the movie Maverick.  And all this was after I was expecting an entire museum about an animated T.V. series!

Also included in this museum was a 10 minute film strip about the town, and some basics about the history of the area.  All of this is not too far out of the ordinary.  As I visit more historical locations throughout the west, I have come to the conclusion that two themes are emerging from the beginning of the white man’s history of the west; fur and gold.  Most of the trails and even some of the towns in the area appear to have been established by fur trade, or gold rushes.  However, every gold rush appeared to have come to an end within a decade.  Some towns, like this one, found another niche (in the case of Fairplay it was ranching, and being a business center and county seat).  Others, like the ghost town I wandered through this past weekend, simply died when the gold ran out.

Overall, though, I can’t help but find it somewhat ironic that the history of the west was forced so much by fur and gold.  So, it feels to me that as much as we want to characterize the old west with images like this one.

I can’t help but think that since most of the early settlers were searching for fur and gold, the old west can be just as easily characterized by images like this one. 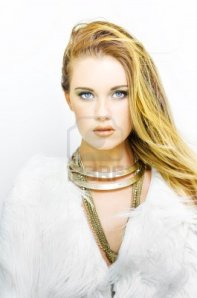 This recreation of the old west town was, of course, walled off from the rest of the town that was significantly more modern looking.  A few gift shops appeared to be trying to capitalize on the town’s association with the show, but not as many as I had expected.   The town had a somewhat similar layout to most small towns I am familiar with, with a central business district, and some larger shops and houses on the outskirts.  But, compared with the only other town above 9000 ft. I have spent a significant amount of time in, Breckenridge, it was a lot less dense.  The central business district was quite spread out, amongst a few streets and a fairly large area. 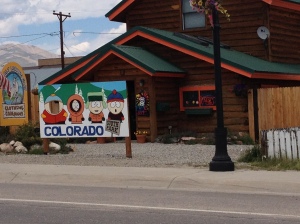 The one thing that definitely did remind me of the show, though, was the mountains outside of town.  Some of the mountain views from near town actually seemed to appear almost exactly as it appears in the cartoon.

On the return trip, I once again encountered the Colorado Trail, at Kenosha Pass, which is the mountain pass that separates the “South Park” area from the Front Range.  I do find it odd, though, that this mountain pass is at an elevation less than 100 feet higher than the elevation of the town I was just in.

Finally, the two images above that I did not take, the mountain man and the woman with the fur and gold, are credited to the site http://www.123rf.com.

1 thought on “Goin’ Down to South Park”