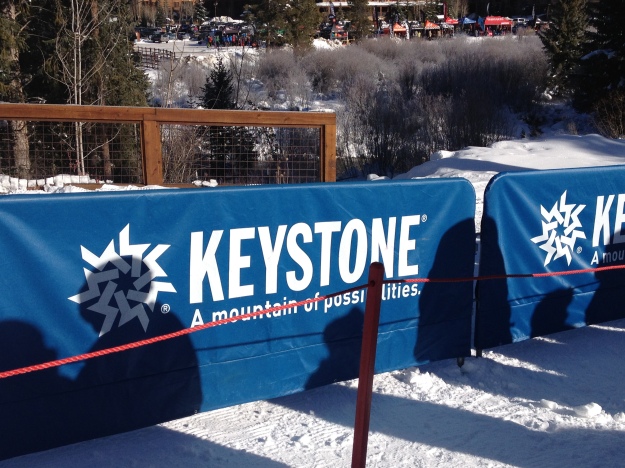 Winter is on its way!  And, unlike in many other parts of the country, here in Colorado, the arrival of winter is highly anticipated by those who love snow and snow related sports.  At the highest elevations in the mountains of Central Colorado, snow is possible at any time of year.  However, it is not until November when consistent snowpack can be expected at elevations between 8,000 and 12,000 feet, where most of the major ski resorts reside.

For those who truly love skiing or snowboarding, November often becomes somewhat of a waiting game.  This year, the snow was late to arrive in the mountains of Colorado.  The image below shows the snow pack in the Central Rocky Mountains on November 1st, 10th and 22nd (left, center, and right).  As indicated by this image, the month started with virtually no snow in the mountains, as October was quite warm.  However, a major shift in the weather pattern around Veterans day (Nov. 11) brought with it much colder weather for most of the Nation, and significant snowfalls to the Central Rockies.  The mountain snowpack in Colorado is now closer to the average for this time of year, and the ski resorts have finally been able to open up some of their trails. It wasn’t 100% my decision to begin my ski season this past Saturday.  When is comes to activities like this, decisions on when and where to go very rarely truly rest in the hands of one individual.  Functionally, the decision to ski, or take part in any kind of activity in the mountains, is always partially dependent on the schedules of all of the people involved, and partially dependent on the weather.

Saturday’s conditions at Keystone were not too terribly uncommon for early season skiing.  As previously mentioned, snowpacks are now close to the typical amounts for mid to late November.  However, more recently, the weather warmed up.  And, as is not too terribly uncommon for those who try to ski prior to Thanksgiving, temperatures were above freezing by mid-morning on all parts of the mountain, and reached well into the 40s at the base.

One of the biggest issues with skiing this early in the year is that typically not all of the trails have opened yet.  On Saturday, most of the trails on the main part of the mountain, Dercum Mountain, were open.  However, most of the rest of the mountain remained closed.  The result was that a higher volume of skiers and boarders were concentrated on the part of the resort that is open. 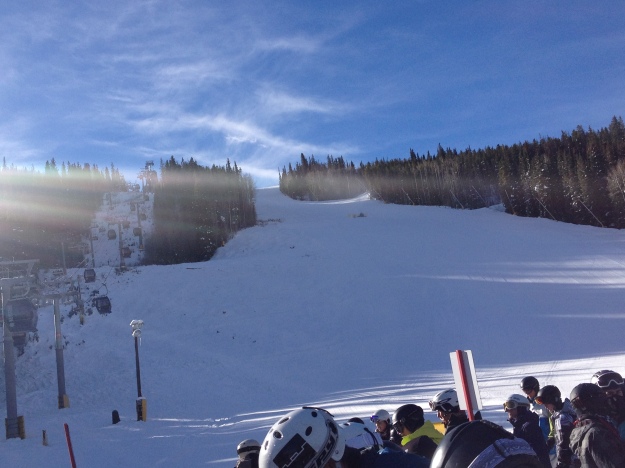 The lines for the ski lifts were quite long all day long.  At the start of the day, snow conditions were quite good.  However, they would deteriorate quite quickly.  Despite the fact that the mountain’s overall patronage was just over half what one would expect on a typical weekend day in January or February, by early afternoon much of the opened parts of the resort had become both crowded and “skied off”. 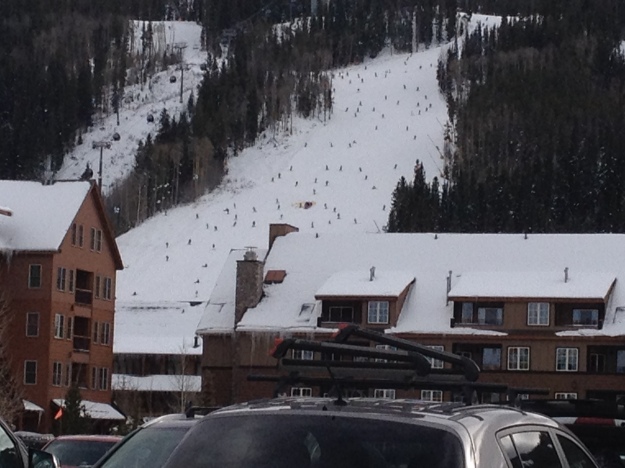 “Skied off” refers to the conditions that occur after thousands of skiers and boarders have already gone down the trail, and moved the snow around as they make their turns.  On more powdery days, the snow will often clump up at various portions of the mountain.  On a warmer day like Saturday, after this large of a volume of skiers have traversed the mountain, it is pretty common for parts of the mountain to become icy- especially in the steeper areas where more turns are being made and more snow is being pushed down the mountain.

In either circumstance, the conditions become less favorable.  In fact, there is somewhat of a divide amongst skiers in the area, with some electing to wait for more enjoyable conditions, and others still believing the trip up to the mountains to be worthwhile.

It has frequently been pointed out to me that although these conditions are far from optimal compared to what can typically be found in Colorado, many other parts of the country cannot be so choosy.  Those that have skied a significant amount in the Northeast or Mid-Atlantic will often describe a day like Saturday as a “typical day in New England”.  Some have even said that despite the iciness and crowds, these conditions are better than what they typically see in that part of the country.

In the evening, I returned to Denver to see Warren Miller’s film No Turning Back screened at the Paramount Theater.  The film featured extreme skiing and snowboarding adventures in various parts of the world.  They included incredibly steep terrain, major jumps, and tricks that are undoubtedly life threatening.  The people featured in this film were definitely amongst the craziest and most daring in the sport.  These are the skiers that would generally not be able to enjoy skiing at a resort on a day like Saturday.  Their experience and appetite mandates more; better conditions, more challenging terrain, and, much more significantly, more effort to reach their ideal venues.

I can see some parallels in some of the skiers and boarders I have encountered in Colorado.  I have heard people say that they can only truly enjoy skiing if it is a powder day.  And, others that stick to back country skiing and hike-to-terrain, both of which require a much greater effort than simply riding on the ski lift or gondola.  Maybe this just comes with experience, and improving at something.  But, although the moves seem quite bad-ass (for lack of a better way to put it), and I know that the skiing I do will never be something that warrants viewership by an audience, I can’t help but feel like the people in this film are more limited in some ways.  These extremely experienced skiers and boarders have overcome limits regarding challenge, but in turn, have new limits, as they are now limited by finding ideal conditions, and ideal locations.  These are limitations I still live without, and being able to enjoy skiing Keystone on Saturday November 22nd is a clear demonstration.