Last winter, I spent around a dozen days in Breckenridge, Colorado, including a week-long stay here in late February.  Only a 90 minute drive from Denver, I feel quite comfortable coming up here on a day trip, without spending money on lodging, on a regular basis.  To wake up, drive to Breckenridge, ski for six hours or so, and then drive back does not make for an overwhelmingly tiring day.

When traveling to a particular destination becomes as regular as this one has become for me, the lines become kind of blurred.  In a physical sense, I am most definitely traveling.  I prepare, I pack, and I get in a vehicle and go to a different location which is a non-trivial distance away.  It is not a run of the mill trip to the grocery store or a neighbor’s house.  However, there are a significant number of people who commute longer than 90 minutes each way to work every day.  For them, a trip that takes at least as long as my trip to Breckenridge (when there isn’t bad traffic), has become routine.  It is certainly not something that any of these commuters would categorize as “travel”.  A trip up to Breckenridge for me is without a doubt more interesting and exciting than a 90 minute drive to work, but it is only slightly less routine.  I know what to pack, I know what to expect, and I know where everything is.  So, a trip like this straddles some kind of middle ground between what most would consider “travel”, and what most would consider just a part of life’s routine.

However, for many, Breckenridge is most definitely a highly sought after travel destination.  In fact, according to a fairly recent Travel + Leisure article, Breckenridge is the second most visited North American ski resort, behind only Vail.  And, since the printing of that particular article, the resort has actually gotten bigger, with the opening of a whole new section of the resort- Peak 6.

Despite its size, it is actually fairly easy to get around the resort.  Each peak on the resort labelled numerically, and both the ski lifts and trails are labelled quite clearly. 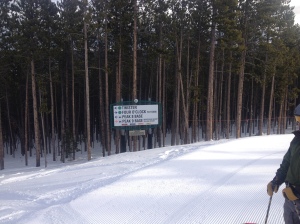 A variety of great trails, and panoramic views, already existed before the opening of Peak 6. 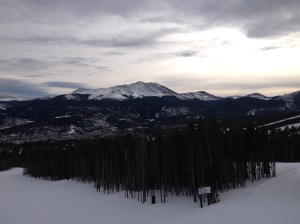 Even with Peak 6 rising to 12,300 feet, the highest point on the mountain is still the top of Imperial Express. 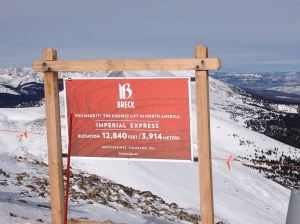 At 12,840 feet, the very top of the mountain it often gets quite windy.  In fact, this part of the resort gets closed quite frequently due to high winds, even on some perfectly sunny days.  If there are relatively strong winds at any of the other parts of the mountain, I will often have no desire to come up here, and deal with even stronger wind at this elevation.  Luckily for us, Saturday was a relatively calm day, making it an ideal time to head to this part of the mountain.  For anyone that can handle the more challenging terrain up here, I would recommend making a trip to the top of the resort at least once on a calmer day, as there are very few places where you can overlook a ski area from above as you can here.

In addition to the popular ski resort, Breckenridge is a pretty vibrant town, especially during ski season, and one that I greatly appreciate.  Main Street, which is lined with shops, restaurants, and even nightlife, is a mere two blocks from the ski resort’s main Gondola parking.  Numerous condos line the roads that offshoot from Park Avenue, providing many visitors with places to stay within walking distance of both the ski lifts and Main Street!

In addition, the town is fairly unique.  Surrounding nearly every other ski resort I have visited is a ski village that was built primarily to serve the ski resort.  These villages are typically pedestrian-only areas (usually buses can come in) that lie between the main parking lot and the ski resort.  Since these towns were built around the ski resorts, they typically have all of the amenities that anyone on a ski trip would need, often including numerous hotels and ski shops.  However, Breckenridge, having existed long before the ski resort, offers the experience of a ski town that has the layout, and feel, of a normal town.  It feels a bit less like one is visiting a resort village, and more like one is visiting a town that happens to have an incredibly popular ski resort next to it.

On the drive back Sunday, after another nearly full day of skiing, some lamented that it was time to return to “normal life”.  But, did we ever really leave our “normal lives”?  All of us involved in this trip live in Denver, and ski up in the mountains quite regularly, carrying season passes to multiple resorts.  Having skied 22 days last winter, 18 the year prior, and with the expectation of skiing nearly as frequently this winter, I feel as if last weekend, I was simply enjoying a funner part of my “normal life”.  And, this Christmas, I can be thankful that something as fun and enjoyable as skiing in Breckenridge is not a “vacation” or “travel” from which I will return from, but a part of the cadence that represents my “normal life” in its’ current state.