It is hard for me to really describe a place like Glendo Reservoir in East Central Wyoming.  It feels like this place is a complete contradiction of itself.    It is in Wyoming, a mountainous State with the second highest mean elevation in the country, at 6700 feet.  Yet, this reservoir sits at a paltry 4635 feet, lower than many of the larger cities of the Rocky Mountain region.  Unlike many of the other popular destinations in Wyoming, no mountains can be seen from here.

In fact, like many lakes here in the West, this particular lake is a Reservoir, meaning it is manmade and does not naturally exist.  Glendo’s average annual precipitation is roughly 14 inches per year, which is about what one can expect anywhere on the high plains just East of the Rocky Mountains.  Lakes like this one, and the even higher profile Lake McConaughy in Western Nebraska, exist only because of hydrological dams created in the 20th Century.  To anyone not thinking about the creation of these dams and the reason for them, lakes like these appear completely out of place for a section of the country that is quite dry.  The pioneers who followed the famed Oregon Trail during the westward expansion period of the 19th Century followed this very river westward through what is now Nebraska and Eastern Wyoming.  They would have seen none of these manmade lakes that now serve as popular weekend destinations for boating and fishing enthusiasts with few other places in the region to go.

In a way, this place does not even feel like it is in Wyoming at all.  When most of us think of Wyoming, or any other Rocky Mountain State, we think of destinations that are either in the mountains, or within view of the mountains.  Most Americans understand that there is much flatter terrain in the Eastern portions of Colorado, Montana, New Mexico and Wyoming.  However, these places are dry grasslands with abundant cattle ranches and oil fields, not the kind of place one would think to bring a boat, jet skis, kayaks, and fishing poles. 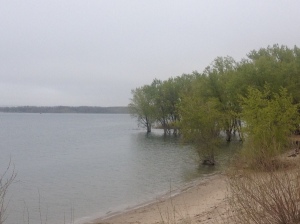 Camping at Glendo Reservoir is already a bizarre experience.  Making the experience even more bizarre was the bizarre weather.  May had already been quite wet, with rainfall totals prior to Memorial Day Weekend more than double the monthly average for nearly all of Colorado, as well as the Southern half of Wyoming.  As a result, Glendo Reservoir was roughly 94% full prior to the weekend.  All over the lake, images like these were common, with trees that typically stand on dry land temporarily underwater.  The air was far more humid, and the skies were far more cloudy than is typically the case in Eastern Wyoming. 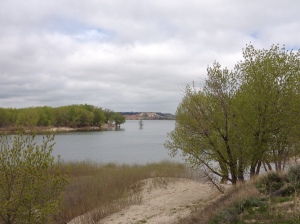 The cool, damp overcast weather reminded me of the Midwest as a whole, as the entire region is prone to be damp and cloudy at times.  The size of the lake, however, reminded me specifically of Wisconsin, where I would frequently spend weekends on lakes roughly this size.  Bringing boats up to the lake on summer weekends is a major part of the culture there.  And, the sand dunes and trails that surrounded the lake reminded me of some of the dunes I would typically encounter on the Lake Michigan shoreline in Indiana and Michigan.  At times, it felt impossible to even remember that I was actually in Wyoming, and not in the Midwest.

After a fairly cold night of camping, we were able to have some fun on Saturday.  After a damp, foggy start, the skies gradually cleared throughout the morning hours, and temperatures reached comfortable levels.  During this time period, we were able to do some hiking on the sandy trails around the lake, hang out at the beach (another concept that seems foreign to the state of Wyoming), and even do some kayaking.  The water was quite cold, as the Lake is fed from the North Platte River whose origins are pretty high in elevation.

The rain did not start up again until 4 P.M., which was later than some forecasts had indicated.  Unfortunately, however, once the rain started, it came down quite heavy.  In fact, it actually ended up cutting the trip short, as, well, camping in the rain can be a less than enjoyable experience at times.  However, it was not the rainfall that pounded us in the afternoon and early evening hours that made me decide to leave Glendo behind on Saturday.  It was the expectation that the rain would continue throughout most of the day on Sunday that pushed me to leave, as enduring the evening of cold, wet weather huddled inside a tent would not produce a reward.  Those who decided to press on with the trip and stay at the campground confirmed that the rain was still falling Sunday morning.

I could be disappointed in only getting one day at the lake this weekend.  But, unfortunately, that is part of the reality of taking part in outdoor activities as a whole.  People can make all the plans they want, but, in the end, Mother Nature really does not give a shit about whatever plans have been made.  The Earth, the sun, the air, and wildlife move about in a manner that we cannot truly control.  The best thing we can do is be prepared for it, both in the sense of remaining safe in adverse conditions, and in a way that allows us to use our most precious resource of all, our time, in a more optimal manner.

Thus, I decided to head back to Denver (home), where prospects for Monday, the final day of Memorial Day weekend, appeared better.  The decision proved to be the right one, as Monday morning was pleasant, and it did not rain until after 4 P.M.  I was able to get a solid bike ride in well before the onset of rain. 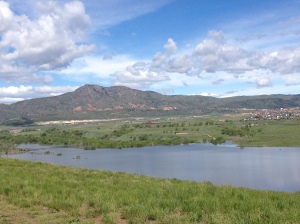 Life is full of unexpected experiences.  Nobody expects it to rain nearly every day in this part of the country, creating lakes where they typically don’t exist.  I did not expect to encounter a lake in the middle of nowhere in Eastern Wyoming or Western Nebraska.  And, people are often surprised that some of the people they meet like certain food, or genres of music that do not match their upbringing.  But, these anomalous experiences do happen, and happen quite frequently.  When we make expectations in life, we need to account for, and prepare for, uncertainty.