What does a dog lover do when they suddenly find themselves dogless?  Well, they gladly accept the opportunity to “dog-sit” for their friends when they leave town. 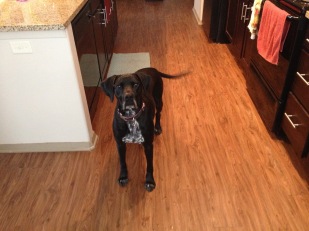 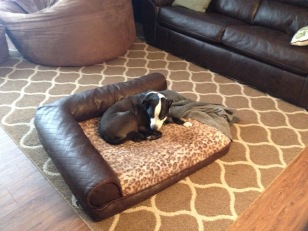 Those that have lost a pet before know the situation.  It is just too soon to get a new dog.  But, I had become accustomed to spending time with dogs.  It still feels sort of strange to come home and not see my dog waiting for me at the door.  So, sometimes the best thing to do at this point, while I am missing just hanging out with dogs, is to go somewhere and spend several days with someone else’s dogs. 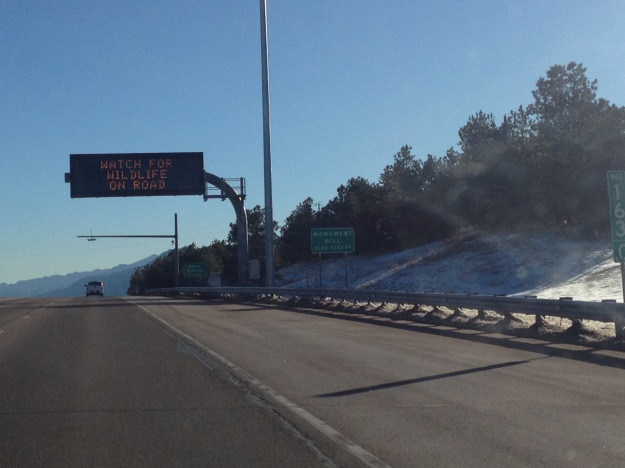 The first time I drove over what is referred to as the “Palmer Divide” it kind of caught me by surprise.  It was my first time driving from Denver to Colorado Springs.  As one who loves looking at maps, I knew there was a ridge between the two towns, and I knew it was referred to as the Palmer Divide.  I was, however, caught by surprise by how high in elevation I got to just simply driving along Interstate 25.  7,352 feet is over 2,000 feet higher in elevation than Denver, and around the same elevation as Lookout Mountain, a place people can go and overlook the City.  It’s way higher than I thought one could go without actually going into the mountains.

A most general simplification of Colorado’s geography slices the state into thirds.  The eastern third is essentially part of a larger region that extends nearly 1000 miles east called the “Great Plains”.  The central third is the Central Rockies, and the western third is often referred to as the “Western Slope”.  In this extremely simplistic model, Monument would technically be part of the eastern third, but it’s high elevation makes it significantly different than most other places referred to as part of the Great Plains. 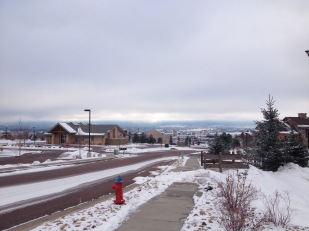 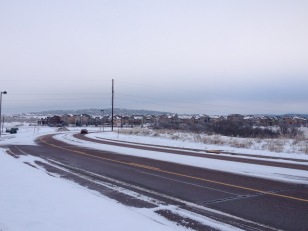 In some ways, this town has the same look and feel of any fairly recently built suburb.  Although the town was incorporated in 1879, most of it’s population arrived since 1990.  Unlike in urban areas, the roads wind, and subdivisions are all disconnected from one another.

I actually spent the later half of my childhood (7th-12th grade) in a suburb with a similar layout.  My parents house (in which they still live) was in subdivision built during the 1980s.  The area is somewhat more densely populated than this, but the experience was actually quite similar.  Most suburban subdivisions are across the street from some sort of strip-mall.  At my parents house, we happened to be only four houses in from the main road, making the shops across the street quite close.

Over the course of that six year period, I had actually become quite accustomed to an experience that would be considered strange to most people.  Given how close all those shops were to home (the grocery store we always went to was less than a quarter of a mile from home), it seemed strange to me not to just walk there, as opposed to driving.  However, as anyone who has spent a significant amount of time in suburban areas built  in the later part of the 20th Century would attest to, these areas are quite car-centric.  For a lot of people who live in these areas, it doesn’t even cross their minds to walk somewhere.  Therefore, I would quite commonly be the only person walking anywhere in a place not built with pedestrians in mind.  This is an experience I had become accustomed to, but would likely seem strange to most people. 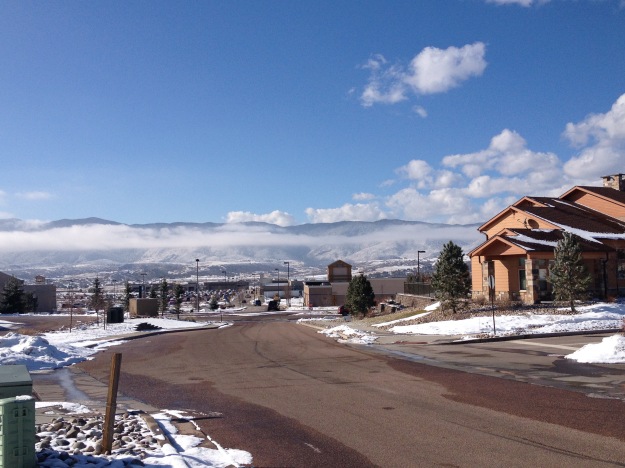 The apartment complex I stayed at in Monument Valley is across the street from a fairly major shopping center, which includes Wal-Mart, the Home Depot, and several restaurants.  Theoretically, one could live in a place like that, and, other than whatever commute they have to work, be able to satisfy all the basic needs of life without having to drive anywhere.

As the weekend progressed, I walked back and forth across the street to shops and restaurants, the same way I did all those years ago.  I kept thinking to myself about what life is like for people in a place like this.  Obviously, most people don’t walk, even if they are just going across the street, but if I lived here, I most certainly would.  But, if I lived here, I wonder if I would get bored.  Being so close to the mountains (closer than Denver), there were some interesting cloud formations that I would see on a regular basis.  But, as much as I love the weather, and was blown away by this long flat cloud in front of the mountain range, that would not entertain me for an entire day.

For nearly all of my life I have been judging certain areas, where there aren’t any interesting bars, restaurants, or other fun places, as boring.  In fact, one of the strangest things about the Denver, is that there are sections, within the city limits, that do not have anything within walking distance.  When I saw these neighborhoods, I decided I would not want to live there.

But, I really thought long and hard about life in a town like this.  Would there theoretically be a way to make it work?  I mean, I know that I would miss a lot of urban entities, and taking Ubers, busses, trains, etc. to get around.  But, obviously a significant subset of the population does just fine in places like this.  They just do something else.  Maybe they go out to the park instead of going to a fancy brunch, or they have house parties instead of going to the bars.  I would definitely still prefer to live in areas with interesting entities around me, but I maybe I should not be as reliant on places within the neighborhood for entertainment.  After all, it does get expensive.  If experiencing life in a place like this for a few days can teach me anything, it is that sometimes we need to be creative and figure out something amazing to do with our time on our own, using limited resource.