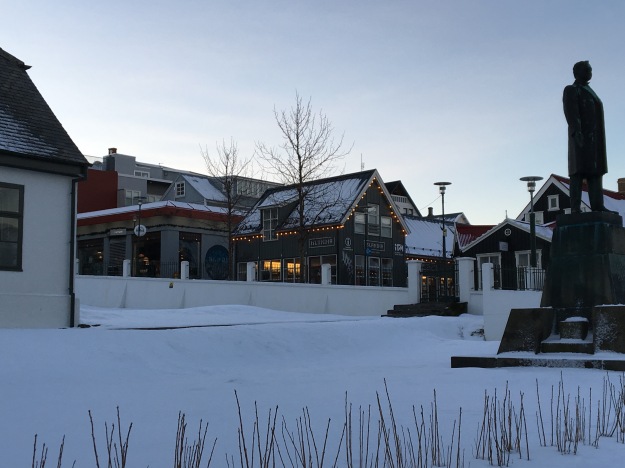 It’s 8 AM on a Thursday morning in Reykjavik, Iceland’s Capitol and largest City.  The sun has yet to come up, as this far north (64 degrees latitude) days are still quite short in the middle part of February.  A quiet dawn persists over the town for nearly two hours, from 8 to about 10.  A couple of local teenagers are hanging outside the grocery store.  A group of tourists can be seen hanging outside one of the few restaurants that are open.  Otherwise, the streets are quite empty, and the shops are mostly closed. 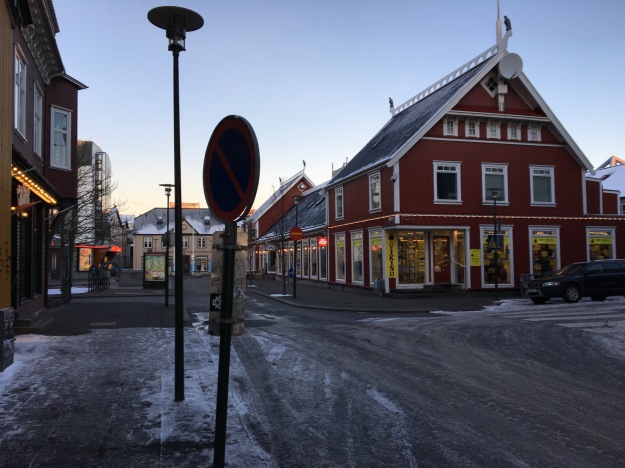 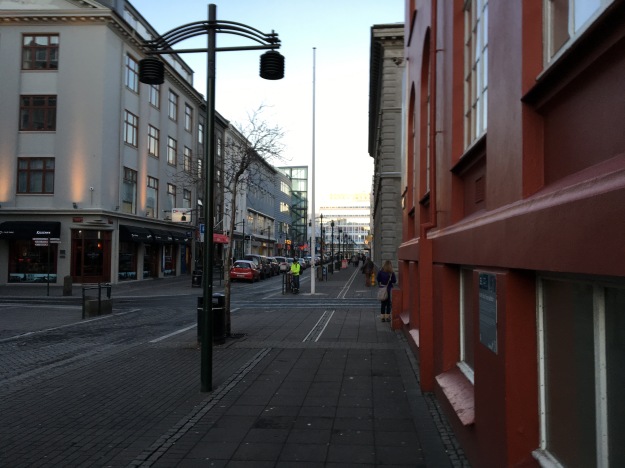 It’s odd because, in many most major cities, 8:00 is the peak of what is often referred to as “rush hour”.  It is a time of people hurrying to and from train stations, and crowding highways trying to get to work.  Even in the more touristy sections of cities, which this most certainly is, a lot of motion can still be found at this hour.  At places like Chicago’s Michigan Avenue, and New York’s Time Square, which are utterly packed with tourists nearly every day, there are still plenty of people to be found at 8:00 on a weekday morning, mostly people headed into work.  Here, that culture just does not seem to exist.  Are all the office jobs elsewhere?  Do people have office jobs?  Do they work different hours?  Or is the economy so heavy on tourism and fishing that there is just no point in being awake at an hour when all the tourists are likely still asleep and the sun is not out? 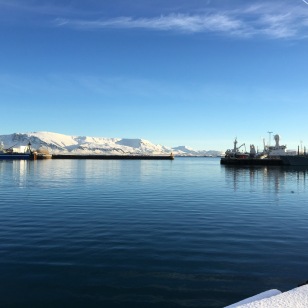 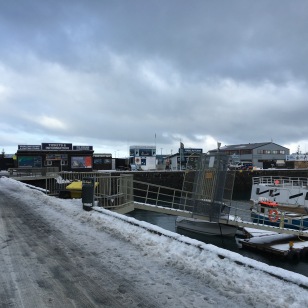 By noon, things start to pick up.  On some days, the sun comes out and hits the harbor.  At this latitude, when it hits the harbor, it hits it in a way that seems to highlight every single feature, from the boats in the harbor to the snowy mountains on the other side.  From the perspective of someone that has always lived in the mid-latitudes, is feels neither like mid-day nor twilight.  It is a different feeling altogether, and those who take a pause from their tourist itinerary and truly soak up the moment are reminded as to why it is worthwhile to visit different places in the first place; to see something, experience something, do something that cannot be done at home. 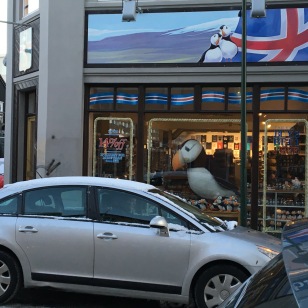 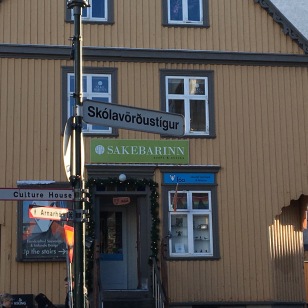 The day progresses.  Tourists fill streets whose names are too intimidating to even try to pronounce, make their way into the bars, the restaurants, and the dozens of souvenir stores that feature a gigantic stuffed puffin in the window.

The weather inevitably changes- but, well it doesn’t. 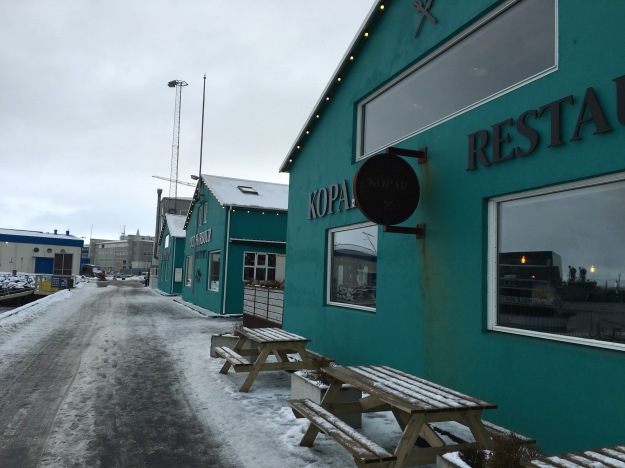 There is this saying, “if you don’t like the weather, wait 5 minutes, it will change.”  Anyone that travels on a regular basis to places outside the tropics has most likely heard the phrase too many times to count.  It is used here.  At souvenir shops, mugs and shirts about Iceland sport the phrase.  And, it is true to some extent.  At any moment, it can turn from sunny to cloudy, or suddenly get windy.  But, the temperature does not vary too much.  On a four day trip to Iceland, the temperature, including daytime and nighttime, seemed to only vary between a few degrees below freezing and a few degrees above freezing.

Regardless of these changes, winter in Iceland is consistently cold and damp.  For this reason, one of the most popular items made in all of Iceland are wool sweaters.  While any visitor to Reykjavik can find these sweaters for sale all over town, the best deals on them are found at the Kolaportid Flea Market.  Even at the Flea Market, though, they can be quite expensive, the equivalent of roughly $100.  Money talks, and it is easy to figure out what a certain culture values by seeing what they are willing to spend money on.  Coloradans are willing to spend thousands of dollars annually on ski equipment.  Icelanders are willing to spend money on a warm wool sweater. 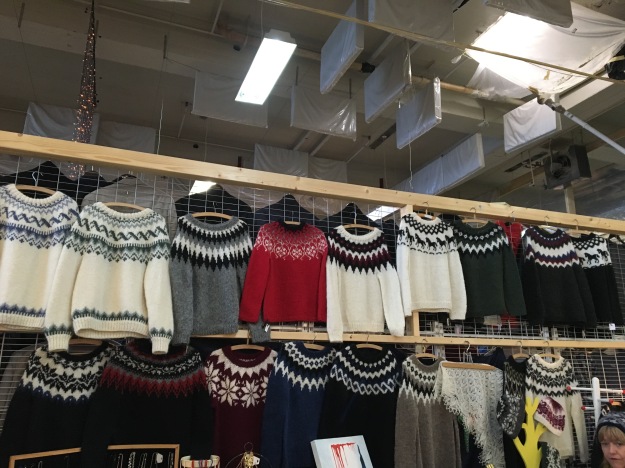 Reykjavik’s population is only just over 200,000 people.  In fact, the population of all of Iceland is 330,000- significantly less than every borough of New York City, even Staten Island.  Yet, it is a place that knows how to party!  The nightlife is surprisingly good- probably better than many towns 2-3 times its size! 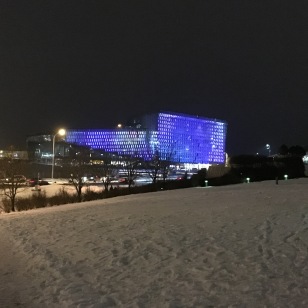 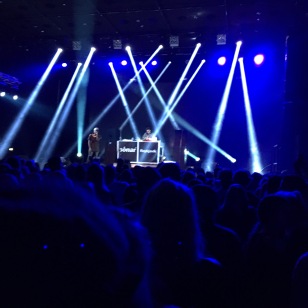 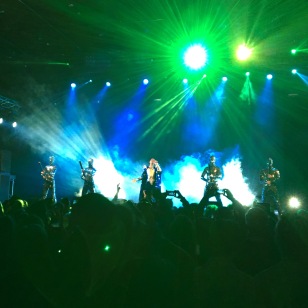 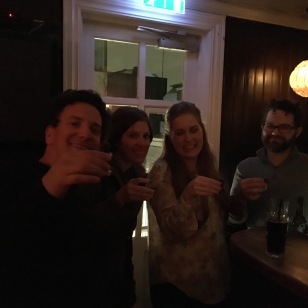 Making up for the lack of action at 9 in the morning, festivals, shows, and clubs give locals and tourists alike plenty to do in the nighttime hours.  Iceland has been promoting tourism quite hard since the economic collapse of 2008, which hit Iceland particularly hard.  Iceland Air has been particularly active in promoting tourism, by adding direct flights to more places in both Europe and North America, possibly with the goal of becoming a preferred airport for making connections while traveling between Europe and North America. 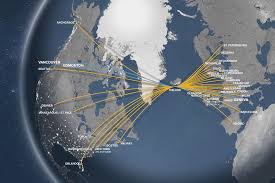 Looking at this map, it is hard not to imagine an executive with Iceland Air looking at at map, possibly even Risk the board game, and thinking of this grand plan to become a connecting point between the continents.

Well, it’s working.  Recently, more people talk about Reykjavik being their favorite place to make flight connections, and more and more people seem to have visited Iceland.  At this point, in Reykjavik, it is probably impossible for locals and tourists not to interact with one another in some way, especially at clubs and shows.

After hours of partying, all of a sudden it is 4 AM.  Many clubs still have lines to get in!

At 5 AM, on the streets, music can still be heard coming from multiple directions.  In fact, by this hour, it almost becomes easier to find a place to eat than it was at 9 AM on Thursday morning.

Sometime in the next few hours, the blurry memory of a fun filled night fades into the next morning, likely to be delayed through at least part of that lengthy twilight period.  In my particular case, it faded into the realization that it is now noon, and Millions of New Yorkers (where the local time is 7 A.M.), despite the time difference, have woken up before me on the other side of the Atlantic! 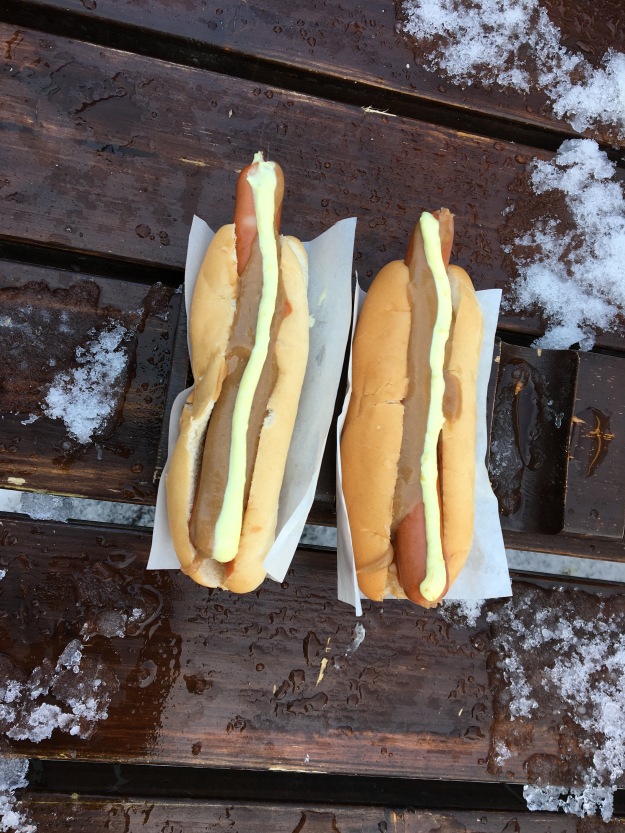 I only spent four days in Iceland.  I do not know the full extent of life in this nearly arctic city of Reykjavik.  I only know what I experience in this short period of time, where I did the best I could to experience the local culture.  Regardless, it does appear quite different from any place I have ever been.

1 thought on “Life in a Northern Town”