Some events in life are clear.  They can be clearly labeled a success or a failure.  The reason for the success or failure is clear, and there is a clear lesson to be learned from it.  One comes out of an event of this nature much like an idealized application of the scientific method.  A piece of new information is obtained.  It either strengthens a pre-existing theory or calls it into question.

In the real world is not ideal like that.  Many observations, an many of our life experiences do not even produce a clear cut data point, a clear “success” or “failure”, or a clear lesson to be learned.  This was certainly the case on my first storm chase of the 2016 severe storm season, on Saturday, May 7th.

It was a day that did not require me to travel far to chase.  In fact, I returned home to Denver less than eight hours after departure, something that cannot typically be expected.  If I lived in a City right in the heart of “tornado alley”, such as Oklahoma City, Topeka, or Lincoln, I would expect to be able to regularly see great storms without having to allocate an entire day.  However, Denver is a bit West of the region most prone to severe thunderstorms, much the same way Chicago is a bit East of that region.  When I moved to Denver, I did have to make some adjustment with regards to storm chasing, but I did not significantly alter my expectations regarding time spent or distance traveled on a typical one-day storm chase.

Saturday’s severe storm setup provided me with a somewhat familiar dilemma, and one that is even more common chasing storms in Colorado, where many thunderstorms are initiated by orographic features.  Severe storms need a certain environment to thrive, one that is warm an moist, but also with some kind of boundary to create low-level wind sheer, which creates the rotation necessary for supercells, and tornadoes, to form.

Saturday was not that kind of day in the Denver metropolitan area. The Denver area spent the entire day in a thick field of low level cloudiness that prevented the air from warming up.  The high temperature at Denver International Airport was only 53.  Ideal conditions were farther East.  That day the high in Fort Morgan, close to where a lot of the violent storms would hit, was 68.  As is the case with any storm chase, it is important to get into an area where the environment will be favorable for storm development.  So we drove East of the cloud deck.

But then it happened, forced by the Palmer Divide, thunderstorms formed just to the North and East of Colorado Springs, in an area where conditions were not favorable for severe storms.  Sitting in Byers, roughly 40 miles East of Denver, we had a choice; do we go South and West to catch the storm now, or do we hang back and wait for the storm to reach our current location, in a more favorable environment?

Staying back means potentially missing what the storm does in its early phases.  However, being more aggressive means possibly missing a different storm, that may form in an area with better conditions for severe storms.  On Saturday, after some deliberation, we decided to go after the first storm.  We felt cold air, possibly the coldest I have ever been in while observing a thunderstorm, and saw a strong downdraft.  This is consistent with an atmosphere that is cooler and drier than the ideal one for producing severe weather. 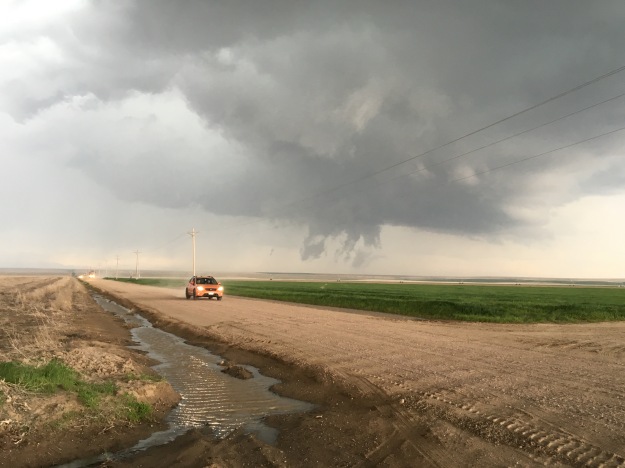 The storm raced northward.  We ended up being a little bit limited by the relatively sparse road network in Northeastern Colorado, having to follow the storm along a series of dirt roads that connected Strasburg, CO (along I-70), to Wiggins, CO (which is along I-76). 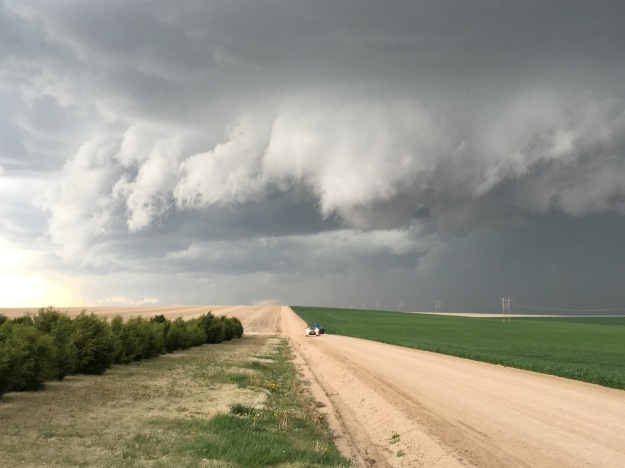 In fact, there was even a time when we were pretty much directly under where the RADAR echoes showed the center of circulation to be.  This situation sort of made me nervous.  At the time I was thinking that if a tornado were to form, it might form quite close to my current location.

For roughly an hour, it seemed like the storm was kind of teasing us.  One minute, these clouds would appear to be lowering and rotating, as if a tornado were ready to form, the next minute it would all just simply disappear. 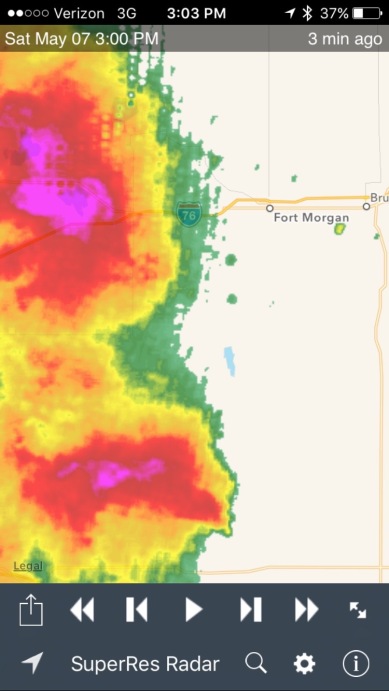 It was around this time that the storm reached I-76 near Wiggings.  Here, the storm interacted with a previously existing boundary, and, according to sources, went tornadic.  However, we were never able to observe the tornado.

After this, the storm transitioned, as many severe storm clusters often do, into a large bow echo. 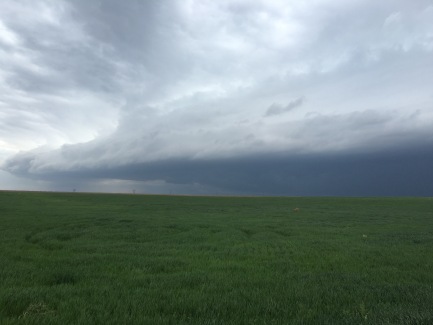 This is a clear indicator that the storm is entering a different phase, often associated with decay.  It has become dominated by downdrafts.  The most likely result is severe straight line winds.  At this point in time, the best thing to do is simply observe this gigantic thunderstorm, as despite no longer having the low-level rotation necessary for tornado formation, it is quite breathtaking in its own way.

Storm chasing, and storm observation is about more than just tornadoes, and it is quite unfair to describe all chases that do not result in viewing a tornado as a “failure”.  We really could not have picked a better place.  There was only one other cluster of storms that day that produced numerous severe storm reports.  That one formed farther East, a bit later, and produced tornadoes when it interacted with the same East-West oriented boundary.  We also still observed some interesting severe convective storms.

But still, it is frustrating to know that there was indeed a tornado, verified, within ten miles of where I was sitting, and I somehow did not get to actually see it.

I know being in position to view this storm was quite challenging, and it is likely that few chasers found themselves in such position to view the tornado.  But I wonder, had my group reached the I-76 corridor 15-20 minutes earlier, would we have been in the right position to see it?  We knew this boundary was there, and it was in the area with the most ideal conditions.  Was going after the storm initially an exercise in impatience?

The day ended with a return trip, along I-76, back to Denver, through the area that was clearly just recently pelted with hail.  I returned knowing that there are aspects of this chase that can be considered a “success”, but others that can be considered a “failure”.  I also returned still wondering how to strike that proper balance between aggressively chasing after storms that initiate, and patiently waiting for storms to form or reach the location where the conditions appear to be most favorable.