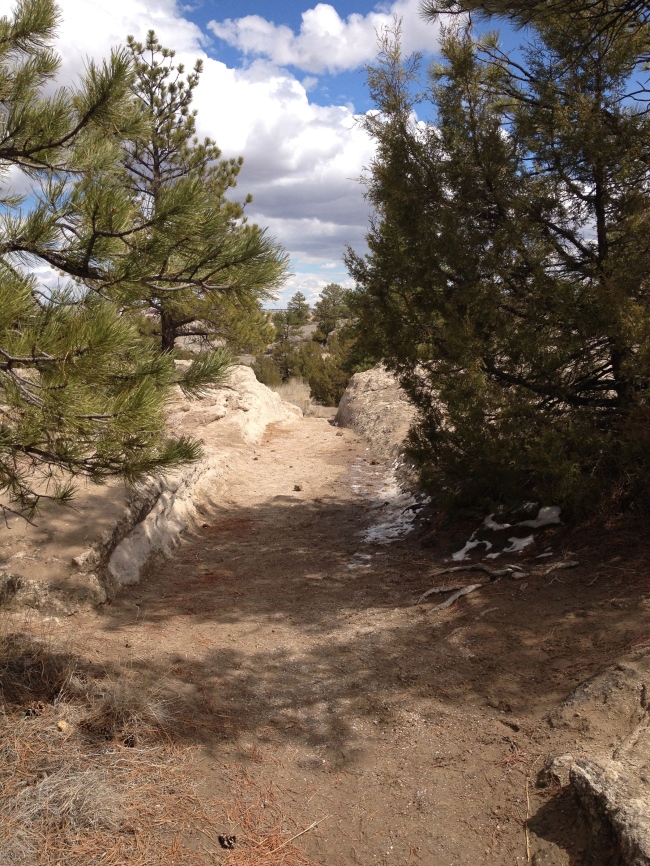 I am not on vacation, nor am I on any kind of a long trip.  I have a couple of more major trips planned in the near future, and I intend to write about them.  Today, I took a day trip up to Fort Laramie and Guernsey, Wyoming to see some historical sites related to the Oregon Trail.  For those who don’t know of the Oregon trail, and have not played the popular 1990s computer game, the Oregon trail is one of several trails commonly taken during the 1800s era of Westward expansion.  As the name suggests, this trail was the route to Oregon.  It originated in Saint Louis, Missouri, which was a common starting point for many westward voyages.  Thus, the Gateway Arch and museum was built in Saint Louis to commemorate the city’s role in Westward expansion.

Several historic trails actually followed the North Platte River from it’s split in North Platte, NE to just west of Casper, WY.  Not only did the Oregon trail follow this route, but so did the California trail (which, as the name suggests went to California rather than Oregon), and the Mormon-Pioneer trail, which was used to establish Utah as the base area for the Mormon population.  These trails break off in different directions farther West, but in order to take advantage of the most efficient pass through the Mountains, they all followed this route, passing through Fort Laramie and Guernsey in Eastern Wyoming along the way.

The main attraction to this particular site is the ability to see the wagon ruts quite clearly, as shown in the picture above.  The wagon ruts are so clear to this day because in this section of the trail, the wagons passed through rock as opposed to dirt.  So, the process of weathering over the past 100+ years did not remove the evidence of heavy wagon traffic here, the way it did in many other points along the trail.

Fort Laramie also had major historic significance.  It was a major stopping point for pioneers making the Westward voyage, providing them with a place to rest, and a trading post for them to obtain supplies for their journey, which was about to enter a more treacherous phase, going through the mountains.  It is, in fact, at this point along the journey, where those traveling West first start to see the Mountains in front of them.  Up until this point, the trek from Saint Louis, along the Missouri, Platte, an North Platte rivers mainly through Missouri and Nebraska is relatively easy compared to what lies ahead.  I can even picture some people making this journey to have put the upcoming challenge that these Mountains pose out of their mind, after a month or so of mostly flat terrain.  While looking Westward from the Fort, I tried to imagine what would be going through the mind of someone traveling the trail in the mid to late 1800s, suddenly being reminded that their voyage was about to get much trickier, and much more dangerous.

It is always interesting how history seems to come alive in places like this.  I know not everyone does this, but whenever I visit historic places like this, I always kind of imagine the actual historic scene that is being commemorated.  In this case, it is Westward expansion, the movement of people from the East across a relatively unknown vast expanse of land, to a whole new life in the West.  I imagine the people at the Fort, discussing their voyage up to this point, and what lied ahead.  Maybe even some of them had a few drinks and had long talks about what they expect from their new lives, in Oregon, California, Utah, or wherever else they may be going.

The first time I ever remember imagining history was on a family trip to Plymouth Rock when I was eight years old.  On this trip, not only did we visit the rock where the Mayflower landed (I was disappointed, I thought it would be bigger), but we also went to Boston Harbor, where the Boston Tea Party had actually taken place.  They even had a ship with mock boxes of tea, so tourists could actually lift these boxes and act as if they were dumping the tea into the sea, the way the colonists did in 1773.

It is when I thought of this experience, and how it taught me to visualize history that I suddenly made the connection between these two places.  The Mayflower is basically where history began (from our perspective) for the state of Massachusetts.  The story of everything in that part of the world begins with the Mayflower’s arrival, then to Thanksgiving, and onward to the revolution, etc.  Where I live now, in the West, history begins much later,  pretty much with this very trail.

The first people to use this trail were actually fur traders, as early as the 1790s.  They made no permanent settlement in the area, but they did “blaze the trail”.  They were the ones that figured out what path was best to take through the Mountains, followed the rivers trapping beaver and such.  In essence, they mapped the route for the settlers that would begin making that voyage several decades later.  Along this trail would be the first white settlement in the region the same way the Mayflower was for the Northeast.  It is truly amazing what kind of connections we can make when we let our thoughts flow like this.

The other major historical significance was Fort Laramie’s military presence.  This is an aspect of our history that is significantly less triumphant and more questionable than the voyages across the country.  When I think of the pioneers, I think of them with pride, as they risked their lives to settle new areas and open up new opportunities to us all.  However, the military presence has a much more morally questionable history.  The military base at Fort Laramie played a role in a ridiculous shoot out with a group of natives over the theft of a cow, as well as some of the “Indian wars”, which, it appears from the way the history was presented there, came about when us, the European settlers, violated a treaty with the native tribes that we had previously made.  The previous treaty had given the native tribes the black hills, but once gold was discovered there, we decided we wanted it.

History is never as clear as we would like it to be.  Everyone loves to study World War 2 and the battle against the Nazis because it presents us as the “good guys” in a manner that is about as clear as any historical event would ever be.  Almost every other event has many shades of gray, and much more complexity to consider.  It is often presented through a biased lenz, but I have found out through further investigation that there is quite frequently more to the picture that what is commonly presented in history class, the media, or any other common discussion.

This bias, of course, is no more evident than my own thoughts earlier in this blog about how Massachusetts “history” started in 1620, while Wyoming “history” started with the first fur traders in the 1790s.  Both those places had been occupied by native tribes prior to those dates, which represents the first time European settlers entered the picture.  They may have a rich history as well, with stories of conflict, adversity, triumph, courage, and even some questionable actions, much like our own story of these places over the past few centuries.  But, I don’t know the story.  Maybe it’s been forgotten, maybe someone still knows it, but the rest of us Americans of European descent just don’t care.  Heck, I find that many people don’t even care about the history our direct descendants were directly involved with, let alone a history of our land that has basically been erased over the past few centuries.

I’ll probably never know that story, and there are probably many aspect of the story of the settlers of the 1800s that I am not aware of.  But, going to places like this does give some perspective, and encourages many of us to think about our history; the good, the bad, and the questionable.  History is not something that can be changed, but learning it gives us all a little bit of perspective.  As Bob Marley put it “if you know your history, then you’ll know where you’re coming from”.