In this entry, I introduce another form of travel, bicycle travel. Bicycle travel is simply traveling by bicycle, but there are probably many people in the United States that have never even thought of the idea of traveling somewhere by bicycle.  It is definitely more common in Europe, but there are a significant number of people that do bicycle tours in the United States.  Groups like the Adventure Cycling Association run tours that vary from just a few days to several months.  The several month tours go across the entire country.  I don’t know who has the time and money to do this, but I sure wish I did!

My one day ride that clocked at just under fifty miles can hardly be considered a bike tour, given that these groups typically ride sixty or more miles a day.  However, today’s bike ride was with a specific exploratory mission, so I count it as “traveling” by bike (as opposed to just riding a trail or running errands).  I had desired to find out where the Colorado Trail began, which is twenty or so miles to the Southwest of Denver.  This trail, which conjures up images (at least in my mind) of the more well-known Appalachian Trail, runs about 485 miles, stretching from just Southwest of Denver all the way to Durango!  You can’t bike all of the trail, and most of the biking parts are primarily for mountain biking, but I did have in my mind the idea of being able to bike straight from home to Durango based on routes provided by the Adventure Cycling Association.

My ride today started as many of my rides do, down the Platte River trail.  Luckily for me, the Denver Metro area has a bunch of great bike trails, most of which follow rivers and creeks.  The Platte River trail runs along the river, passing right through the heart of the city.  It is one of the main trails of the Denver metro area, and I can take this trail South, for a good part of the way, all the way to C-470. 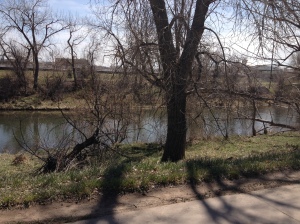 On the way I took this photo of the South Platte River to demonstrate that water levels along the river are looking healthy.  Last year, as well as earlier this year, severe drought conditions lead to much lower river flows.  Hopefully this return to near normal will mean less wildfires than last year.

As I pass through the Denver City limits into Arapahoe County, the trail changes name to the Mary Carter Greenway.  In Arapahoe County I also notice two peculiar things.  There is a posted speed limit of 15 miles per hour.  In fact, this speed limit is posted quite frequently, a few times per mile.  I blatantly disobey.  I have become quite accustomed to exceeding posted speed limits while traveling by car, I did live in Chicago for a long time.  However, the 15 mph speed limit on this bike trail gave me the opportunity to disobey speed limits in a completely different venue- on my bike.  I felt great!  There are also round-abouts (also known as traffic circles) on this trail.  A lot of smaller trails branch off of this trail.  For some reason Arapahoe County decided that bicycle traffic circles are the best way to control the flow of traffic at these particular junctions.

After getting across highway 470, I must pass through the Chattfield Reservoir.  This is State Park, and where some climbing enters the picture.  Trails the follow rivers are generally quite flat, with only gradual rises and falls in elevation.   At this reservoir, I climb what feels like 300 feet in elevation over a fairly short distance.  Bicycling uphill is significantly harder than bicycling on flat ground.  Having spent several years in flat Illinois, I am not accustomed to bicycling uphill, so I need to practice, and I welcome the challenge.  The great thing about climbing these little hills in the Denver metro area is the view of the mountains you get at the top.  You are still a significant distance away from the mountains, but see them from a higher vantage point.  The photograph below is from the top of the hill, looking out over the resevour towards the foothills of the Rocky Mountains, quite a splendid view.  I took a little bit of time off here to soak this in. 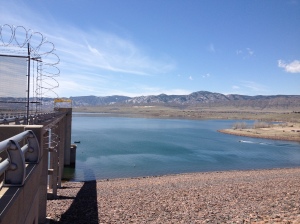 Sometimes after a triumphant hill climb, when I go back down the hill, I feel sad.  I feel almost as if I am just giving up what I had worked so hard to achieve- elevation.  It was especially hard to go downhill knowing that on the return trip I was going to have to re-climb up that very same hill.  However, I definitely need to work on my climbing.

To get to the starting point of the Colorado trail, I must exit the park and take Wadsworth Rd. south for about three miles.  Cycling along Wadsworth Rd. in this segment is the closest thing to cycling on an interstate highway I have ever experienced.  In this segment (south of C-470), the road is 55 miles per hour with a wide shoulder.  The shoulder is wide enough that I am not at all scared of being side-swiped by a fast moving car, but it still is kind of a different experience for me, given that I usually bike in cities or on trails.  The road abruptly ends at a Lockheed Martin facility.  This I find even more odd, as my DeLorme High Resolution Colorado atlas had clearly pointed to this location as the start of the Colorado trail.  After stopping to look at the map on my phone and stopping at a sign, I finally find it, the beginning of the Colorado trail.

As I gazed out at the Colorado trail, I obviously thought about the 485 mile path leading all the way to Durango.  If I were to bike the amount I biked today, it would take me ten days to complete the trail, and the conditions on the trail are much tougher than the paved roads I biked on all day.  Despite this, I still get some kind of a kick out of the idea that I am looking at a trail that leads all the way to the opposite end of the State.  But, I also cannot help but think about how this trail starts at a Lockheed Martin facility.  I mean, it’s a non-motorized trail, mostly geared towards hiking.  Regardless of how anyone feels about issues of war and national defense, defense contractors should be one of the last things that comes to anyone’s mind while thinking about trails like the Colorado Trail or the Appalachian Trail.  They even sponsor this Discovery Pavilion, which is at the end of the Waterton Canyon trail, which makes up segment 1 of 28 of the Colorado trail.

The return trip was not too eventful, except that the wind shifted out of the Northeast to ensure that I had to bike into the wind both ways.  Although, with sustained wind speeds not exceeding 10 mph, there really isn’t too much to complain about.  It made it that much harder, but, if I want to ever do bike tours like the ones at the Adventure Cycling Association, I do need to be prepared to handle wind and hills, so I am glad I am getting that experience even if my 46.5 mile ride today was harder than a 60 mile ride in Illinois would be.