Earlier this week, when I was camping in some remote areas (as in, no WiFi), I fell behind on my blog posts. This is the main reason why today, for the second day in a row, three new entries are posted up on this blog. At the end of every day, I had been writing down my thoughts, but had not been able to upload the pictures into this site. Last night, I had a hotel room, and was able to load up my pictures. This weekend, I will be in the hotel world as well. So, with this entry, I will officially be caught up on my entires. On the return trip to Denver, I will most likely re-enter the camping world.

One way I have been amazing myself on this entire trip has been how consistently I have been waking up without provocation. Starting with Saturday morning, every morning I have been waking up at more or less 6 A.M., and not really having any problems. This is a far cry from when I was waking up to a desk job I did not enjoy every morning, and having to force myself out of bed every day, and struggling to be up at 7:00, or even 7:30. I thought this may have been an artifact of being outside camping, but, this morning, at the fabulous Super 8 in Hardin, I awoke at 5:45 with no problems.

Today’s journey was a nearly 400 mile journey across the state of Montana to get to Missoula for my Leadership Training. To be honest, I was somewhat concerned that I would get bored on this drive due to the large spacing between towns, and how traveling on only interstate highways get. But, this was not the case at all. In fact, I ended up finding a lot of Montana to be a pleasant place to drive across, with scenery that gave me serene and pleasant thoughts. It was quite a nice drive.

My first stop was in Billings for gas. Normally this is not really anything worth writing about, except that I was a little taken aback by the 85.5 octane ratings here in Montana. I had always been accustomed to 87 octane being the lowest grade fuel. Then, I moved to Denver where it is 85. I did not even know decimals existed for octane ratings in fuel until today.

Another notable thing about Montana’s gas stations is that they have casinos! I took a look inside one of them, and all it was were slot machines and a poker table, but it was still an interesting and unique sight to see. The truck stops here also sold plenty of liquor and such. Montana’s attitude seems kind of like anything goes. It is almost like the people here have found a way to live free of everything uptight about the rest of the country, and avoided the unnecessary behavior restrictions that go along with it. In the grander scheme of things, thinking about this actually makes me feel like Denver may indeed be the place for me. I don’t think I could actually live in Montana, as I am kind of hooked on city life in a way. But, Chicago and New York come out with a bunch of unnecessary silly laws. Denver could be a really good compromise between the two.

Although it was pretty flat (albeit, nowhere near as flat as Nebraska), mountains quickly began to appear. To be honest, I don’t really remember the names of all the Mountain ranges here in Montana. I’ve just gotten to the point where I know most of them in Colorado. But, let’s just say scenes like this one were common throughout the drive. It was common to see mountains, but not have to drive through them like I-70 in Colorado. 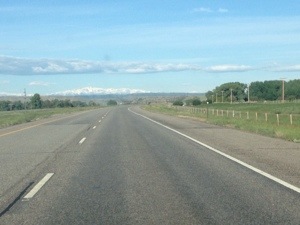 Bozeman was a nice town. It looked pretty well to do, and had some good Western qualities to it.

With a couple of hours to spare, it was time for me to get my Lewis and Clark on. Those that know me know that I love to hear about the journey of Lewis and Clark and actually wish to recreate the adventure on my bicycle someday. In fact, that is the reason I know about the Adventure Cycling Association, as they are the organization that outlined a route in which to follow this historic mission on my bicycle.

So. We took a stop at the Missouri River headwaters, an important point on the Lewis and Clark journey, as well as a very significant place in our nation’s water system. The Missouri River is formed near Three Forks, MT, where the Madison, Jefferson, and Gallatin rivers meet. The Missouri River is actually the longest river in the U.S.A., running from this point all the way to Saint Louis. But, could it be even longer? Who was the one who decided that these three rivers, by three separate names, came together to form the Missouri? Why isn’t it two rivers flowing into the Missouri? This are the questions we pondered while throwing sticks into the river, knowing that sometime next month they would show up in Saint Louis, an amazing feeling. 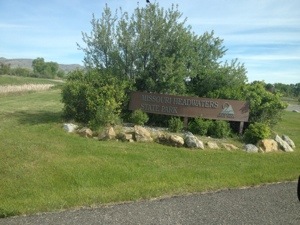 After this, we passed over the continental divide, which was only at 6300 or so feet. Significantly lower than in Colorado, where the divide is consistently over 10,000 ft. I notice a few cool rock formation, and also a lack of pine beetle damage to the trees. Last year’s drought did not extend this far north, and therefore Montana’s forests, unlike those of Colorado and South Dakota, actually look pretty much in tact.

After a little bit of construction, I finally arrived at my destination, Missoula, MT, and the organization I had been reading about on the Internet for a decade.