Yellowstone National Park was the first National Park in the United States, created in 1872, which seems to be before anyone really cared about preservation or anything like that.  It also appears to be the best known National Park, the first thing people think of when they think of National Parks.  Oddly enough, though, it is one of the toughest to get to.  It is two hours away from the nearest interstate highways, both I-90 and I-15.  And, those highways are not frequently traveled.  Denver is something like ten hours away by car, and with the possible exception of Boise, I do not even want to imagine what it would cost to fly into a closer airport.  So, I would not want to pass up the opportunity to visit this park, even if it is for just one day on my way back from Missoula. 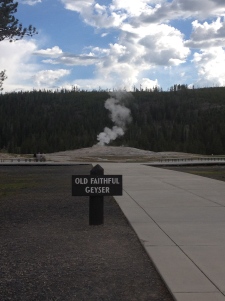 Approaching from the West, via West Yellowstone, it is natural to enter the geyser part of the park first.  Old Faithful is the famous geyser that you see in all of the postcards about Yellowstone.  It is the biggest geyser, but not the only one.  In fact there are hundreds of them, maybe thousands, I don’t really know because I did not go everywhere.  All of these geysers, including Old Faithful, steadily emit steam whenever they are not “erupting”.  I am not sure if erupting is the right term for it, but as you know these geysers spew out water.  Apparently, it used to occur on a regular pattern, once every 50 minutes, but then something changed, likely the earthquake in 1959, and now the eruptions of this geyser are irregular. 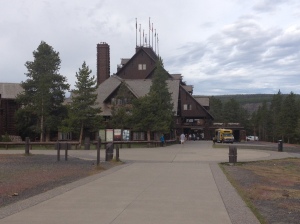 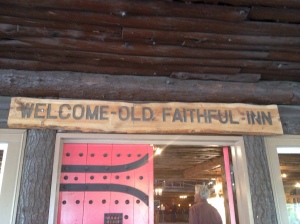 Having time before Old Faithful “erupts”, we checked out the Old Faithful Inn, which is a famous hotel built right next to the geyser about 100 years ago.  I think pretty much every article I have ever read about Yellowstone, as well as every special on the Travel channel or whatever, has mentioned this place.  It would be quite neat to stay at a hotel right next to one of Yellowstone’s defining features.  In fact, there is even a balcony on the second floor on this hotel where you can actually see the geyser from.  If I ever did stay at this hotel (which probably won’t happen as I am assuming it is hella-pricey), I would definitely make a point of watching at least one “eruption” of Old Faithful from the second floor balcony.  With a really good breakfast, and pleasant conditions as they were yesterday, the only thing that could possibly make the experience better would be a 711 slurpee!  For my first ever viewing of the eruption of Old Faithful, which was predicted to be at 9:04 A.M., and occurred roughly three minutes later, I viewed it from the ground along with everybody else who was there.

If a picture is worth 1,000 words, than seeing this in person would be worth at least a million.  Really, sorry to disappoint you, but it would be futile to even attempt to describe this.  I think all of the billboards in Chicago describe it as “three Buckinghams tall”.  That is a good start for anyone that knows about that place.  I’d say visit the park.

The geyser erupted for a few minutes, and after watching the eruption, we decided to walk towards some of the other features in that area of the park.  Still amazed by the experience of Old Faithful, headed toward this boardwalk with some other geysers, pools, and hot springs, we encountered a woman with her legs straddled across the ground, and a fancy camera shaking her head.  She made several comments to us about how disappointed she was in this Old Faithful eruption.  She eluded to previous viewings of this geyser being much better.  From what she was saying, it sounded like she was referring to something 15-20 years ago, in the 1990s, but I am not 100% sure because as soon as she started talking my mind began to wander out of sheer shock that someone could find something negative to say about this event.

To be honest, I do try to give people the benefit of the doubt.  Maybe the eruptions of Old Faithful in the 1990s were larger- who knows.  But, I can’t help but think of the possibility that she represents a certain type of people that we all have encountered at some point in time in our lives.  These are the people some refer to as “critics”.  No matter what happens, what goes on, they are always focused on the negative aspects of it.  They could be on vacation on a world class boat cruise in perfect weather around their favorite people ever, have a great time dancing by the pool, and get a call from their boss informing them of a raise and a promotion, and they would still focus on the fact that their hot dog came with yellow mustard instead of spicy brown, and embellish on that point.  More significantly, people like this can be a drain to be around sometimes.  Not only because of experiences like this, but anytime making plans with people like this, they are focused on what could go wrong instead of what could go right.  When you tell them about your ideas for what you want to do with your day, you week, your life, what they say to you undoubtedly plants the seeds of doubt and failure in your mind, rather than the seeds of confidence and success.  Maybe all of this is why this woman was alone.  But, once again, I do not want to make a judgement on someone who I met for only two minutes.  There are plenty of good reasons for people to take trips all by themselves, and I have known people to do this and come away with amazing experiences.  So, I am in no way going to make assumptions about this particular person.  I will only use this as a reminder of what kind of people tend to bring others down.  There is a book out this year that seems pretty popular called “Friendfluence” that actually addresses the issue of how the people you chose to associate with effects your personality and success in life.  I am lucky to have a lot of great positive friends that clearly do not fit into the category described above; some of whom I saw last weekend, some of whom I will get to see later in the week, some of whom I will see upon returning to Denver, and some of whom I hope to see again soon. 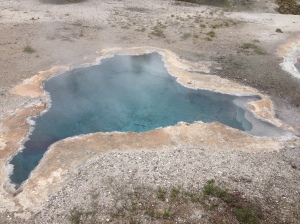 The other interesting features in the vicinity of Old Faithful are hot springs and smaller geysers.  I put my fingers in one of the hot spring’s resultant rivers, and verified- they are hot!  Many of these smaller geysers are constantly erupting in a way.  I hate to gloss over these features, as they are really neat.  But, this is a blog about Yellowstone, and I do not want to make it 10 pages long.  I guess people do write whole books about this place.

Yellowstone is big!  I guess I should have realized that when I saw that it did not fit onto one page of my Wyoming DeLorme Atlas, but I guess I was still not thinking of it as being as big as it is.  I think the park is almost 100 miles long and 100 miles wide.  Either way, it is quite possible, especially with the number of people that stop to take pictures of bison, elk, moose, and such, for it to take over an hour to get from one feature to the other.  So, we had to have a clear plan to get to the most important features in one day, which involved seeing Old Faithful early, and then headed toward Yellowstone Falls via Yellowstone Lake. 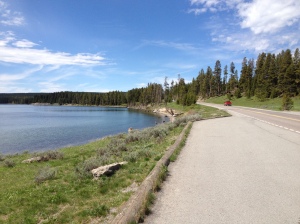 Yellowstone Lake is quite large, and surrounded by mountain ranges in all directions.  Overall, very picturesque.  It is also a good reference point when looking up weather information for the park.  At roughly 7700 feet in elevation, is is close to the mid-point.  There are plenty of hills that reach higher elevations, especially along the continental divide.  There are also some features, like the gorge of the Grand Canyon of the Yellowstone, and even Old Faithful, that are at lower elevations. 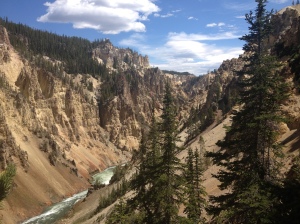 Okay, I know a lot of pictures, but Yellowstone Falls and the Grand Canyon of the Yellowstone also blew me away!  I later read (also in my DeLorme Atlas, they are really great) that these falls are actually much higher than Niagara!  Over 300 feet.  When the falls hit, they actually consistently cause rainbows to form, as water particles are projected upward significantly from the impact of the waterfall.  I do not think I even saw the bottom of the waterfall, as there was too much splash for me to actually see the bottom.  I bet Niagara is also like that.

In the same day, we also visit Grand Teton National Park, which is directly south of Yellowstone, with a gap of only a few miles.  I bet most people that visit one park visit the other one.  However, I bet the people that visit both parks do so over the course of several days to a week, not in one day.  This was definitely a hurried trip, but this leaves plenty more to be seen on a subsequent trip, which, now that I live in Denver, is not out of the range of possibilities.

The main feature of the Tetons that stand out are the mountains themselves.  Grand Teton, the highest peak in this mountain range, has a height of 13,770′, making it only 34 feet shorter than the highest peak in Wyoming.  These mountains are actually visible from parts of Yellowstone park, and began to really appear as we approached the Tetons.  There is also a lake here, called Jackson Lake.  Jackson Lake is slightly smaller than Yellowstone Lake, and at a lower elevation.  In fact, it began to feel hot when we arrived here, well into the 80s.  It may have hit 90 somewhere nearby.

This whirlwind of a trip also took us to Jackson, which is quite a happening town.  It is probably best known for Jackson Hole ski resort, one of the premier ski resorts in the country, but is also less than 20 miles from the Tetons.  This provides the town with somewhat year round activity, and was quite lively in activity despite the ski resorts clearly being closed.

It was kind of odd visiting an area known to be cold on a hot day.  On a day when Denver hit 99, it is nice to be up in the mountains where highs were in the mid 80s.  However, I did get an experience that is probably significantly different than a typical experience of someone that lives in this area.  The average high at Yellowstone Lake at this time of year is about 65.  It’s a few degrees warmer in Jackson.  Oh well, this warmer weather makes up for the 34 degree morning in Custer on Wednesday. 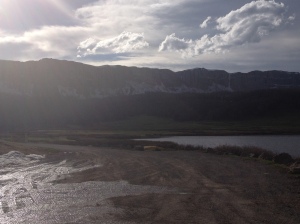 The return trip also involves some more interesting features, all near a mountain range called the Wind River Mountains.  This mountain range contains Wyoming’s tallest mountain, Gannett Peak, and is home to the National Outdoor Leadership School.  And, with the town of Dubois (pronounced in a non- French manner, as I was repeatedly told) has a place called the National Bighorn Sheep Interpretive Center.  It would be interesting to see what really goes on there, but as of right now, I imagine a dog whisperer type character trying to figure out what Bighorn Sheep are saying.

Okay, well that was a lot to explore in one day, and I am 100% sure I missed some things, so hopefully I get to come back here.