The United States of America is not perfect.  There are definitely some aspects of our history that seem a bit shady, and there are definitely some things I would change if I had my way.  But I still love this country, and feel lucky to live here.  One of the things I love about this country is that we attempt to accommodate nearly everybody.  We have lifestyles that range from the crowds of Manhattan to empty parts of Wyoming, and many other things in between.  Despite the fact that I have come across a few Americans who would like to eradicate one or more of our prevalent lifestyles, we remain a county that accommodates.  If anything, we are becoming more accommodating, as more and more places add bike lanes, and some communities allow people to follow their dreams of traveling everywhere by golf cart.

To get to the top of the mountains in Colorado, we also accommodate many different methods.  Most Coloradans prefer to hike up our tallest peaks, and nearly every tall mountain here has multiple hiking trails to the top.  Two of Colorado’s tallest peaks, Mount Evans and Pike’s Peak, have paved roads to the top.  During the summertime, people can drive or ride a bicycle to the top of these peaks.  In fact, the ride from Idaho Springs to the top of Mount Evans was featured as one of Bicycling Magazine’s Top Bike Rides.  Pike’s Peak can even be reached by train.

The easiest way to the top of a mountain is to drive.  Having already hiked three of these peaks this summer, I decide to take a drive (or, more accurately, go along for a ride) up Mount Evans.  The road up to Mount Evans is actually North America’s highest paved road, and a very scenic one.  There are plenty of wonderful places on the way up this highway, including dense pine forests, alpine lakes, and places where you can see the mountains in the distance.  These are the kinds of images you will often find on a calender. 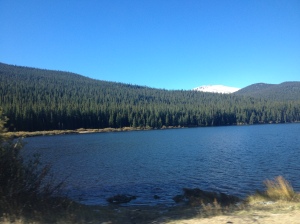 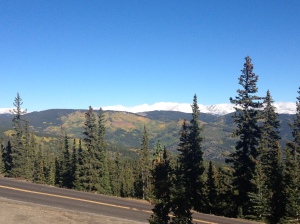 One added bonus of taking this trip in late September was the fall colors.  The fall colors here in Colorado come primarily from the Aspen trees, and primarily turn the color yellow.  This makes a fall image here in Colorado quite different than what you would see in the east.  Firstly, with more pine trees here, not all of the trees are changing colors.  And, with the trees mostly changing the same color, yellow, there is less variety.  In that sense, I would say anyone looking to take a vacation for the primary purpose of viewing fall foliage would be better off going to New England or the Smoky Mountains.  But, the colors did add an extra element to the views on this trip. 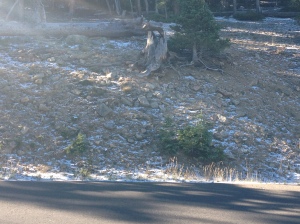 Some places in higher terrain just recently received their first snow of the season.  The snowfall was not particularly heavy, but it still could be seen, especially from the shaded areas once we climbed above 9,000 feet. 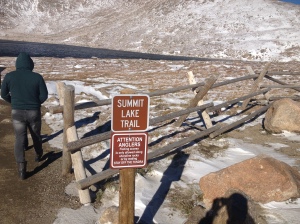 As a result of this recent snowfall, as well as a heavier snowfall at the highest peaks (during the floods a couple of weeks ago), the road was not open all the way to the top of Mount Evans.  The farthest up we could go is Summit Lake, which is around 12,800 feet in elevation.  This is not too atypical, as these higher elevations typically start receiving snow in September, and plowing a road at this elevation is not an easy task. 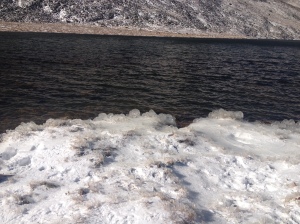 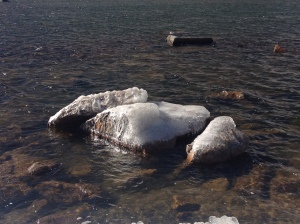 I love science!  I love the way some scientific phenomenon can create some unique observations, and I love the process of figuring it all out.  It was a very windy day at Summit Lake, and I could feel it as soon as I got out of the car.  In fact, the wind confirmed for me that it would have been quite unpleasant to try to hike at this elevation.  What I observed on this lake is a phenomenon I had seen years back when I was living in Madison, WI.  On a cold, windy morning, the wind blows water off of the lake onto nearby grass and rocks.  If it is cold enough, those water particles freeze on contact, much as they would in an ice storm.

When I observed this in Madison, WI, it was a similar situation.  In that case it was December, as it gets cold a lot earlier in the year at high elevations, but the progression of events is the same.  Water has a higher heat capacity and therefore both warms up and cools down slower than air.  It takes more than a few cold mornings to freeze over a lake, even a smaller lake like this one.  So, at the time of year when winter-like chill first arrives, this phenomenon can be observed near lakes.  Larger lakes like Lake Michigan and Lake Superior never freeze over in the winter, and sea spray events like this one can be observed pretty much all winter long.  Although I have seen the result of this combination of weather conditions a couple of times, I am now kind of curious to see it actually occurring.

The world is a tough place to understand.  Life often seems to unfold in ways that do not make too much sense.  Often times, after a particular endeavor does not turn out the way I had hoped, I spend a good deal of time scratching my head, wondering why.  When something impacts my life in a negative way, my response is always to try to figure out where it went wrong, as to avoid making the same mistakes.  But, most of the time it does not work that way, particularly when social interactions and group dynamics are involved.

In a way, I feel like I can take comfort in science.  In science, there are universal laws, and certain things that will always behave the same way, even in an unfamiliar place.  The cold windy night on Summit Lake created the same ice patters that it did on Lake Mendota.  No matter where you are light waves of 550nm will appear green to the human eye.  This, and a host of other things, can be counted on, will always make sense, and can provide some comfort in unfamiliar situations.  Yet, unlike some predictable things, like re-watching movies and T.V. reruns, it does not become mundane and uninteresting over time.  There is always something new to be discovered, a new phenomenon to be observed and investigated, and a new possibility to be opened up. 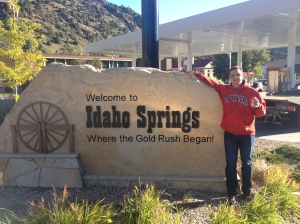 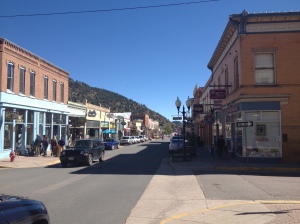 On the return trip, we stopped in Idaho Springs, walked around and ate lunch.  I have driven by this town many times, but never really spent much time here.  In a narrow valley, with steep terrain on either side, the town actually has some houses on higher terrain.  From the highway, it’s appearance consistently reminds me of model train sets.  In addition, the town, which champions itself as “Where the Gold Rush Began”, actually named it’s high school team the “Golddiggers”.  I still wonder if the the marching band plays that Kanye West song when the team comes out onto the field.

I was pretty impressed with the downtown.  It is a nice, kind of small, western town.  It is not over touristy, as it is not adjacent to a big attraction the way Estes Park is.  The shops seem well kept, and also seemed to have variety.  We ate at Tommyknockers, a microbrewery downtown with bar food, and also a lot of buffalo burgers.  From walking around town, I see several other places I would like to try, on subsequent trips.  But, I really do not know when I will be coming into town again, as it is not a typical stop-off for me on ski trips and such.