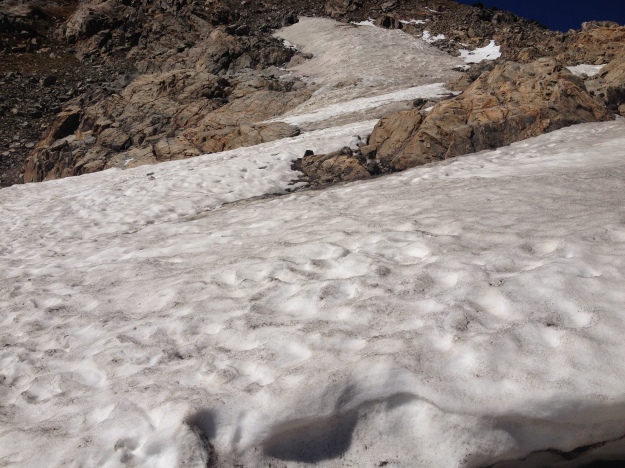 It’s the first of October.  The temperature is around 60 degrees, and the sun is shining.  It is the type of weather that would have certainly depleted 6-12 inches of snow back in any East Coast or Midwestern city.  And that is with a wintertime sun angle, and much more atmosphere to obstruct the sun’s impact on the snow.  With this weather being possible on the first of October, it is quite likely that many warmer days occurred on St. Mary’s Glacier during July and August.  Despite all of this, the Glacier still sits here, occupying the little piece of ground in the mountains of Central Colorado that it occupies.

Part of me is actually bothered by it’s existence.  At roughly 11,000 feet in elevation, and at about the same latitude as Denver, it feels like it needs to be either higher or significantly farther north to exist.  Most other glaciers in Colorado are significantly higher in elevation.  So, knowing it is at a latitude an elevation that produces so many 60 degree+ temperatures, how does St. Mary’s glacier exist?

That is the question I pondered today, after driving past some of the best fall foliage I had seen thus far in Colorado, and climbing a rocky 3/4 mile trail to the base of St. Mary’s Glacier.  Before getting to the glacier, the trail meanders by St. Mary’s lake, a lake pretty much produced by melting glacial waters.  I would not recommend going into this lake, as the water is really cold!  However, it would be really dumb of anyone to not realize this, as the glacier is in clear view, along with the water running off from it.  It is clear for anyone to see that the water in this lake was recently part of that glacier 100 feet or so up the hill. 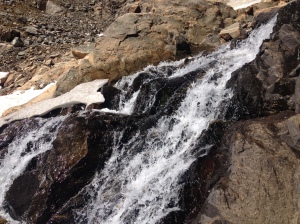 The cascades of water along the trail were moving quite fast on this day.  That made sense, given the warmth and sunshine.  But, it still seems to me that 4 months worth of weather like this would eliminate any snow and ice remaining on the surface.  So, what is going on?

Well, the weather in Colorado is actually quite complicated, and highly dependent on local terrain features.  Snowfall rates can vary significantly from location to location in the mountains depending on the wind pattern and terrain.  In fact, this variance caused enough frustration to motivate a local ski enthusiast to create a web page dedicated to finding the best snow and snow conditions in the area.

The terrain features at this particular location must cause snowfall to be significantly higher here than at similar locations I had previously visited.  Earlier this summer, I climbed Gray’s and Torrey’s Peaks.  The trailheads were at about the same elevation as the base of St. Mary’s Glacier, maybe even a little bit higher.  Yet, no glaciers existed.  Another possible part of the explanation is cold air funneling between the two mountain peaks that surround the area.  Unfortunately more detailed observations would be needed to actually conclude that this is why this glacier exists at an altitude where it shouldn’t.

Another conclusion that cannot be made simply from my observations today is the long-term (decades) fate of this glacier.  With the current heated debate about anthropogenic global warming, it is easy for one to view how rapidly the glacier is melting today and consider it evidence that the earth is warming, and that this glacier is melting.  However, the melting of some of the ice and snow on the glacier during the summer months is actually part of a glacier’s annual cycle in which snowfall in the cold season adds to its’ mass and melting in the warm season reduces it’s mass.  If there were no mass reduction of a glacier in the warm season, they would ever expand at the expense of our oceans. 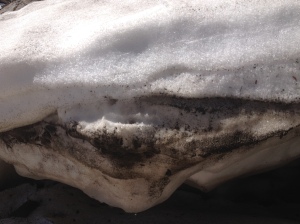 In fact, a close up view of the glacier’s ice shelf showcases this annual cycle.  This ice shelf has very white looking snow on top of a darker layer of snow.  The snow on top is newer snow, most likely from the most recent snow season.  On a warm day like today, it had the consistency of wet, snowball making snow.  However, the dark layer of snow underneath had a much icier consistency, indicating that it had survived multiple summers.  This is, in fact, an easy way to verify with no other observations or knowledge that the snow field you are looking at is indeed a glacier (as opposed to just residual snow from last spring).  Some of the ice in this middle part of the glacier has likely been around for decades.

The bottom layer of the ice shelf was dripping pretty rapidly from the melting.  There may be some really fun icicles here on some cooler days.  Given that melting is occurring this rapidly October 1st, it is possible to speculate that this glacier is losing mass over time, but that can only be concluded with more observations.

With it being warmer here than at most glaciers, it makes sense to me that this would be a popular attraction.  What makes less sense to me after today is why people seem to prefer to drink water from glaciers.  At least I see it all over advertisements for bottled water (i.e. the Evian Logo).  Today I saw ice and snow in constant direct contact with dirt and rocks, walked on by humans and dogs, melt and run off into cascading streams where the water is also consistently in contact with dirt, rocks, and possibly more dog pee.  This did not feel to me like the cleanest water I could be drinking.  I guess there are no chemicals.  Still, I think I will trust my city’s water purification system.

Maybe rather than being bothered by this glacier’s existence, I should be inspired.  This glacier has managed to continue to exist despite not so favorable conditions.  It is much like the one remaining factory in a decaying rust-belt town, or that tree in Wyoming the grew out of a rock.  They later built Interstate 80 around this tree, further disrupting it, but it still persists to be alive.  Like that tree, St. Mary’s glacier, and that one person you know who doesn’t seem to have any bull-shit at their job, evidence that bucking the trend is possible is still out there.  It is just a matter of finding out how they did it, and how much of it is luck.

3 thoughts on “An Unexpected Glacier”