Only half an hour outside of Golden, Colorado, Golden Gate Canyon State Park represents one of the easiest hiking places to get to from the Denver metropolitan area.  It is definitely a lot shorter of a drive then Rocky Mountain National Park, but is probably a little bit longer than The Flatirons in Boulder.  My visit to this park was not in peak season, on the 19th of October, but it was on a weekend.  Based on what I saw today, it appears that this park is significantly less crowded than both Rocky Mountain National Park and the Flatirons, and therefore may represent a more tranquil alternative to those two destinations for day hikes.

Yesterday, we visited the east side of the park, parking in the first parking lot in the state park off of Crawford Gulch Rd.  At this parking lot, our elevation was just short of 7,800 feet.  I have to admit, I was a little bit apprehensive about doing a hike this high in elevation well into October.  Last spring I came to the conclusion that the in-between seasons, when it is not warm enough to for activities at high elevations, but not quite ski season, are the best times of year to explore areas at lower elevations.  But, I knew that it was going to be a warmer day in Colorado, with southwest winds, and highs in the 60s in Denver, which would mean temperatures could be tolerable at this elevation. 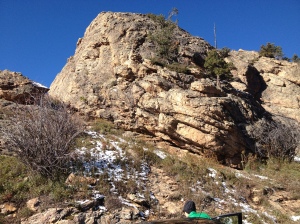 Upon exiting the car, I immediately noticed two potential hazards.  One was the wind, which was quite strong that day, and made the temperatures, near 50 at the time, seem quite a bit chillier.  It did not help that our hike’s destination was a place called “windy peak”.  I kept thinking to myself, if it is this windy at the trailhead, I am in for an unpleasant summit.  Second was the fact that hunting is permitted in pretty much the entire area where we would be hiking.  Most likely, this is one of those irrational fears that we all seems to have.  It’s kind of like all of those posts we see that indicate that more children get injured by trampolines and swimming pools than by strangers, yet, most parents seem way more afraid of their kids talking to strangers than using their backyard trampolines and swimming pools unsupervised.  But, for some reason I did get a little nervous when I saw this sign.  Luckily, I was able to put this out of mind pretty quickly.  We would only see one group of hunters on this hike, and they seemed like they knew what they were doing.

On this hike, we dealt with the remnants of two recent weather events.  First was the major flooding event last month.   In fact, one of the roads to the trailhead was washed out by this flood and closed.  We had to park right by the main road, and hike a little extra to get to the trail.  This was no big deal, and based on this, we could see why repairing this road would be a relatively low priority for the State of Colorado (compared with, say U.S. highways 34 and 36 near Estes Park).  We also had to traverse through some snowy areas.  Friday morning, Denver actually received it’s first snow of the year (which seems really early to me).  There was more snow in the mountains, and parts of the trail, especially those in the shadowy areas, and near our highest elevations, were snowpacked.  The snowpack, however, did not exceed 6″, where it would start to make the hike tougher and eventually impassible.  It did, however, make some downhill stretches a bit slippery and more hazardous than normal. 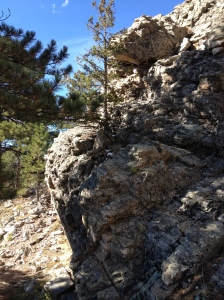 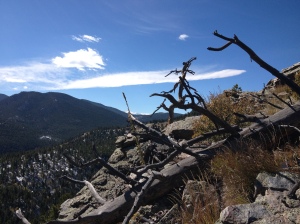 Somewhere between 1/2 and 2/3 of the way up, we saw a couple of neat rock formations, like this one, and decided to go off trail and take a few side excursions.  This mostly meant physically climbing up the rock, and then rejoining the trail the next place we see it.  It’s the kind of thing I periodically do with hikes that are not going to completely exhaust me (like a “14er”) to add a little extra spice to the experience.  Upon completion of the second of these side excursions, I saw the tall peaks in the distance for the first time.  These peaks, which I would later be able to identify as Mt. Evans, Mt. Bierstadt, Gray’s and Torrey’s Peaks, showed up in the southwest sky. 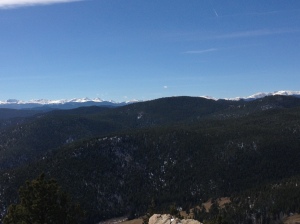 The end part of the hike involved traversing through a fairly uniformly snowpacked and fairly dense forest.  We arrived at Windy Peak, whose elevation is just shy of 9,100 ft.  The views from windy peak are pretty spectacular, but, as promised, it was quite windy here, and quite chilly.  It was definitely windier than it was at the trailhead, and this hike seemed to follow the similar pattern of the summit being significantly windier than even places a mere 50-100 feet down the mountain.  Due to the conditions, we did not remain at Windy Peak too long.  Basically, we remained there long enough to eat a cliff bar without feeling like we were rushing through it, and to take a few pictures.

On the way down the mountain, we actually noticed significant snowmelt.  In fact, the road to the park was icy in the morning, but clear in the afternoon.  We also came to the conclusion that Golden Gate Canyon State Park is one of the best signed hiking destinations we had ever been to.  Every trail junction has signs like these, with a complete map of the park, and arrows pointing to where to go.  I’d say getting lost at Golden Gate Canyon State Park is next to impossible!

Colorado is full of places to explore.  In fact, as a relative newcomer, it is somewhat overwhelming.  I think I am finally well versed on all of the skiing options in the state, and I am getting a handle on all of the whitewater places.  But, hiking, climbing, and bicycling, it seems like can be done almost anywhere.  And nearly every trail area seems to have trails varying from easy to very difficult like this one.  How any Coloradan chooses where to go on a particular day remains a mystery to me