This week, it is with great sadness that I say goodbye to a travel partner that has been with me for over a decade; my 1997 Chevrolet Malibu.  After showing signs of weakness for several years, it’s performance just recently started declining rapidly, to the point where it can no longer be driven with any degree of confidence.  At its age, it would be quite difficult to justify spending any more money on repairs.  After holding on to this vehicle, potentially longer than I should have, it is finally time to say goodbye, and time to move on.

To some people, a car is just a car.  It is just simply a tool for one to get from place to place, just like any of the other pieces of machinery they own.  Obviously, those that lease new cars every three years do not get attached to their vehicles, preferring to always have the latest in technology.  And, there is no clear reason to have any kind of emotional attachment to a mechanical object with no thoughts or emotions of its own.

However, as someone who loves to travel (and is addicted to being in motion), I cannot help but be extremely sad to know that I have taken my last drive inside this vehicle.  The feeling of being inside this car, and being behind the wheel is one that I had become so accustomed to, it almost felt like second nature.  For some time, it felt like a place I really belonged, and there was definitely a year or two in there when I felt more at home inside this car than the places where I actually lived.

When I purchased this vehicle, I was still in college, and longing for the independence associated with having a car of my own that I can drive at will, at any time I wish, and to any place I wish.  Like any guy that has not turned 21 yet (and even many who have), I thought that having my own car would make me more interesting, more popular, and more desirable.  I had somehow thought that having my own car would help fill one of the missing pieces of my life.

The year before I bought my own car, I had been using many different cars to get places.  Some belonged to family members, some belonged to friends at college.  But, all were different.  None were mine.  I did not really become particularly accustomed to the specific dimensions, specific quirks, and optimal use of any of those vehicles.  That, of course, changed when I bought my first car.  It was my first major purchase as a young adult.  For the first time in my life, I could call something major my own!

In a way, the story of my first car is the story of my own coming of age.  However, coming of age also means a fairly rapid rate of change and significant turmoil.  Most young adults experience a significant amount of turmoil in their lives as they go through college, start their careers, try to establish themselves as adults, and determine kind of person they were destined to be.

My vehicle saw me through the transition to graduate school, several career related disappointments (or setbacks), numerous relationship related fumbles, lots of really crazy travel, lots of adventures, and even some lewd behaviors I am not proud of.  It was also the setting of some of the more significant discussions I had with trusted friends, in which we would attempt to navigate some of the situations that puzzle young adults, and ponder our futures as they were unfolding in front of us.

Traveling not only provides adventures, stories, places to be, things to do, and ways in which to see the people I care about, and take part in activities I love, but it also provides an outlet.  Often when I feel frustrated, disappointed, or short-changed by life, I just need to go somewhere, get a change of scenery, and get a fresh perspective.  I did a significant amount of traveling well before I decided to start writing this blog, and took some major road trips.  In a way, I did exactly as the commercials at the time told me, I saw the U.S.A. in my Chevrolet.

I knew this day would eventually come.  In fact, it came significantly later than I had expected.  Over the years, I became increasingly interested in bicycling, and subsequently moved to the City of Chicago, where significantly less miles are driven in day-to-day life.  So, despite my car being 17 years old, it reached 150,000 miles only a few months ago (now at 151K). 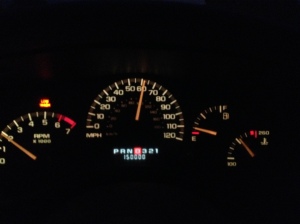 Still, as I struggled to get this car started for it’s last spin, I felt a sadness that was tough to explain.  I’d look at the car, and think of all of these memories, all that I had done, all that I had gone through, and how my years of coming of age shaped me into who I am, for better or for worse.

Life should never stop being an adventure.  I shared many of my adventures in the Midwest with my Mailbu.  There was no better car for all of those nights cruising on Dundee Road, those days passing people on the right on the Chicago Skyway, racing down I-65, or looking for tornadoes in Iowa.  Now that I live in Colorado, I am having completely different kinds of adventures.  And, although I am sad to have lost a travel partner that suited me well for a long time, I have been provided with an opportunity to find a new travel partner that is quite suited for the adventures I am destined to have in this part of the world.

This morning I purchased a brand new Mazda CX-5, which may just be my travel partner for the next decade to come (or more).  With high clearance and all wheel drive, it is well suited for the State of Colorado.  With a little more pep to the engine than many of the other vehicles in it’s class, it also suits who I am.

Maybe these vehicles are just simply vehicles, inanimate objects built by humans.  Or maybe I had a loyal travel companion that selflessly determined that it had become time to step aside for another- one that suits where I now am a bit better.