We humans seem to have some kind of fascination with moose. There must be something about that animal. Several years ago I was on a weekend ski trip in Breckenridge. The condo our group stayed in had a moose theme. Every decoration .. moose. The pictures hung on the wall. The design on the pillows. Even the back of the couches. It was impossible to rotate my head more than 15 degrees without seeing six new images of moose, in one form or another.

It is nearly impossible to drive around Colorado, or anywhere in the West, without eventually seeing cars with decals like this one.

Two years ago, when I rode my bike through the White Mountains of Central New Hampshire, I saw advertisements for numerous “Moose Tours”, in the town of Lincoln, NH. These tours involve a bunch of people crowding in a van of some sorts and heading out into the wilderness to look for moose. A subsequent Google search revealed page after page of companies offering moose tours. There are a lot in New Hampshire, some in Maine, a bunch in Canada. There are even “Moose Safaris” in Norway and Sweden!

Added altogether, there has to be at least hundreds, possibly thousands, of people who earn a livelihood helping tourists see moose!

I woke up on a mid-summer Saturday morning without a real plan. I wanted to go by instinct, as I’ve been trying to avoid overtaking things lately. That instinct told me to head to Grand Lake, a place I had actually not been to before.

Grand Lake is perhaps best known for having Colorado’s largest naturally occurring lake, however, the town itself is pretty interesting too.

Just West of Rocky Mountain National Park, it attracts a lot of visitors and tourists, not unlike Estes Park, the more well known town east of the park. Compared with Estes, it is a little bit quieter, and the buildings also have somewhat of a more western feel.

It is also apparently near the part of Rocky Mountain National Park where visitors are most likely to find moose. I had no idea when I decided to hit up the Green Mountain Trail, the first major trailhead one encounters after entering the National Park from the West.

I just knew I wanted to be out in nature, and have a break from my pursuits back in Denver. I knew there was some sort of healing power in being immersed in a place like this. 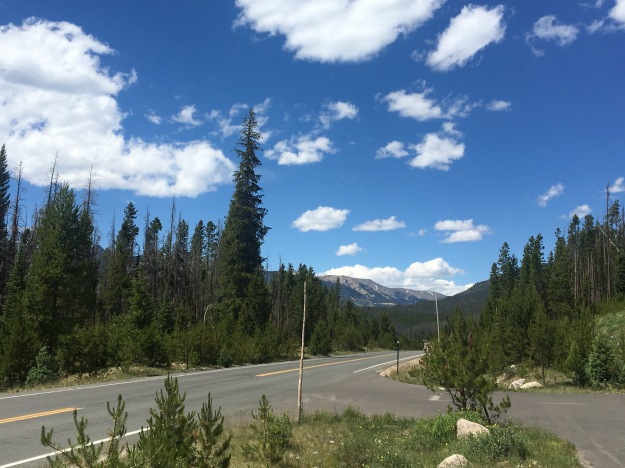 I wasn’t even tracking my progress along the trail. I wasn’t thinking about where I was, where I was headed, or what I was hoping to see. I was just there, in the moment, in the deep evergreen forests of the Upper Colorado River valley, apparently headed for a meadow, when a woman walked up to me and told me that there was a family of moose 200 feet past the next trail junction, in the meadow, where moose are typically expected to be spotted.

I must admit, that although I do not count myself as one of those moose obsessed people, when I heard this, I got extremely excited- almost giddy. It was a feeling that is hard to explain. It felt almost like the excitement that comes over someone’s entire body when they suddenly hear their favorite song, or that their secret crush asked about them, or that their best friend got them tickets to see their favorite performer. It’s that suddenly bubbly feeling that often comes more frequently from anticipation than an actual event.

They first appeared in the distance, walking up toward big meadow. Two other families were watching them, in awe.

It is never a good idea to get too close to moose. They are dangerous and powerful. This was about as close as I wanted to get. 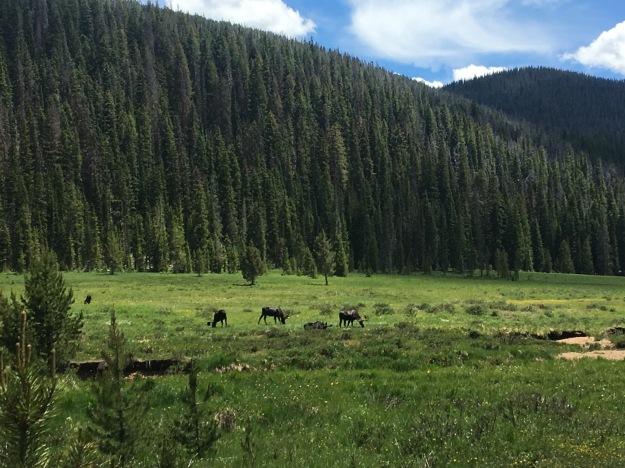 Even from somewhat of a protected distance, it was still an amazing experience. We watched them gradually walk downstream along the Tonahutu Creek in this wide open meadow. I am really not sure if they saw us at all. I imagine they did, but serious did not care. It is as if the moose are the ones that have perfected the art of not caring about the judgements of those around them.

I am actually nearly 100% certain that had there not been a bunch of humans taking pictures of them and watching them slowly walk by, they would not be acting any differently. Maybe I deeply respect that about them. If only more of us humans can learn to stop relying on the approval and attention of others. 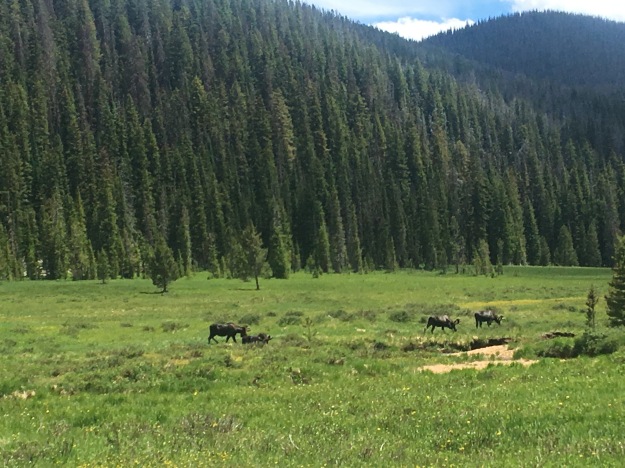 What is it about these creatures that capture so many of our imaginations? There are, after all, plenty of large mammals to be spotted on this planet. What makes the moose worthy of hundreds of tour companies in Eastern North America, decals on countless SUVs, and an entire section of nearly every Western themed home decoration store.

It is probably that the quest to spot a moose has all of the ingredients that any other worthwhile life quest could have. As is the case with learning a new skill like car repair, finding the right date for a school dance, or finding a rare collectable, it is a challenge, a deep one, but an obtainable one. This is important because if a challenge seems impossible, it would not be taken on by too many people. People who do not believe in the existence of BigFoot are not going to go searching for it.

There is also something amazing about the end result. This is important because there has to be some sort of reward that makes the challenge worth pursuing. I do not see a market for a 1,000 piece puzzle that is pure white, with no color, picture, or design. The end result would be nothing. Moose are something.

They are also unique, at least in the realm of the experiences the average human being has throughout their lives, but unique in a non-threatening way. Finding a moose in an open meadow is the right kind of unique. It is a unique people can relate to based on their own experiences, having likely seen something somewhat similar, like a horse, or some of the animals at the zoo. It is not too far out there for one to relate to.

So, in a way, seeing a moose after trying and failing a bunch of times, is a metaphor for obtaining the things we most cherish in this life. We have to work for it. There is some amount of reliance on luck. The reward is something amazing and unique, but also tangible, obtainable, and relatable. Now I understand why so many people love these creatures.