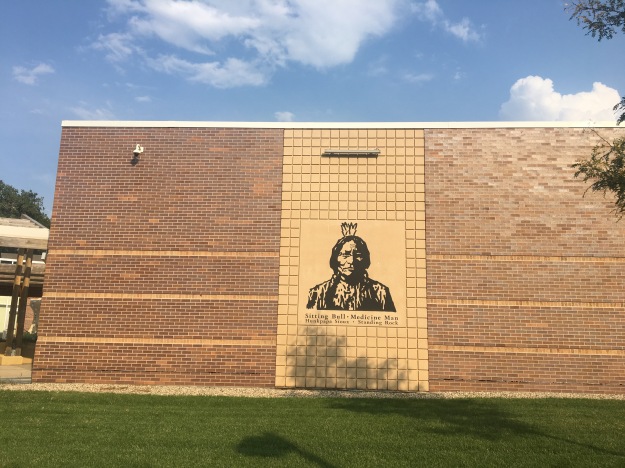 If you are anything like me, on a lengthy road trip, you are always looking for interesting places to stop. Stopping, for an hour or two, or for a night, breaks up the monotony of being in a car,  often on the highway, for many hours in a row. It also helps me take advantage of being where I am, and seeing interesting things I would not have been able to see had I flown. Depending on timing, the Akta Lakota Museum and Cultural Center, in Chamberlin, South Dakota is quite possibly one of the most interesting places to stop and check out on a drive across the state.

Chamberlin is already a welcome break to what can be a monotonous drive. Where I-90 crosses the Missouri river, and interestingly enough close to where explorers Lewis and Clark had one of their more confrontational encounters, the bluffs of the Missouri River contrast with the flat open grassland that stretches about 200 miles in either direction. 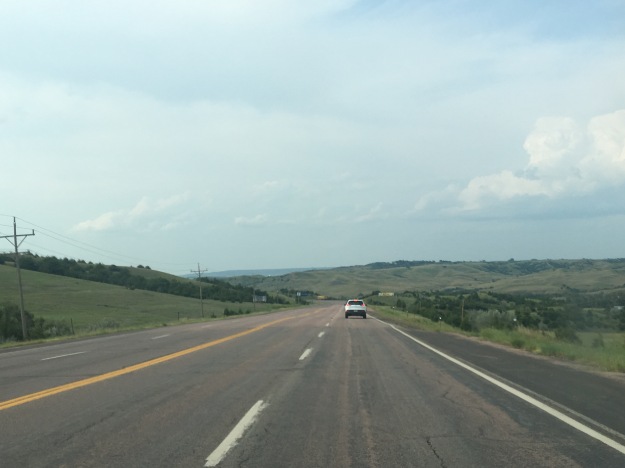 The museum itself is unique as it tells the story of the Western United States from the point of view of the Native Americans, specifically the Sioux Nation. 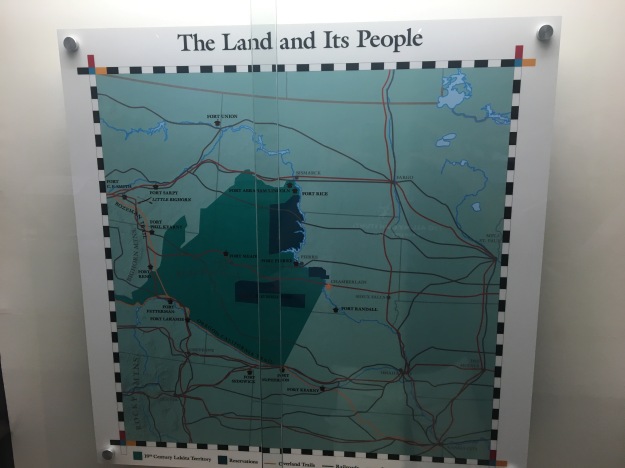 Most other museums about Western history, mention the Native Americans. However, in nearly all cases, the story is told primary from our point of view. 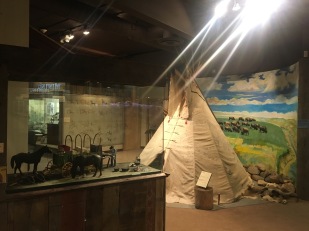 A lot of these museums cover the fir trade and the Lewis and Clark expedition. Some even talk of the Native Americans quite fondly and empathetically, like this statue, named Dignity, also in Chamberlin. It is accompanied by a museum that focuses on the South Dakota portion of Lewis and Clark’s mission.

The Akta Lakota Museum and Cultural Center, by contrast, tells the story of the region from the point of view of the Native Americans. It starts with life before European settlement. One of the first exhibits is an artistic depiction of what life was like across South Dakota before Lewis and Clark, and many of the fir traders had arrived. 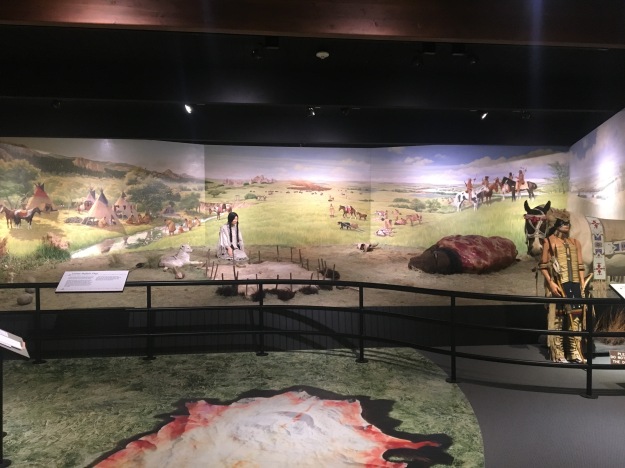 This depiction of life in South Dakota is quite easy to get immersed in. For a few minutes, I felt the way they felt, like I was living the life they lived. It is felt almost like the feeling people get when they truly feel a immersed in a movie or T.V. show and become emotionally attached to one or more of the characters. The people in this mural felt like my friends and family.

It made wish that I cared more, in the grand scheme of things, about the fact that the land they once occupied had been taken from them. Sure, change is inevitable, and given technological progress throughout the world, it is hard to imagine a scenario where South Dakota still looks exactly like this artist rendition today. However, there was a lot of misfortune brought upon these tribes.

This first part of the museum covers the culture of the Sioux. One thing I realized is that, the Sioux, being the group we interacted with most frequently in more recent years, likely created the caricature of Native Americans most of us live with today. The caricature of Native Americans are people who were at one with nature, in a way today’s hard core environmentalists can only dream of. They capture buffalo and use every last piece of it, giving the earth thanks for their bounty.

While this seems to be true of the Sioux Nations that Lewis and Clark encountered, and were among the last holdouts in the “Indian Wars” of the late 19th Century, it was not necessarily true of all Native Americans across the continent. Some tribes even exhausted their natural resources to the point of having to relocate.

What is astounding is how a culture can be so similar yet so different at the same time. 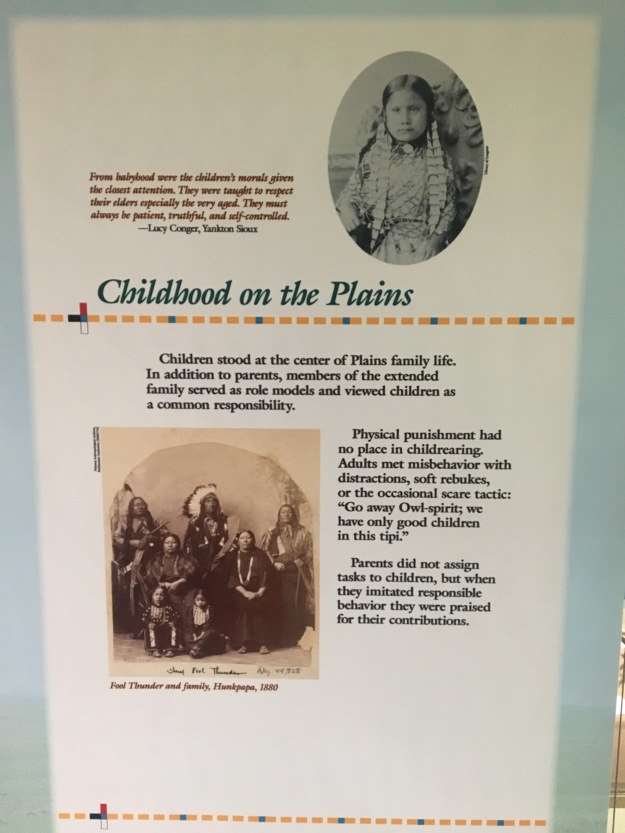 Unlike in our culture, the Sioux place little emphasis on negative reinforcement or heavy-handed parenting. It seems as though positive reinforcement, likely mixed with a bit of peer pressure, generally brought children towards the right path. The general culture is interesting in the context of today’s current cultural divide. They saw children as a common tribal/communal responsibility, but also placed boys and girls on separate paths from a very young age; something both sides can agree with.

The museum then goes on to tell the story of the Sioux after European settlement. This story, oddly, starts out hopeful, which can be inferred from the diaries of Lewis and Clark. First, Spanish settlers brought with them horses, making travel faster. Later, British, French and Americans brought trade and all sorts of new supplies that made their lives easier. They became wealthier too. 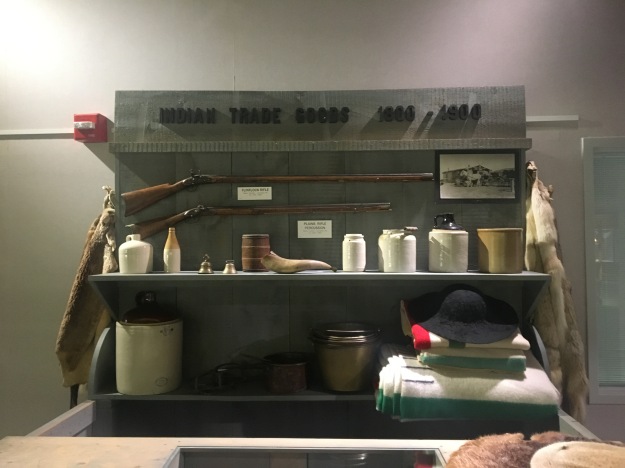 Unfortunately, they also brought disease. One aspect of the story of “How the West Was Won” that is rarely talked about extensively is how much of a role disease played in changing the North American continent for good. With the horses, guns, and new medicines, Europeans also brought diseases that Native Americans had no immunity to. These diseases would unleash plague after plague upon tribes throughout the 19th century, reducing their numbers. By the time the “Indian Wars” would occur, their numbers were reduced to the point that the outcome, victory for the United States, was all but inevitable.

What had started out as an interesting new development with opportunities had turned into a nightmare. The final part of the museum covers the next, equally depressing chapter in the story of the Sioux. For most of the later 19th and early 20th Centuries, the U.S. government would sign treaties, establishing bounders with Native American tribes, only to break them anytime gold, or anything else of value was found on their land. The end result was today’s geographical distribution of Reservations, which covers only about 3% of the land area in the United States.

At this point, I am not sure what I can do about this terrible turn of events. It is hard for me to accept too much guilt for it, as I was born in 1980s New York, a time and a place where all this had already occurred. “My people”, if I can call it that, had happened to already successfully assimilate into the Nation that is responsible for much of the devastation brought upon the Native Americans. I was born into this country, and that is all I really know. Going somewhere else would be foreign to me.

I imagine a scenario where all this never happened, an alternate history, where Native Americans still control the North American continent. Rather than being born in the United States, I would have been born in Italy, spoken Italian and lived Italian culture. Still, in this case, there would likely be some story about how the Romans conquered the Etruscans.

At some point, it becomes necessary, in my opinion, to say that all I can really do is be mindful of history, live the life I know how to live in the place I was born into, for my own happiness, and try to look for a solution going forwards. Unfortunately, I do not have that solution, otherwise, I would probably be doing something else at this moment in time.