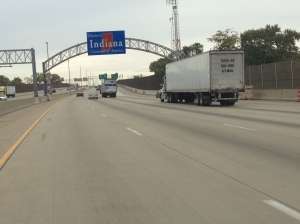 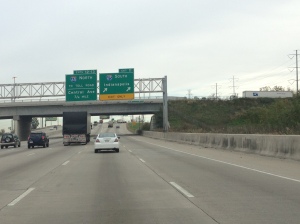 I designed a road trop that would mix the familiar with the new.  The first day of my road trip focused on the familiar, and few roads are more familiar to me than interstate 65 between Chicago and Indianapolis.  During my time living in the State of Indiana, people would often refer to Interstate 65 as “the raceway”.  This, of course, referred to how fast traffic would move on this highway.   Traffic most likely moves this fast on this particular road because the two cities it connects both contain a lot of fast drivers.  At the time when I was living in Indiana, the highway speed limit was 65 and traffic tended to move at a speed of about 80 mph.  Since then, the speed limit has increased to 70, meanwhile gas prices have risen substantially.  Still, with the exception of when trucks are slowing down the highway by passing one another, traffic moves at about the same pace. 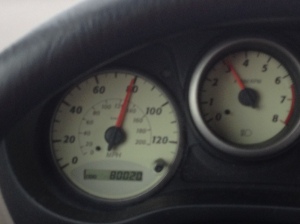 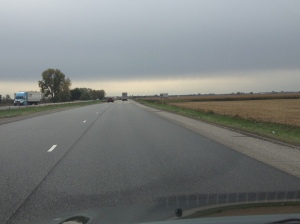 Most of this route would be considered quite dull by most.  It pretty much looks like this, open fields of corn and soy stretching endlessly into the distance.  And, there is little variance.  Nearly every highway I crossed would contain the same features, a few gas stations, and signs pointing motorists to both Chicago and Indianapolis.  For many, this is a dreadfully dull ride, but for me it is slightly differnt.  As I had spent a significant amount of time in the area, and gained a lot of interesting experiences here, the highway actually brought back a plethora of memories for me.  Many of the exits I encountered on this trip reminded me of interesting experiences I had years back.  It was almost like a trip through a period of my life, and almost like I was reliving many of these memories. 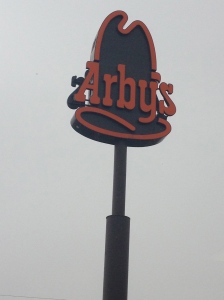 I felt it appropriate to stop at Arbys, a staple of this region.  In fact, whenever I think of central Illinois and Indiana, I think of Arbys, as they are plentiful here.  One time, while driving interstate 55 from Saint Louis to Chicago, I decided to count the number of Arbys- there were 13, and that was only the number I could see signed from the highway. 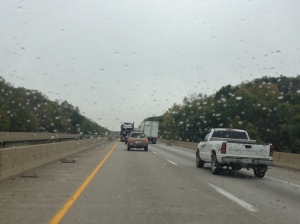 There is one place where the endless fields of corn and soy give way to a very different scenery; in the vicinity of the Wabash River near Lafayette, Indiana.  WIth dense trees, and even a little bit of terrain, this region is always a welcome break from the monotony of this trip, even when I am reliving memories from my past.  In fact, I recollect this area being one of the few areas I explored beyond the local fast food joints and truck stops on this trip.  I was hoping for more color, given that it is well into October, but I heard that the weather had just cooled down recently.  So, the colors will have to wait. 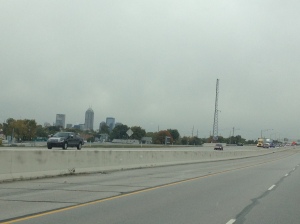 Indianapolis is not a glamorous city.  In fact, it is mostly known for being quite affordable compared to most cities its’ size and larger.  I recall seeing lists that compare median income to median home costs, and seeing that Indianapolis is one of the easiest places for someone with the average paying job to afford a home. 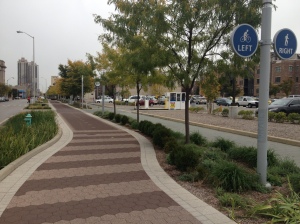 However, it is not without its’ interesting places.  The bike trails here are pretty unique, albeit they do not seem like they would be efficient.  In town, I got the chance to check out the Indianapolis City Market, which seems like the kind of place people go to eat lunch during an average workday downtown.  By the time we arrive there, around 4:15 P.M., most of the businesses seem closed.  However, there is one open establishment, called the Tomlinson Tap Room that serves beer from different microbreweries throughout the state.  They even serve “flights” on boards shaped like the State of Indiana, which I found to be a unique idea. 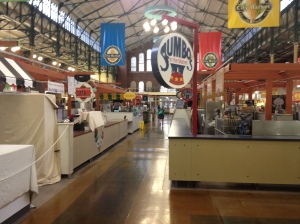 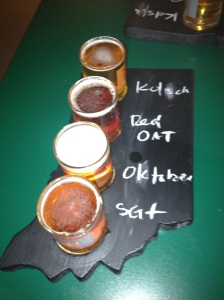 Looking at the clientelle at this establishment, it appears to be one of those after work type of places that tends to die down around 8 or 9 P.M.  Plenty of these types of places can be found in central business districts of many large cities, as other districts are more sought after with regards to nightlife.

Although I can never think of a defining feature about Indianapolis, I always enjoy my trips here.  My last time here was in 2010, when I was Wisconsin defeat Michigan State in the inaugural Big 10 Championship game.  I remember getting pitchers of Long Island Iced Tea for only $7 at a place called Tiki Bob’s.  And this was on a Saturday night, and the night of a major sporting event.  There is something to be said about affordable cities, and even affordable neighborhoods of our own cities.  People here seem to be enjoying the same experiences for a fraction of the cost.  Sometimes I even wonder if the joke is one me, and others that chose cities and neighborhoods that are trendy or well known.  They are probably sitting back, enjoying their $3 drinks and $550/ month apartments wondering why we pay so much to be where we are and do what we do.