How many people can name one company that manufactures baseball bats?

There are probably a lot of people involved with the sport of baseball that can name two or more, but I would reckon to say that most people can name one bat manufacturer; Louisville Slugger.  The truth is, there are over 30 other bat companies, but unlike some other industries, like automobiles and soft drinks, there is a clear leader in this industry.  This is why the Louisville Slugger bat factory is a must see for any baseball fan.  My last time driving through this area, not seeing this bat factory was my one regret, so I have chosen to make this a top priority on this trip to Kentucky. 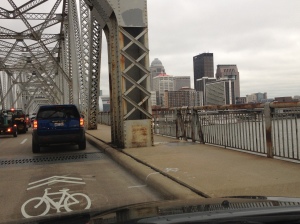 Getting into Louisville was a little bit of a struggle today, as I hit some major traffic and had to take an alternate route.  But, after this minor delay, I was still able to make it in time to get a spot on the 10:00 bat tour.  This is one major advantage of traveling on weekdays.  In fact, time-off considerations aside, I would definitely recommend to anyone to travel in the manner in which I have, designating weekends for parties and such, and leaving the “touristy” activities like this one to weekdays where there will be less tourists.  When being a tourist, you do not want crowds, when partying, you likely want at least some crowds, or are at least less impeded by them- something to definitely consider.

The bat factory tour was well worth the $11 fee, which also included souvenirs, and a museum with exhibits about both the history of Louisville Slugger bats and the history of Major League Baseball.  I am quite astonished by the number of bats this company produces every year, and how quickly they produce customized bats for major league baseball players.  As I watch the World Series tonight, I realize that I will never look at something as simple as a player knowing they have another bat available to them after breaking one the same way again.  A lot of work goes into producing these bats, starting with trees being cut down in the forests of Pennsylvania and New York, followed by the wood being shipped to Louisville to be sorted, cut, and customized to everyone’s individual use.  It is strange to me how easily a ballplayer will throw a bat away due to frustration, slumps, etc. when so much effort was needed to produce that bat.

Louisville is the largest city in Kentucky, and it seems not too different from other cities of it’s size in the region, like St. Louis and Cincinnati.  For some reason they have this gold replica of the David Statue by Michelangelo.  I don’t know why this is here.  But, otherwise, it is just like any other downtown.  I see people in suits talking business.  I see science museums and performing arts centers.  Those sandwich shops where people go to lunch are there.  I even stopped at one. 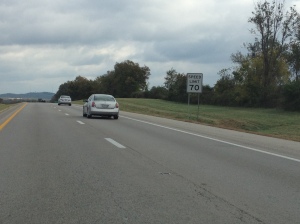 Kentucky is an interesting place.  It is definitely prettier than Indiana, with more trees and rolling hills.  I am glad they finally raised their state speed limit to 70 (from 65).  However, it is a place that is tough to categorize.  It is not quite part of the Midwest region, as it’s neighbors to the north are.  But, it is not exactly a true southern state either.  During the Civil War, Kentucky largely did not take a stance, as it was a “border state” that allowed slavery but did not secede from the union.  For this reason, and many others related to culture, climate, and geography, I can never figure out how to classify the state of Kentucky when I am describing the different regions in the United States. 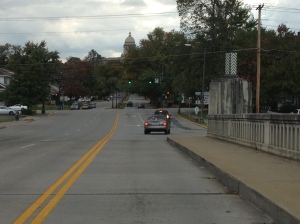 The state is also unique for several other reasons.  I head east to Frankfort, KY, the state capitol, to join up with the famed “bourbon trail”.  Here, I notice something I should have noticed before about the state; how old the buildings are.  Due to the fact that the easiest pass over the Appalachian Mountains was a place called the “cumberland gap”, near the borders of Virginia, North Carolina, Kentucky, and Tennessee, this state was settled earlier than states to it’s north and south.  Kentucky became a state in 1792.  Tennessee in 1796.  The states to the north and south would not become states until the 1810s.

In fact, given its’ size, the town Frankfort, KY most reminds me of is Annapolis, MD.  Throughout the center of town I see historic buildings, dating back to the later 1700s and earlier 1800s, and the buildings have that more colonial feel that is common on the east coast.  The road layout, and tree density all make me feel like I have reached the east, even though at one point in the early part of this country’s history, this was considered the west. 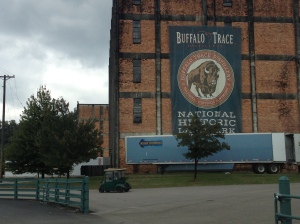 My brief stint on the Kentucky Bourbon Trail first takes me to the Buffalo Trace distillery.  Here, I got to learn some strange facts that are second nature to bourbon enthusiasts, but facts I was unaware of, such as the requirement that a “bourbon” contain between 51 and 79 percent corn to be labeled as such.  From all of the spots on the tour out to the parking lot, the area has a distinct smell.  The smell is probably one that any employee of any distillery has become accustomed to, but it definitely smells strong and distinct.  All I can say is, I would not recommend anyone go to a bourbon distillery on a day in which they are nursing a rough hangover. 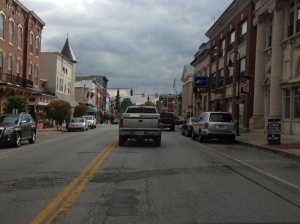 My day ends in Versailles KY (which I am told is pernounced ver-sail-es, and not like the French city), home of the Woodford Reserve Distillery. This distillery produces some more high end whisky.  I drink it “neat” (i.e. no ice), which is what I was told is proper.  I’d say I am drinking it like a “real man”, but I also ordered a water.  So, if I was in an old western of sorts, this would not be acceptable.  Either way, I did drink it the real Kentucky way.  And, to add to the experience, I grabbed a few bottles of Ale 8 (a beverage that is unique to Kentucky), and mixed it with some bourbon for the last drink of the evening.  This gave me to total Kentucky experience.  Earlier this year, rapper Eminem said “Life’s too short to not go all out”.  I have taken a basic equivalent of this message to heart in many of the places I have visited this year, hoping to get the full experience of life in that place.  Heck, I even ate something called “turnip greens” and poured vinegar on them (which I think is the right way to eat them).

There is no real quick way to summarize Kentucky and what Kentucky is all about.  I’d come up with something along the lines of saying that it is like Virginia and Texas had a baby, but that would ignore many of the other unique qualities of this state.  Kentucky produces 95% of the world’s bourbon.  Whisky produced in other states takes on different forms.  Princes and kings from other countries often come to Kentucky for horses.  These qualities are not shared by neighboring states the way one can say Illinois produces corn, like Indiana and Iowa.

Perhaps Kentucky is trying to teach me a lesson.  Maybe it is time for me to stop trying to categorize states, and just visit places and take them for what they are.  Driving across endless seemingly identical corn fields in Indiana it becomes easy to lose sight of the fact that places are worth visiting because every place is unique, with a unique history, a unique geography, and a unique combination of influences that produces an experience different from other places.  The combination of rolling hills, bats, bourbon, and horses makes Kentucky a place like none other.

1 thought on “Louisville Slugger and the Bourbon Trail”