America’s most visited National Park is Great Smoky Mountains National Park.  Situated  in the Southern Appalachian Mountain Range, along the border of North Carolina and Tennessee, it is not the easiest place to get to.  When I think of National Parks, places like Yellowstone and the Grand Canyon first come to mind.  This is why I am somewhat surprised that this National Park takes the prize as most visited, with something like 10 million visitors annually. 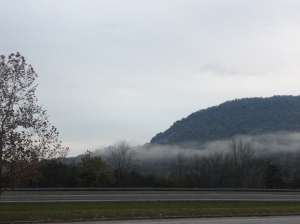 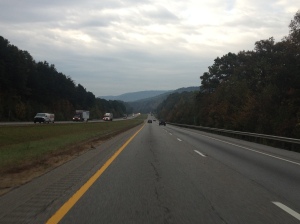 The drive down to the Smoky Mountains was quite scenic.  It was mostly along Interstate 75, which I joined just north of Richmond, Kentucky.  Mountains began to appear as I approached the border of Tennessee.  And, with it being a cold morning, fog appeared along the sides of the mountains near the border.  I have only driven this road once before, but I actually recall it being prone to fog.  I even remember fog related caution lights the last time I was here, which I did not see this time. 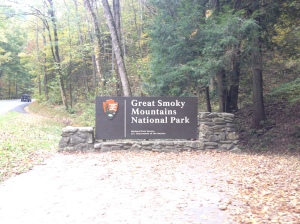 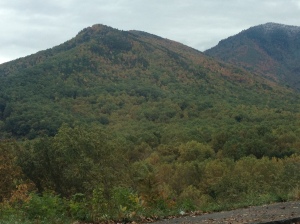 As I approached the National Park, I began to think that there may be places besides the National Park itself that are just as scenic.  I knew the park would be crowded, which it was, with slight backups on the way both in and out of the park.  I still wonder if I could have gotten the same experience at a slightly different location.  Most mountain ranges are larger than the parks that are built to celebrate them. 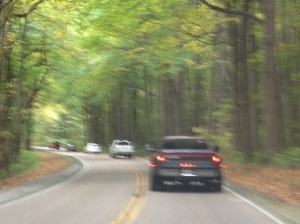 As I entered the park I notice that the trees in this area have largely not turned yet.  This, of course, is at lower elevations, and as I traveled up the mountains, the scenery would change.  This is one of the things that made this trip quite interesting. 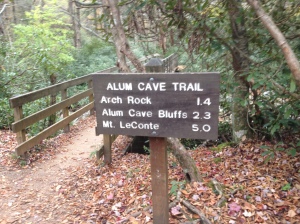 My Thursday hike would take me up the Alum Cave Trail to the top of Mount LeConte.  This trail is right in the middle of the park, and one of the most popular trails here.  It is kind of describes as your “quintessential Smoky Mountain hike”, and since this is my first time here, I figured I might as well start with this one. 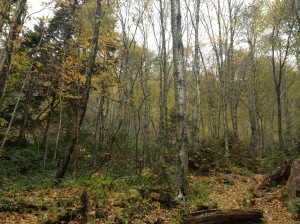 The hike starts off somewhat easy.  The first mile or so treks along the valley of a creek, gradually gaining elevation from a start of something like 3500 feet to just over 4000 feet.  It is in this part of the park, the middle elevations (as it has places lower than 2000, but also peaks above 6000) where the fall foliage was at it’s peak this week.  Knowing this, I would still recommend late October as an ideal time of year to visit the Smoky Mountains. 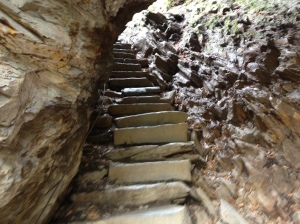 Arch Rock is the first defining feature on this trail, 1.4 miles in.  It is at this point that the trail becomes more difficult.  In fact, I think there are a lot of people that end their hike here. 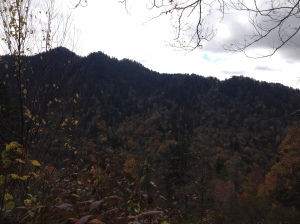 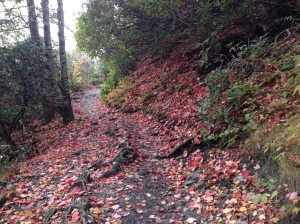 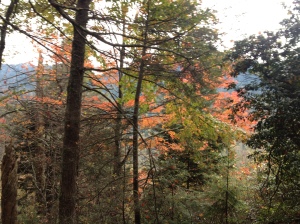 As I continue up the trail, I notice more great views of the mountains and the foliage.  The hike overall is somewhat difficult, but I would say I have done harder hikes in Colorado, especially due to the elevation.  However, I did get a chance to feel really awesome, as I was the fastest person on the trail that day.  I would spend most of the day passing people up, and only get passed up once, at the very end of my descent, right before reaching the car again.  This, of course, is the opposite of the experience that I typically have in Colorado, where I am the one usually getting passed up.  I should really not compare myself to others, especially regarding something like hiking, but it still felt kind of good, almost like I know what it feels like to be one of those guys with their headphones on running up Mt. Bierstadt. 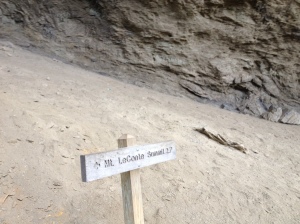 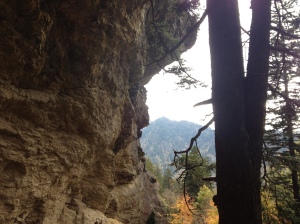 The trail’s main defining feature is Alum Cave, which is not a cave, but more of a series of bluffs.  This point is also a common stopping point for hikers.  It was a cold day, especially for Tennessee standards.  Highs would only get into the lower-middle 50s at the base of the mountain, and most of my hike would be in temperatures in the 30s and 40s.  A little nervous about the cold, I thought about stopping here, but decided to keep going anyways, up Mt. LeConte, which would take me over 6500 feet in elevation. 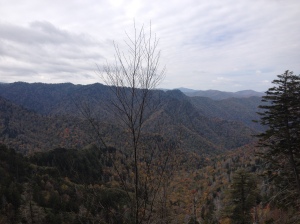 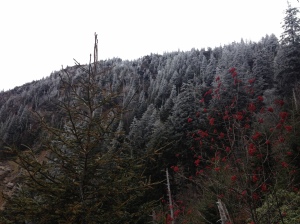 I had perviously noticed a white looking feature to the top part of the mountains.  One could mistake this feature for snow, but one of the hikers informed me that it was a really heavy frost.  This, of course, is something that would never happen in Colorado due to the lack of moisture, and is one of many features that make the Appalachian Mountains different from the Rocky Mountains.  When I finally got to this level, I was relieved to find that this frost was not present on the ground, which would have made the hike slippery. 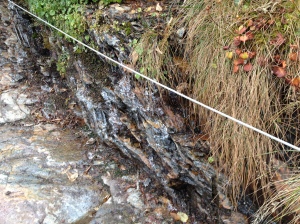 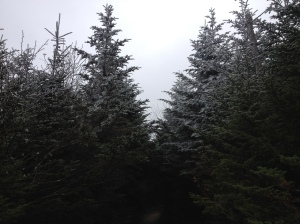 There were some really neat icicle formations near the side of the trail, but there were really only one or two parts I would consider slippery.  The top of the mountain did have some dense pine forests.  With their heavy coating of frost, walking in and out of these areas was somewhat creepy feeling- appropriate for Halloween.  There was some wind at the top of the mountain.  It was no faster than 10 mph, but was enough to blow some of this frost off the trees.  The frost flying through the air felt kind of like it was snowing, but being the scientist I am, I knew that it was not actually snowing. 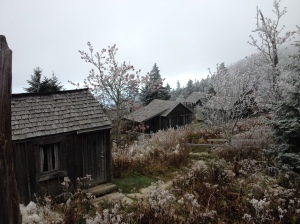 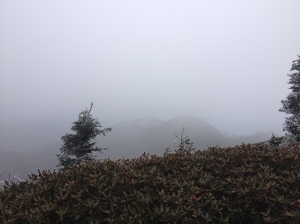 0.2 miles before the top of the mountain, there were a bunch of cabins.  I actually saw some people with full backpacks headed there to stay the night.  The top of the mountain was foggy, which dampened my view.  WIth it being cold and windy, I only stayed up there for about 10 minutes; long enough to take this picture and eat a 6″ sub from Subway, which I brought with me in my backpack. 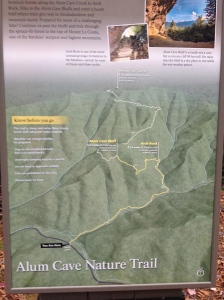 The hike took me about 5 hours overall, 3 to get up and 2 to get down.  Other hikers told me that it was an impressive time, but I was kind of in a hurry, as it was cold and I did not want to take long breaks.  The additional time gave me a chance to see some of the park’s other features. 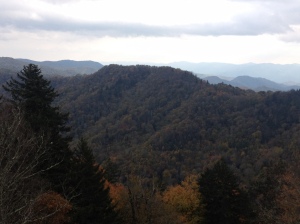 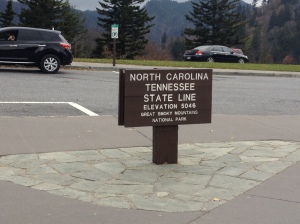 The first of such features was the Newfoundland Gap, which was apparently discovered in the early 19th century as an alternate route to the Cumberland Gap.  Looking out at the natural features, I struggle to figure out where this gap is, and what makes it an easy route for settlers to get across the Appalachians.  I am guessing it is the valley between this hills, but it seems as though they would still have to climb to the elevation I am sitting at, 5048 ft. 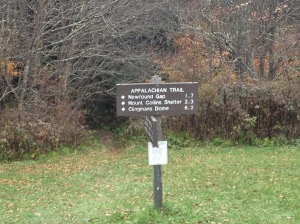 I also got to see a small section of the famed “Appalachian Trail”, which follows the high points along the NC/TN state-line through most of the park. 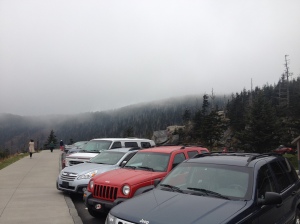 I drove up the road to Clingman’s Dome, the highest point in the park.  But, the cold, windy weather, and fog at the observation deck stopped me from actually going up there.

Overall, I enjoyed my experience at the Great Smoky Mountains National Park, and I think the area offers something for everyone.  Just outside the park are the towns of Gatlinberg and Pigeon Forge. 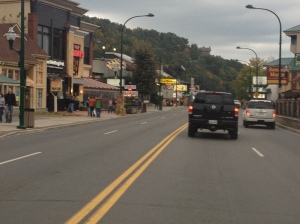 Both towns are quite touristy, with tons of restaurants, hotels, and other attractions like roller coasters and family fun centers.  However, Gatlinberg was more dense, the kind of place where one would largely walk to most of the places they desire to go to. 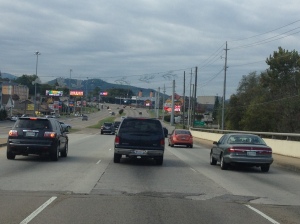 Pigeon Forge, on the other hand, is a driving place.  I saw few people walking around here (as I saw a lot in Gatlinberg), but there were still tons of attractions, probably even more than in Gatlinberg as Pigeon Forge is home to Dollywood.

For those that want a more rustic experience, there is plenty of that too.  In fact, just off the Smoky Mountain Parkway (the highway that connects these two towns to Interstate 40), it gets a lot more rustic quite quickly, with lots of cabin sites, but also areas with tubing and other outdoor activities.  I can imagine nearly everyone getting something out of their Smoky Mountain experience, and I can imagine spending a significant amount of time here.  Between this, my experience in Nashville last year, and what I hear about Memphis, Tennessee seems to me like a state that really knows how to party!

We urban, cosmopolitan, northerners (or however you describe pop-culture influenced mainstream America) seem to do a good job of taking cultural mainstays from other regions and turning them into short-lived fads.  Shortly after the Krispy Kreme fad (which was roughly 2001-2004), we created a fad out of Caribbean reggaton music, culminating with Daddy Yankee’s widely successful BarrioFino album.  For those that don’t know, Daddy Yankee is still producing albums that are widely successful in the Caribbean, and even moderated a gubernatorial debate in Puerto Rico.  We are now doing the same thing with twerking, which has been part of African American culture for two decades.  Actually, that fad may already be over!

After my breakfast, I head back to the park to visit one last destination; Cades Cove.  This part of the park is mainly for wildlife viewing.  I have limited luck, as much of the area is pretty empty.  There are a lot of horses here, but that is kind of what I expect.  I was amazed, though, at how people went right up to the wildlife, even if it was deer, something I see all the time.  At the other National Parks I have visited this year, mainly Yellowstone and Rocky Mountain National Park, anywhere I’d seen wildlife, there were park rangers making sure people don’t get too close.  Here, it appeared as if people were walking up to the animals, just daring them for a fight. 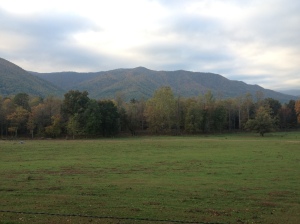 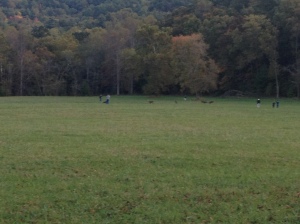 I would very much like to come back here.  There is so much more to see and do in Great Smoky Mountains National Park, as well a in Gatlinberg and Pigeon Forge.  However, I am also curious to go somewhere else in this mountain range where it may be less crowded.  Perhaps I could go somewhere like Mount Mitchell, or to an area north or south along the range, just to see if the foliage and hiking experience would be just a good without the traffic and crowds.  However, I do think it is interesting to see these mountain ranges in the east, as they are quite different from the Rocky Mountains, near where I live.  They have much more of a densely forested feel to them than the wide open Rockies.  The colors are different, and the mountains feel somewhat different in orientation.