I became interested in the weather at a young age, in part, because its impact on all of our lives is quite evident, almost every day.  While the weather has an impact on nearly all aspects of our lives, it has the greatest impact on many of the activities we take part in for enjoyment and fulfillment.  Activities such as hiking, playing on a friendly softball team, or having a family picnic in the park take place outdoors, and require a certain type of weather conditions, otherwise they are either not possible or not enjoyable.  For many, including me, activities like these make up an essential part of life, an essential part of feeling “alive”, and an essential part of the human experience.

The weather also behaves in a sort-of predictable but sort-of not predictable manner.  From sheer observation, we can recognize certain patterns in how the weather behaves.  But, there are always some surprises, some deviations, something to keep us on our toes.  If we always knew what exactly what weather conditions to expect, some aspects of life would be easier to plan, but the weather would be far less interesting.

In Colorado, each season presents a different set of considerations.  In winter, we watch the snowpack grow, as well as when and where storms that make travel perilous hit.  In spring, we watch as the snowpack melts and the runoff produces both rapids, and potential floods.   In the summer, an issue for some in places close to Denver, Fort Collins, Pueblo, etc. is the heat.  Mid-summer in particular can get quite hot in these locations, with most days reaching highs in excess of 90 degrees.  Those looking to avoid this heat can do one of two things; wake up early or travel to a higher elevation.

I needed a calmer weekend.  The summer had been active, and I still have to expend some energy in order to make a living.  I am not extremely lucky or extremely wealthy.  But, I am hardly one to sit inside all weekend in the middle of the summer. 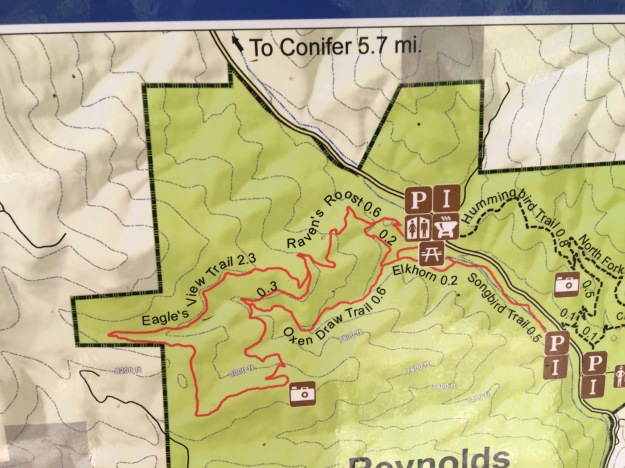 Luckily, there are places one can get to from Denver in roughly an hour, sometimes less, that offer moderate intensity hikes at a high enough elevation to escape some of summer’s heat.  One such place is Reynold’s Park, close to Conifer, where we were able to find a set of trails that offer a six-and-a-half-mile loop, with a vertical climb of just over 1000 feet.  This hike is described as “moderate” in difficulty (as opposed to the hanging lake trail, with a similar vertical climb that is described as “strenuous”), and I would certainly agree with the assessment.

We took the loop in the counterclockwise direction, using the Raven’s Roost Trail to connect to the Eagle’s Nest Trail.  I am actually glad we decided to take this loop in this direction.

We spent roughly an hour getting to the summit, and were fortunately enough to be shielded from the sun for part of the time, due to both sections of denser forest, and partial cloud cover that afternoon.

However, hiking the loop in this direction, we actually saved the best for last.  After “summiting”, there was a section of the hike that was generally flat, and also densely packed with pine trees.

I guess we “descended” a little bit, meaning 150 feet or so into the valley of a small creek.  When we popped out of that valley, we actually encountered the best view of all, as a clearer (from trees) section of the trail gave us clear views of some of the more interesting rock formations in the distance, including “cathedral rock” in the background of this photo.

As we descended, I thought to myself about how sometimes I do get disappointed when I do not “save the best for last”.  What a letdown it is indeed when the best part of any hike happens within the first 45 minutes!  In fact, every time I eat a meal there is always a battle going on in my head.  I genuinely want to save the best for last, meaning, saving my favorite parts of the meal for the end.  But, I also do not want to get full on the other stuff, and not have enough room for what I enjoy the most.  This is what makes collecting the proper food at Indian Lunch Buffets a particularly daunting task.  Anyone going to one should know their appetite.  In fact, I suggest only going when there is a robust appetite, particularly for those with FOMO (Fear Of Missing Out).

I’ve been trying to, of late, capture some better pictures of wildlife.  While I haven’t necessarily been out in search of it recently, I have been trying to keep my eyes out for it, as opposed to just looking for waterfalls, unique rock formations, summits and the like as I typically do.  The previous week, in Glenwood, I took this photograph of a chipmunk eating a little cracker (also posted in my previous entry).

At Reynolds Park, I got a chance to take this amazing close up photo of a butterfly in the parking lot after the hike. 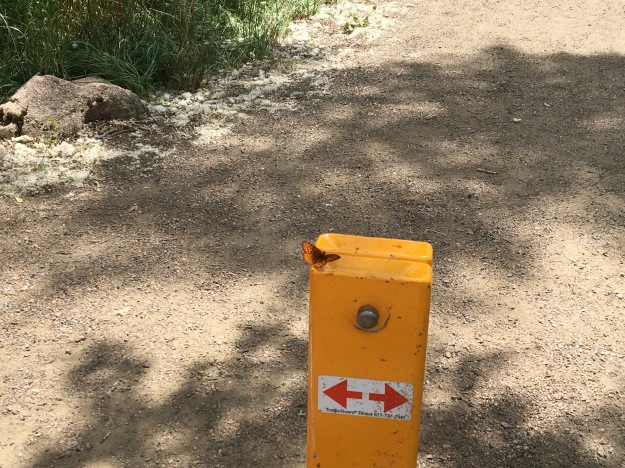 In fact, this particular butterfly chose to land on a yellow colored post and sit there with its wings out, color coding herself in a manner that almost felt like it was purposeful, as if the butterfly somehow thought there was a possibility it would get famous from this photo; possibly ending up as the July photo in a 2017 Butterflies of Colorado calendar that people will see at the mall, or at Barnes and Noble. 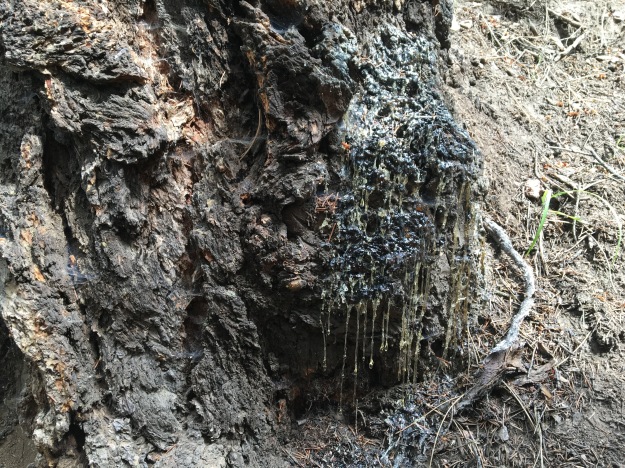 Add to that the craziest sap discharge I have ever seen (okay, trees really aren’t wild but you get the picture), and, well I was pretty successful in trying to expand my photo-taking to new horizons.

In a divine sort of sense, sometimes I wonder if one of the reasons for changes in seasons, changes in weather patterns and such is to ensure that people are forced to go to different places, try different things, and have some kind of a variety in their lives and activities.  It is easy to do the same thing over and over again, but it is also the least satisfying way to live.  But, sometimes we need a push.  Whether that be some sort of tough situation at work, an unwelcome new presence in our community, a terrible breakup or anything else, sometimes the silver lining in all of it is getting involved in something new, something more satisfying than what was before.  While 95 degree temperatures and exhaustion are certainly less extreme than any of these situations, I know it helps push people towards variety and is giving at least some other people a chance to select a more moderate activity while taking time to appreciate nature, have a nice chat with friends, or, in my case, both.