When people think of the American West, certain images often come to mind:  the unique natural features of Yellowstone.  Iconic mountains that tower over the nearby landscape, such Rainier and Hood.  The canyons that carve through the American Southwest, creating popular destinations such as the Grand Canyon.

The Grand Canyon is not the only canyon of the American West.  In fact, it is not the only canyon carved out by the Colorado River, the continent’s fifth longest running river.  The river, has its source at Rocky Mountain National Park and snakes through the west carving out  numerous canyons.  In fact, there are some that believe that the canyon in Southern Utah that was flooded when Glen Canyon Dam was built, a couple of hundred miles upstream of the Grand Canyon, was even more scenic than the Grand Canyon itself (some are even looking to remove the dam despite the Wests water needs).

An overly simplified model of Colorado’s geography, is that of the three flavored boxes Neapolitan Ice Cream.  Colorado’s three sections are the Plains, the Central Rockies, and a region generally referred to as the Western Slope.  While the Western Slope is officially defined as anywhere west of the Continental Divide, culturally, we tend to think of it as west of Ski Country, which also happens to coincide with where canyon country begins.

On the above map, the two yellow stars are Denver, where the Plains end and the Central Rockies begin, and Glenwood Springs, where, traveling west the terrain transitions from tall peaks to canyons, mesas, and plateaus.

The official reason for the trip to Glenwood this year was whitewater rafting, a group trip that I organize every year, with a different destination each time.

This year, the trip was a little bit later in the season, early July, rather than mid-June.  The later date allowed more of the mountain snowpack to melt, particularly this year, as the period around the fourth of July was quite hot across the state.  As a result, the rapids were not nearly as intense as the previous two years.  However, the trip was not without its moments.  This time, everybody stayed in the raft!

As was the case last year and the year prior (this is the third year of my annual trip), we camped.  We selected a somewhat peculiar place to camp this year, on top of the White River Plateau north of town.

To get to the Plateau, we had to follow a road called Coffee Pot Road, a bumpy road that rose up out of the Colorado River Valley below us and onto the plateau several thousand feet above it.

Here is where I fully came to the realization that I was on the border of two of Colorado’s “stripes”.  Looking east from the campground, in clear view are the tallest peaks of the Central Rockies, the Sawatch Range, which includes Mount Evans, Colorado’s tallest peak. 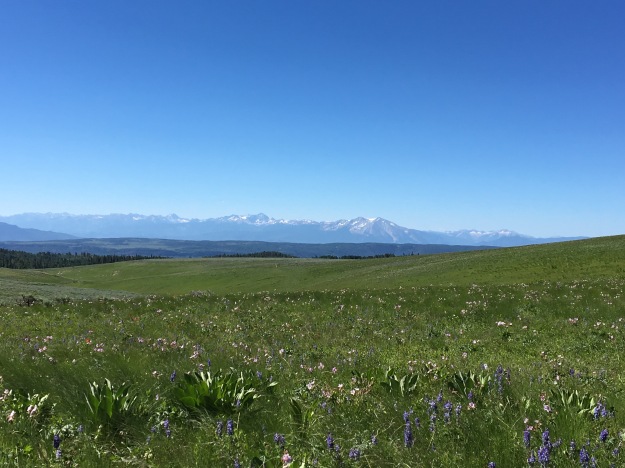 A mere mile to the west of our campsite sits Deep Creek Canyon.  I had no idea this canyon existed.  Deep Creek is a tiny creek, carrying very little water at the time we saw it.  Yet, it manages to carve a 2100 foot deep crevice in the landscape in a manner similar to Black Canyon and other Western Canyons. 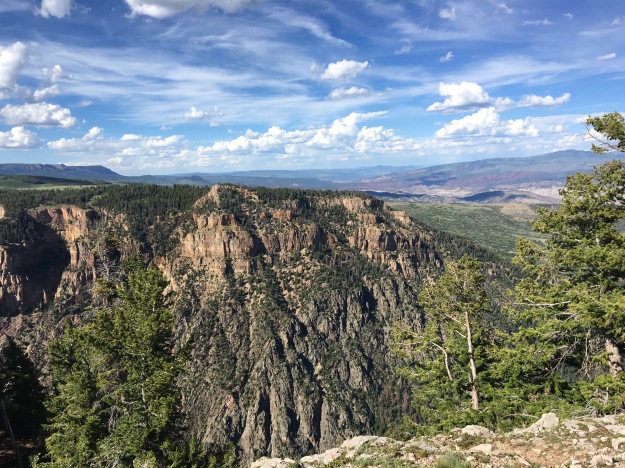 What really made this feel like a peculiar place to camp was the range of temperatures we would experience over the course of the weekend.  We spent the middle part of the day in the valley, first rafting in the Colorado River than in town, all at elevations below 6000 feet.  Daytime temperatures soared well into the 90s!  At night, we returned to our campground, above 10,000 feet in elevation, where nighttime temperatures fell into the upper 40s.  If one were looking to experience comfortable temperatures, it would make sense to do the exact opposite, spending the daytime hours at higher elevations where it is cooler and then returning to the valley at night.

The town of Glenwood Springs is a touristy town.  Everyone around, from the rafting instructors to the bus drivers describe it as such.  However, it is touristy in a different way than some other places I’ve visited.  I didn’t see 50 ice cream shops like I do in South Haven, MI.  I did not see anything like Ripley’s Believe it Not or the other places I see at the Wisconsin Dells.  And, I certainly didn’t see 150 T-shirt shops as I do when I visit Cooperstown.  It seemed like more bars and restaurants than anything else here.  And, of course, one of Glenwood’s other main draws, the hot springs.

Maybe Glenwood’s tourism industry is simply trying to accommodate a different mix of people than those other places, or maybe they are simply trying to stay true to their own unique identity.  After all, there are a lot of activities in the area, and a lot of reasons for people to visit.

Just east of town, is the area known as Glenwood Canyon.  Due to the narrowness of this valley, there are sections of I-70 where the speed limit drops to 50 miles per hour, the westbound lanes are stacked on top of the eastbound lanes, and parts of the highway are tunneled underneath rock that goes right up to the River.

It is in this canyon, several miles east of town, where Glenwood’s signature hike, Hanging Lake Trail draws so many tourists, that the parking lot is commonly full.  In fact, both Friday and Saturday, highway signage indicated that this lot was full anytime we drove by it.  We were able to get parking spots in the later part of the afternoon, around half past four, after the rafting trip, and lunch in town. 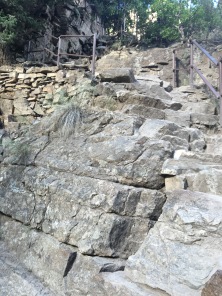 Hanging Lake is a short but challenging trail.  Only 1.2 miles long, it climbs 1200 feet in elevation.  This, both made sense and surprised me at the same time.  Being in a canyon, I knew that any hike in the area would be steep, and this one sure had its steep parts.  What surprised me was, how far up the canyon hanging lake is.

I had seen pictures of this lake before, and knew the trail was short, I just pictured it being much shorter and much closer to the bottom of the canyon.

The trail was crowded, which should not be surprising, given that the parking lot was still almost completely full when we arrived.  What surprised me was the ethnic diversity of the crowd hiking this trail.  On the way up to hanging lake, which probably took a little over 30 minutes, I heard people speaking all sorts of different languages!  I enjoyed seeing so many different kinds of people enjoying scenery, nature, and, as I speculate, a weekend away from it all.

There is only one area attraction I did not get to, the Glenwood Caverns Adventure Park.  It’s hard to get to everything on a short weekend trip.  I guess there is still a lot more for me to see here in Glenwood, where Westbound travelers leave the high peaks of the Central Rockies and enter the land of deep canyons. 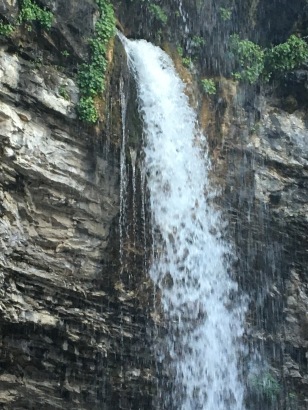