June is a month with tons of opportunities, if for no other reason than the amount of daylight many places in the Northern Hemisphere receive. The long days and late sunsets make a lot of activities possible for people who work traditional hours. It is only in and around this time of year that those working “normal working hours” (I want to make clear that I in no way advocate traditional working hours), have enough daylight for hikes, as we’ll as many other outdoor activities, on weekdays after work.

Royal Arch is a fairly strenuous three and a half mile (round trip) hike that originates at Chautauqua Park in Boulder, Colorado. Located at the Southwest edge of town, these trails are very popular, and Chautauqua Park can be quite busy at certain times of year. Although a high number of people reach this trailhead by bike or on foot (this is Boulder after all), parking is quite limited. One should not expect to find a parking spot in the lot by the trailhead any time conditions are ideal for hiking. This includes both weekend days, as well as on weeknights like this one.

For a unique experience, I arrived at the trailhead at roughly 6:45 P.M. This is later than I would recommend arriving for anyone that desires to hike this trail at a moderate pace and finish before it gets dark, even at this time of year.

At this time of the evening, shortly after starting the hike, the sun had already descended behind the mountains to the west. Alpenglow could still be seen, hitting the top of the long flat diagonal rocks that are often referred to as the “Flatirons”. 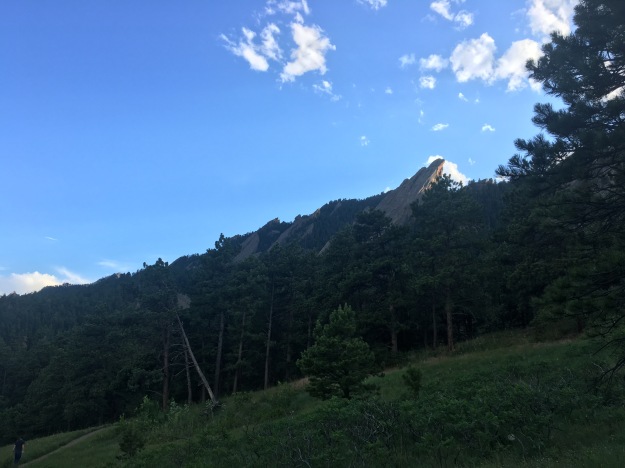 Hiking mainly after 7 P.M. also put most of the hike in the shade, as the sun was already behind the mountain peaks to the west. This made the hike more comfortable, as the temperature was in the upper 80s, a normal level for this time of year, before the hike.

Most of the trail is fairly strenuous, with a consistent climb. This changes at Sentinel Pass, which is within about a half a mile of the end of the trail.

Many hikes are said to have “false summits”; places where the trail appears to be reaching a summit, which is usually the final destination of a hike. Sentinel Pass, in a way, is both a false summit and a real summit.

It is actually a summit! However, it is not the end of the trail. The trail continues. There is a short but steep descent right after Sentinel Pass. The descent is followed by another steep uphill section, where, after another 15 minutes or so of hiking, Royal Arch is reached. 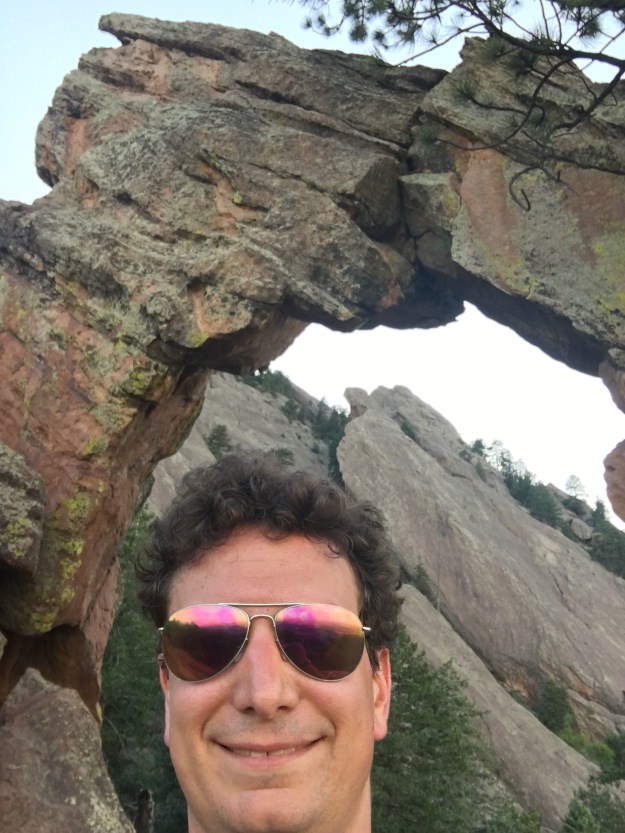 It ended up taking me just under an hour to reach Royal Arch. For a hike of 1.7 miles with 1600’ of net vertical, and some areas that are quite strenuous, this is a relatively quick pace.

After resting and enjoying the view for a mere 10 minutes at the top, I was still barely able to make it back down to the trailhead before darkness fell upon the area. 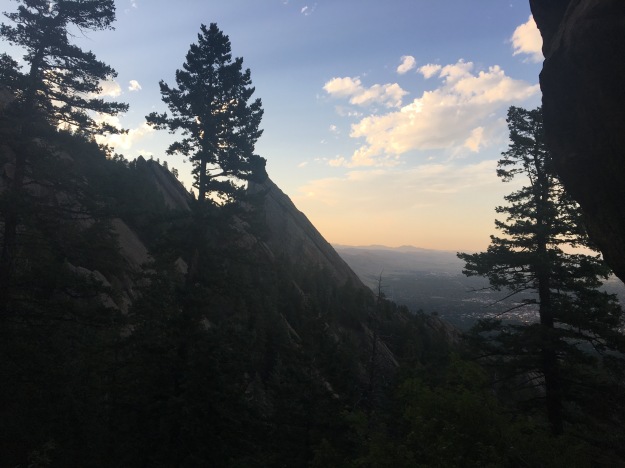 This is why I would recommend for most people to either arrive earlier (which shouldn’t be an issue for most work schedules), or bring a headlamp. Even in the week following the summer solstice, with some of the latest sunsets of the year, there are limitations to what can be done after working a typical 9-to-5-ish day.

One of life’s major challenges is making the most of whatever opportunities come our way. June, and its lengthy days, represents an opportunity to simply get outside more and get more exposure to sunshine.

For a variety of reasons it appears that the modern digital, sedentary lifestyle is taking its toll on us. It feels as if every five to ten years, some new set of dietary recommendations come out. Either a new set of foods become the secret, magic ticket to a healthier life. Or, some different type of food suddenly becomes the new “boogeyman”, and is suddenly to blame for all these widespread health problems.

I am not a health expert. However, based on my observations and reasoning, it appears that many of our health problems are related to two things; many people being way too sedentary, and, primarily in the United States, some ridiculous portion sizes. There also appears to be some merit behind staying hydrated and getting enough sleep.

Our bodies were meant to move. It’s been shown that sitting for even a couple of hours at a time can actually lead to negative health impacts, including the supply of oxygen being cut off from our brains. The predominant form of employment in 2017 is still 7-10 hours per day sitting in front of a computer. This cannot possibly be good for our minds or our bodies.

There has also been countless articles published recently regarding the connection between happiness and exposure to sunshine. Not only were we not meant to spend well over half of our waking hours seated, we also were not meant to spend nearly as much time indoors.

In our current culture, it is really hard to avoid having to perform a lot of work that requires being seated in front of a computer. Heck, writing this, I am, in fact, seated in front of a computer. This does not mean we cannot seek out and take advantage of opportunities, whenever we can, to be outdoors, be in motion,  and/ or be social (separate topic), as much as we can. 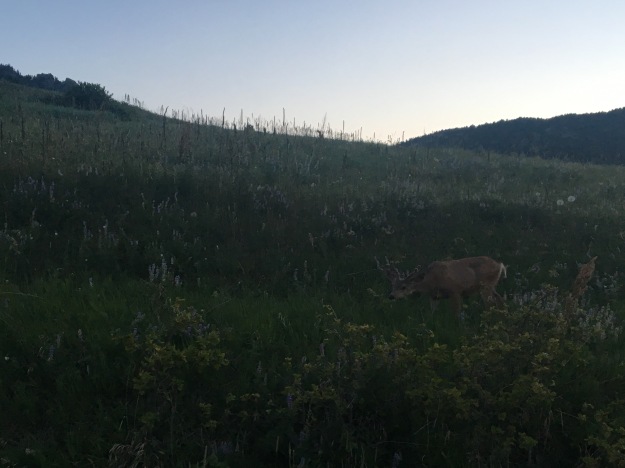 On the descent, I spent half the time talking to random people. The other half, I was lost in my own thoughts. I imagined myself in various scenarios, settings I could see myself in, places I would be, people I would talk to, etc. All the scenarios I imagined involved me encouraging others. I encouraged others to believe in themselves, to have confidence, to stand up to naysayers, and to make the most of their lives. Part of that involves taking part in activities that enrich our lives. So, I encourage everyone to take advantage of summer, particularly this first part of summer, and the opportunities it affords us by checking out places like Royal Arch for evening hikes.