At 7:30 A.M. on January 22, 1943, the temperature in Spearfish, South Dakota was -4ºF. A mere two minutes later, the temperature had suddenly jumped to +45ºF, a swing of nearly 50 degrees in a manner of two minutes. The Great Plains is known to be a region with extremely volatile weather. However, with respect to volatility on this short of a time scale, this one event is still in the record books.

75 years later, locals, as well as those interested in weather, still talk about the event. In fact, the event is mentioned in the Wikipedia entry on Spearfish.

But, why so much volatility? Why here? The answer to that question lays in the geography of the region.

Spearfish sits just north of the region known as the Black Hills. The Black Hills, although detached from the Rocky Mountains, are actually quite mountainous, with peaks rising several thousand feet above the river valleys. The manner in which peaks rise up in either direction while rock formations are carved out by small creeks is quite reminiscent of the Rockies. 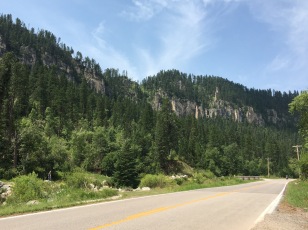 Just over the border, in Northeastern Wyoming, Buttes of varying colors pop out of the more open, but still hilly landscape. 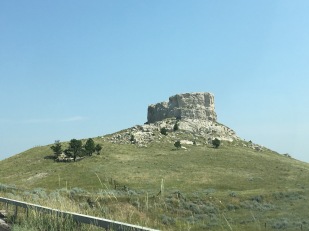 Only ten miles south of Spearfish is one of what feels like 500 different waterfalls that goes by the name “Bridal Veil Falls“.

It is, nonetheless, breathtaking, but, what is it about this name? Did the wedding industry  somehow collaborate with the outdoor industry to try to convince tourists looking at waterfalls to be thinking about fancy weddings through this common nomenclature? Was there an early 20th Century conversation that went something like this…

“Okay, we’ll name every other waterfall ‘Bridal Veil Falls’. In exchange, you will encourage every newlywed couple to take something referred to as a ‘honeymoon’.”

“A vacation that everyone is expected to take right after getting married. Think about it, both of our industries can make a ton of money off of this. We’ll get people thinking about getting married and specifically doing so with a fancy dress, likely to cost a lot of money, and then you make sure that when they wed, they are spending money on another vacation.”

Okay, maybe it was not exactly like that, but it does seem pecular.

As far as Spearfish is concerned, traveling in the other direction, North, from town, could not be a more opposite experience.

It is the Great Plains, and specifically the Dakotas, the way most people picture it.

It is this contrast, and specifically the North-South orientation of this contrast, in Spearfish that created this record breaking temperature change. When air travels from high elevation to low elevation, it warms. It is this exact reason that Denver, Colorado, just east of the Rocky Mountains, has frequent warm spells in the middle of the winter. In fact, January 16th is the only calendar date in which Denver’s record high is lower than 65ºF (it’s 64).

With the flat, wide-open, treeless land to the North, it could not be easier for bitter cold air straight from the North Pole to reach Spearfish. However, when warmer air does come from the South, it is further warmed by its trip over the Black Hills.

But, why all the fuss about setting records? Specifically, why do people care so much about bizarre records? In 1943, the news about the wild temperature swings in Spearfish provided a war-weary American public with some lighter news. And while the impact was only a bunch of broken windows, people can learn from these records.

The wild temperature ride in Spearfish demonstrates how the atmosphere works. Is there something similar to be learned by the man who broke 46 toilet seats with his head in one minute? Do people who have watched that video avoid breaking their own toilet seat at home?

Or, is there something other than intellectual curiosity at work? Records like this one are interesting to people regardless of whether or not they care about the ins-and-outs of how the atmosphere works. They are just entertaining. They also provide people with one of the main things we are all searching for in the modern world; significance.

The people of Spearfish can always bring up this wild temperature swing as something that makes their town stand out among all of the towns of roughly 10,000 people out there. It is the same for the man who bloodied his head breaking toilet seats, or that one person in everyone’s social circle that did something bizarre, like stop at every Arby’s between Chicago and Saint Louis (there are 13). They have this way of making the world just a bit more interesting.