In my childhood, I never knew what to think of North Dakota. Like most people living in metropolitan areas, I never gave the place much thought. I do recall hearing, at some point in the late 1990s, that North Dakota was the least visited state in the country. However, a more recently published list indicates that the state sees far more visitors now due to the recent oil boom. Apparently, Alaska, the hardest state to get to, is now the least visited state in the country, which makes sense.

My ideas about North Dakota were just kind of hazy. I’d wonder if the culture was just like that South Dakota and Nebraska. Or, if the proximity to Minnesota or Canada made it kind of different. 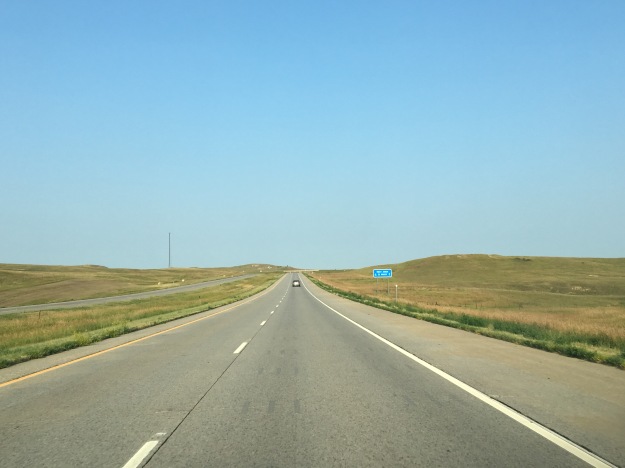 A drive across North Dakota along Interstate 94 will confirm what most people think. It is a Great Plains State with a Great Plains feel. If anything, there are even less trees and fewer towns than the rest of the Great Plains.

However, there are some surprising encounters, with both natural beauty and history to be found, without going more than a mile off the Interstate.

One of the most amazing parts of Theodore Roosevelt National Park, the Painted Canyon,  can be viewed just by going to a rest stop right off the highway.

This is pretty amazing, considering that adjacent to the park in all directions is nothing but endless wide open prairie.

Theodore Roosevelt National Park’s significance to the history of the west is, as expected, related to the president the park was named after. Theodore Roosevelt first encountered this land on a train trip to Montana. He fell in love with the wide open spaces, colorful valley, and quiet seclusion the area offered. He would later buy a ranch here, and it is said that experiences like these influenced the conservationist policies he would pursue as president, including a major expansion of the National Park System.

Halfway across the State, I encountered another scenic area, or, at least the sign indicated it as such. 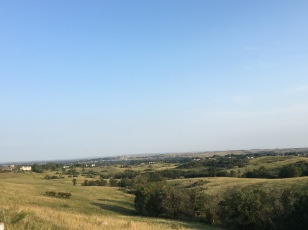 In both North and South Dakota, the Missouri River Valley, and the surrounding bluffs provide some variance in what is otherwise a fairly homogenous drive.

It was here in Bismarck I encountered a sizable North Dakota town, as well as a State Capitol building with a very unique shape.

I was not sure how to feel. As I prepared to interact with people, my mind wandered to every pre-concieved notion I had about North Dakota. I wondered what people here do on a day-to-day basis. I wondered if, despite the fact that it was only the second day of August, people who live here are already dreading the winter to come.

I overheard some conversations from people who sounded like they were locals. What I heard was not complaints about excessive boredom, fear about a sub-zero temperatures four months in the future, or some foreign sounding discussion about fracking I cannot follow. I heard people with a lot of the same concerns I often have: How to help that one friend or family member going through some hard times. People’s concerns over changes being made at their workplace. Health concerns and other day-to-day topics that are common amongst almost all the people of all the world.

I thought to myself “Have I become this disconnected from really?” Do I now struggle to relate to people when they aren’t discussing some major global issue, an invention at a setting like start-up week or some grand adventure?

Even in the most innovative cities in the world, more people would prefer to discuss their day than a diagram like this one.

It would be easy for anyone to say that, right now, North Dakota’s only really significance is in the world of energy production. However, that would be ignorant to history. For, if it weren’t for Lewis and Clark meeting a friendly tribe to camp with for the winter (Fort Mandan), and get the help they needed from Sakakawea, it may have taken several more decades for the West to be opened up. And, if it weren’t for a young future president finding picturesque Badlands he desperately wanted to preserve, the National Park system, which has a much larger presence in the West than the East, could look significantly different than it does right now.

What occurred to me as I continued Eastward from Bismarck was that, whether the number of annual visitors is closer to 2 or 20 Million, most North Dakotans probably do not care about the relatively small number of annual visitors. It reminds me of some of the people I interact with in Colorado that were born there decades ago. Many of them actually did not want this gigantic influx of people and visitors that fundamentally transformed the state. Many of them just wanted to enjoy their state the way it was, and that is what North Dakotans get to do.