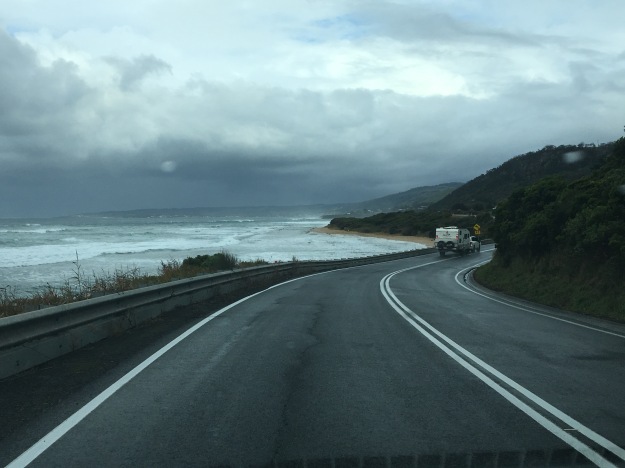 Just like that the weather turned. A couple of hours after the sun went down After our first day on the Great Ocean Road, the wind started howling and the rain started falling. It was weird to be on top of a van while a storm was coming through. At first I was scared that the van would tip over, but I reminded myself of the amount of wind needed to actually do that, at least 85 miles per hour (135 km/hour). As much as I lament the amount of places in the world, particularly at work, where emotions are expected to ignored, it is still great to overcome an irrational fear with knowledge and logic.

I was surprised to awaken and find that I had slept in, until about 8:30 A.M. Given how early I had gone to sleep, due to the sun setting at 5:10 P.M., this meant that I had slept nearly 11 hours! While I had hoped to get an earlier start that day, I could not believe how refreshed I felt. Lately it feels like there are multiple competing theories about sleep, in particular related to whether or not lost sleep can be made up for. Based on my experiences, it feels like it can. The experience reminded me of coming home from college and immediately sleeping 12 hours at my parents house after stressing out about finals and final projects for weeks (as well as living in the dorms). After sleeping 11 hours, for the first time in what feels like years, I did not feel any sleepiness or need for caffeine! 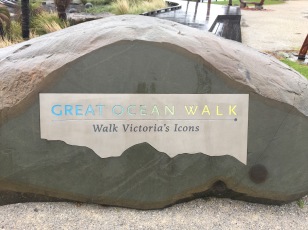 No matter how much people plan, changes in weather create the need for some adjustments. The wind and rain made it feel not exactly pleasant outside. The beaches, as well as some of the walking trails, were empty that day. The town of Apollo Bay is bigger than Torquay and Lorne, and where the Great Ocean Walk, a 104 km trail that leads to the Twelve Apostles, begins.

About 3 km West of Apollo Bay, is the first place along the Great Ocean Road, nearly halfway through the drive, deviates from the coastline.

Even here, the ocean is still always kind of in sight, but the inland traverse into the hills provides some variety in the scenery.

It is this section of the coast, near Cape Otway, conditions felt at their windiest. Sort of like a peninsula jutting out into the Southern Ocean, the area is often referred to as “shipwreck coast”. 19th Century historical events here include a number of documented shipwrecks, but also the construction of the Cape Otway Lighthouse, Australia’s oldest. This lighthouse established the first connection between mainland Australia and the island of Tasmania, via both shipping routes and telegraph messages.

In the afternoon the rain stopped, but the wind continued to howl. The sun even gradually started to return. However, the cold wind straight off the coast would still make it a less than pleasant day for any kind of long walks or hikes. It ended up, however, becoming the perfect conditions for a once in a lifetime experience. A helicopter ride over one of Australia’s most iconic destinations; The Twelve Apostles.

At AUS $145 ($110 US) per person, the cost of this epic journey is quite reasonable! The ride itself lasts about 15 minutes, and quickly soars over some iconic images, including The Great Ocean Road.

Of course, the Twelve Apostles. 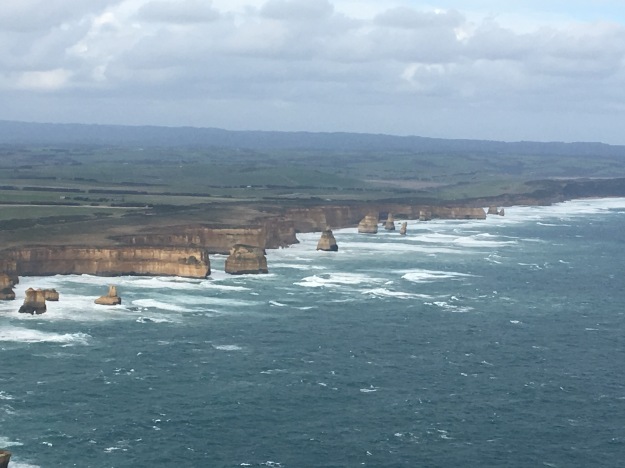 And, many of the similar limestone structures further West. 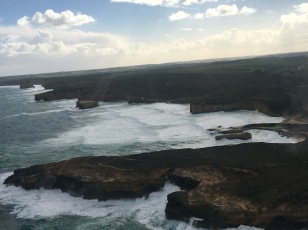 While the helicopter ride provided an arial view of these beautiful oceanside structures, the Gibson Steps, located just a couple of kilometers to the East of the Twelve Apostles, provides a view at beach level.

The Gibson Steps are exactly what one would expect, a staircase that leads down from the overlooking cliffs to the beach. Walking down and up the steps requires being outside for only about 10 minutes, so the less than pleasant weather was not too much of a factor. 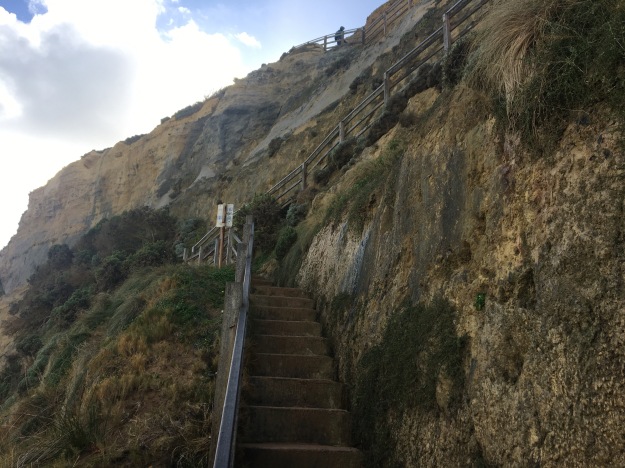 We camped that evening in Port Campbell, a town of barely 600 permanent full time residents with a beautiful beachfront. In the summer, this place is a lot more crowded. In the winter, it was quite empty. 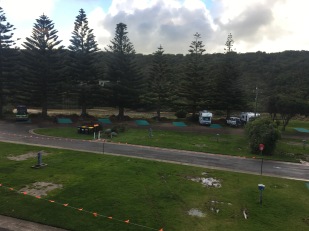 This was the evening that having traveled to the Southern Hemisphere in June messed with my mind the most. Port Campbell in winter has a clasic quiet small town feel. The Main Street bar with a faded neon light outside it. The three block stretch of lit roads surrounded by darkness in all directions. The quiet street with a few people walking around but most inside the restaurants or their own homes.

We are accustomed to the relatively gradual changes in daylight patterns as the seasons progress. Even in periods like April and October, the amount of daylight, at most changes by a couple of minutes each day. Having experienced the daylight expansion in the Northern Hemisphere from April to June, I’d inured to sunset being sometime around 8 P.M. and complete darkness onsetting closer to 9. Being in complete darkness in a quiet small town made 6:30 P.M. feel almost like 10. Without seeing too many people out and about, it is easy to feel like we had arrived at everyone’s bad time.