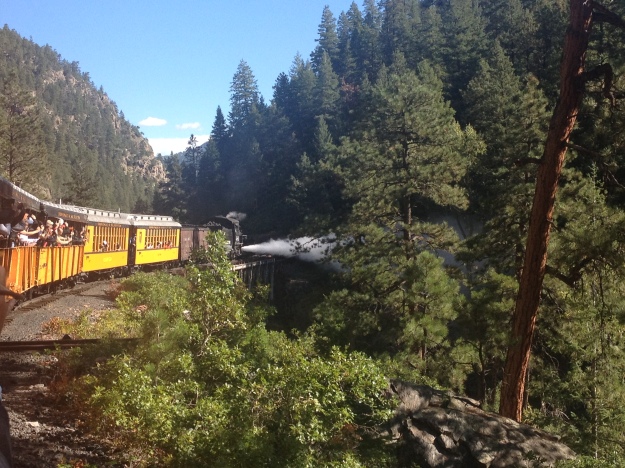 One hundred years ago, most of us traveled on steam engine trains.  The proliferation of railroads across the continent during the 19th Century revolutionized how we got around, and connected us in ways we had never been before.  At the start of the 19th century, it took Lewis and Clark multiple years to get from one end of the continent to the other.  By the end of the 19th Century, that trip could be made in only one week by train.

During the 20th Century, more and more people were able to afford automobiles and flights.  Many of the train lines across the country went away as people switched transportation methods.  Those that remain have long since converted to more modern technologies; diesel or electric, and are primarily used for commutes between cities and/or suburbs at times of high traffic volume.

There are a few places where one can still ride a steam train, exactly how we used to ride in the late 19th and early 20th centuries.  One of those places is in the San Juan Mountains of Southwestern Colorado, where a Narrow Gauge Railway offers daily trips between Durango and Silverton, primarily for tourism purposes. 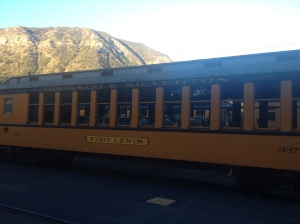 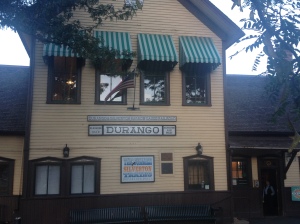 The train schedule is set for tourists to ride the train from Durango north to Silverton in the morning, and then return in the afternoon.  There are three departure time options, the earliest of which (and the one we took) departs at 8 A.M. 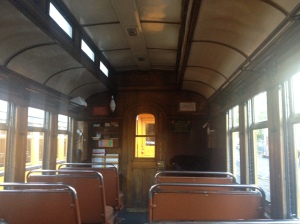 Part of the novelty of taking a train ride like this is how authentic the ride is, including the inside of the train.  Today, we are accustomed to traveling with a higher level of comfort than this.  But, the inside of this train definitely had the same exact feeling as one would have experienced one hundred years ago, making the experience as authentic as one can get.

This particular train route, from Durango to Silverton, follows alongside the Animas River the entire length of it’s 45.2 mile route.  The breathtaking scenery in which this train traverses makes the train ride appeal to many different kinds of tourists, as opposed to just train enthusiasts. 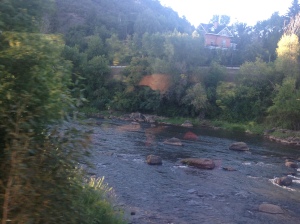 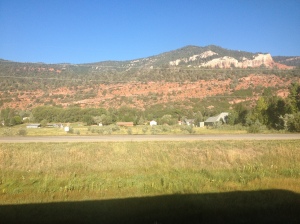 The train leaves Durango, at 6512′ above sea level, and begins it’s climb quite slowly, through a wide open river valley. 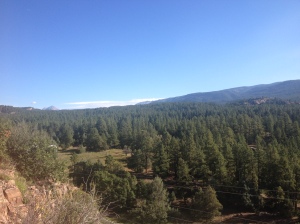 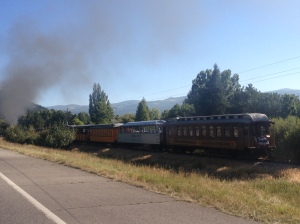 For the first section of the trip, the train follows the same path as the highway. 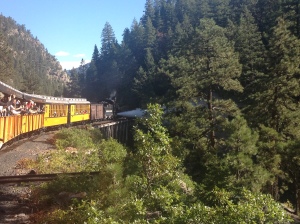 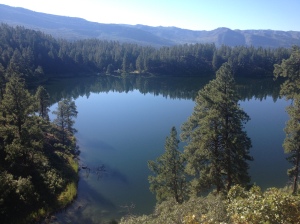 Some 15 or 20 miles into the trip, the train deviates paths from the highway, at a large lake called Electra Lake.  This is where the scenery really becomes quite unique and breathtaking. 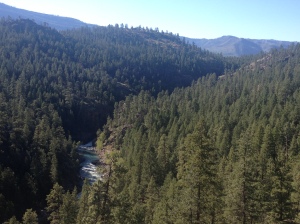 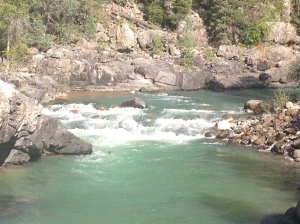 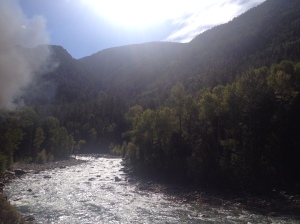 The river valley becomes much more narrow as it meanders through the Needle Mountains.  The narrowness of the valley is the reason the train is “Narrow Gague”, and also the reason that roads could not be built to follow the river valley. 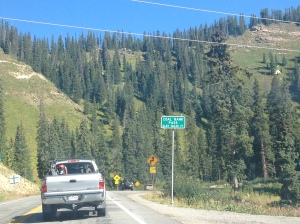 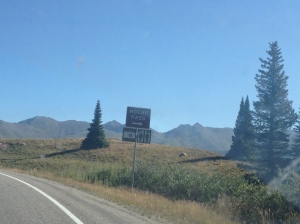 The route along “Million Dollar Highway” is also considered very scenic, but in a different way.  In fact, this highway is also a popular bicycle route, and even the venue of an annual bicycle race.  I would definitely recommend experiencing the journey from Durango to Silverton in both the old fashioned (steam train), and the modern (by car or with a nice road bike) way if time permits, as each set of views are great in a distinct way. 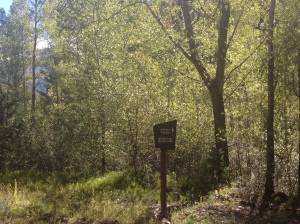 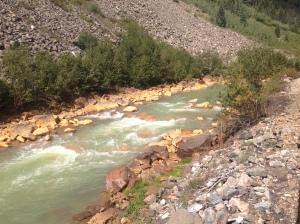 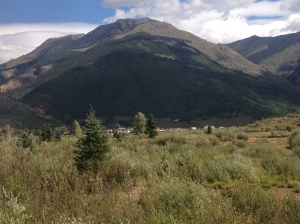 The train completes it’s journey into town in the heart of the Needle Mountains, where the gradual change in the color of the rocks surrounding the river reminds riders of the town’s history as a destination for miners. 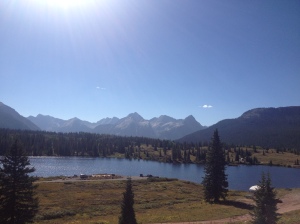 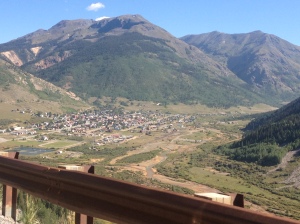 Along Million Dollar Highway, motorists and cyclists view the Needle Mountains from both a higher elevation and a little bit of a distance, seeing them in their entirety.  This is followed by a descent that first winds around Molas Lake, and then provides an aerial view of the town. 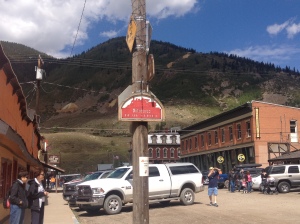 Silverton is quite the unique place as well.  As soon as I stepped off the train, I felt as if I had entered the Old West.  In fact, I have never felt more genuinely in the Old West in an operational town (as opposed to a restoration like South Park City) as I did in Silverton. 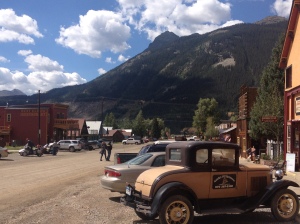 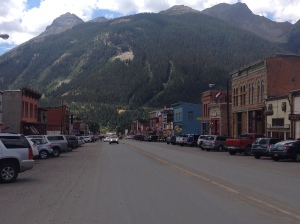 With the exception of Main Street, Silverton’s roads remain unpaved.  Many of the storefronts are still reminiscent of Old West businesses, in design and font, and there are even a few cars that resemble those produced in the early days of the automobile’s availability.

We at a restaurant called Grumpy’s Saloon, right in the heart of town.  This restaurant also felt like an Old West recreation.  Between the wall decorations, the waitresses dressed clothing that seemed like it came right out a film like Maverick, and an old man playing tunes on the piano, it actually felt as if they were trying too hard. 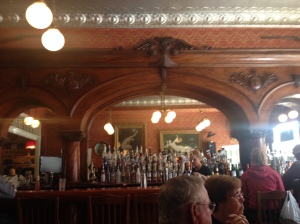 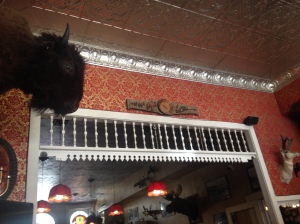 The only real drawback to taking the Durango-Silverton Narrow Gague Railway is the length of time the trip takes.  A trip of only 45.2 miles actually takes close to three and a half hours each way. By contrast, the trip by car took roughly and hour.  And, while it may take around the same amount of time for a cyclist like me to get from Durango to Silverton, the mainly downhill return trip could likely be done in around two hours.

I guess, like all other aspects of this trip, the travel time is also true to the exact way it was one hundred years ago.  While it was great to get the real experience, the return trip did start to drag on a bit, particularly when the train entered the less exciting scenery in the later part of the return trip to Durango.  My advice would be to either pay the extra money to ride the bus on the return trip, or to bring a book or magazine for the last 60-90 minutes of this trip. 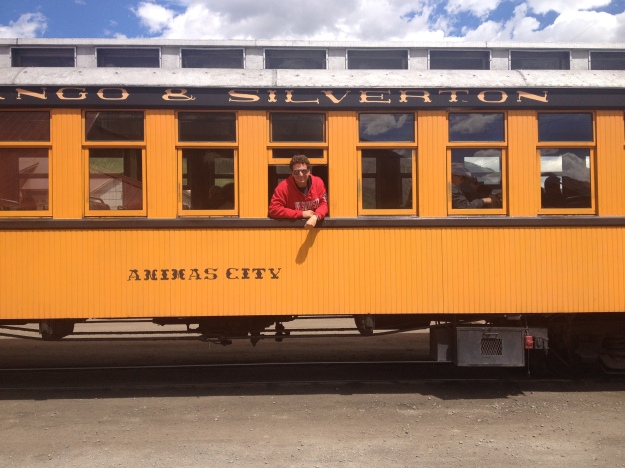