Mount Harney is the tallest peak in South Dakota. In fact, it is the tallest peak anywhere east of the Rocky Mountains. The guy at the Custer State Park visitors center actually said it was the “Tallest peak between the Rockies and the Alps”. While that is technically true, it is a bit of a stretch. At 7242 ft., it is taller than anything in Appalachia, including the tallest peaks in the Smoky Mountains, but not really by too much. The difference is less than 1000 ft., and is probably made up for by the fact that the bases of those mountains are at lower levels.

However, it was still a really good hike. In fact, it kind of reminded me of hiking near Boulder a bit. It is at similar elevations, a similar total climb, and there are some major rock formations here too. Our loop from Sylvan Lake up to Harney Peak and around by two other major features; Little Devil’s Tower, and the Cathedral Spires, took us a bit over 8 miles today. With what is probably close to 2000 ft. of vertical climbing, between the main climb and a couple of side climbs, it was a very satisfying hike. With this morning’s drive taking us by the ” Needles Eye”, we have actually seen nearly half of the unique natural features of South Dakota. Not bad considering that we only arrived in South Dakota on Sunday. 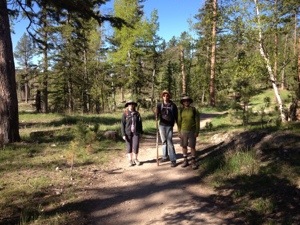 At the top of Harney Peak there was a strange lookout point. It was actually the remnants of an old building. We think people actually hid out here, but I am not sure who. It was still interesting to see the place, and imagine the life of someone living on top of the tallest peak in the area. From this vantage point, you can see all of the peaks. We could look out on all of the peaks of the Black Hills, including the ones we had driven up and down yesterday and today, and they all showed up significantly below us. This may be the first time I have experienced this exact feeling, climbing my own way up to the top of the highest peak in the area. In 2005, I biked up Blue Mounds (Wisconsin), but the terrain there is nothing compared to what it is here. In 1998, my family and I drove up Pike’s Peak, but, we drove.

The alternate trail we took on the return trip to the car took us real close to the Cathedral Spires. These rock formations remind me of the Dolomites in Northern Italy, with their mostly vertical, but imperfect, gray colored rock structures of varying heights. In fact, for the entirety of the hike, as well as in many cases before and after, I have been referring to this feature as “The Dolomites”. And, no, I am not trying to show off that I am Italian, or that I have been to Italy. It is just kind of natural for people to make the association in their head based on the visual. I am reminded of an instance when someone I knew kept referring to the green sauce that they provide with samosa at an Indian restaurant as guacamole. He was not trying to show off his Mexican-ness, it was just that his previous experiences with green sauces in restaurants had mainly been guacamole, and the natural association was made. In the same vein, the other time. I had seen rock formations like that, it was the Dolomites. Some of the other rock formations did look like the Flatirons in Boulder, with a major exception being that they are lighter in color. 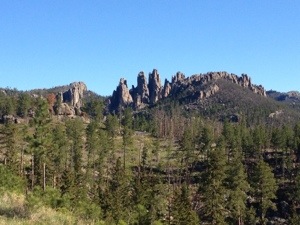 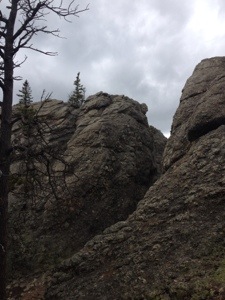 On this hike, in several places, both on and off the trails we were traversing, we passed through some tight areas inside rock formations. This was a good deal of fun, although somewhat scary. Oddly enough, I enjoy doing things like this, and I have not even completely figured out why. I guess there is a slight element of danger in it, and it does provide the hike with some variety. But, hiking is already an interesting enough activity that it does not need variety. And, I am not really pushing my limits anymore with this nonsense, as I have done it plenty of times over the past several years. Maybe it is just curiosity, the entrance into the unknown, the feeling you get when anything can happen. In this sense, it would be the same feeling that drives people to take a new route home, enter into new activities and new social circles, or even drink or do drugs. The flirtation with the unknown seems to come out in me a lot; skiing, hiking, parties, etc.

One final note about the hike. Boy have these pine beetles done a number on the forrest here. Scenes like this one are seen everywhere, and when viewed at a distance, parts of the “Black Hills” look quite red! I knew this was a big problem in Colorado, but it actually seems like the beetles have done even worse to the forests here. It is sad to think that the very nature of these places are bound to change forever, but in life, change is inevitable. It cannot be avoided at any costs. 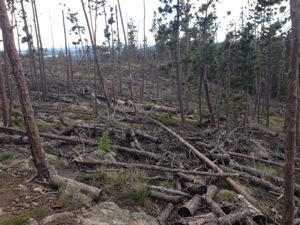 Our other activity today was visiting Crazy Horse. Crazy Horse is a statue of a famous Native American hero that sits on the other side of the black hills from Mount Rushmore. But, it is incomplete. It has actually been under construction since 1948, and is still nowhere near close to done. According to the hosts at our campground last night, the Crazy Horse statue will “not be completed in your grandchildren’s lifetime”. This slow progress is due to the desire to make this statue quite enormous, as well as their commitment to use only private funds. Turning down money shows a significant amount of pride, and/ or adherence to principles. Maybe both, they are actually probably quite related. 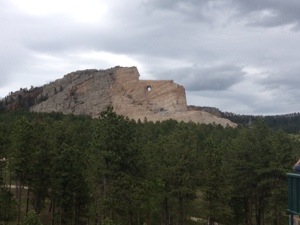 At Crazy Horse is also a museum of the Native American. We did not intend to spend all day there, so I pick a few excerpts to read, some about famous Native Americans. I don’t even remember the stories themselves, but reading these stories makes me more curious about Native American culture in general. History is written by the winners, and in the battle for North America, we, the white man, are the winners. But, it is hard to ignore the fact that we kept making and then Subsequently breaking treaty after treaty with these Native tribes. I would love to know the full story behind this, from both perspectives, and how the modern day Native Americans feel about all this, as well as the situation they are in now. Are they happy to have all the modern conveniences associated with the U.S.A.? Do they feel that we are the ones protecting the freedom of all? Or do they feel they cannot live the lifestyle of their choosing, and their continent has been usurped? I bet you get some real mixed emotions.

On the campground tonight, we got a bit goofy. In fact, we spent probably about half an hour, sometime around sunset, trying to throw pine cones into the campfire from various places. Most of them were from the top of a rock. It was some unexpected (and free) fun. I think our society could use a bit more of that if you ask me. One of my favorite things about trips like this are actually simple things like this that bring joy out of nowhere, unexpectedly. 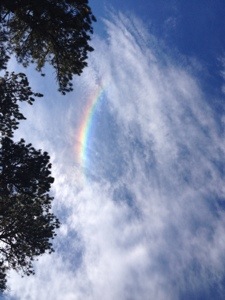