This weekend, I got a glimpse into the future in an unexpected place … Wyoming.  Not to say that I have any kind of preconceived notion that Wyoming is backwards in any sort of way.  It is just that in mainstream American culture, people tend to look elsewhere for glimpses of the future.  More frequently, people will look to the latest gadgets being developed in Silicon Valley, the newest fashion designs coming out of New York, or even a new dance craze coming out of a place like Miami before they look into anything going on in a more remote area of the country.

However, my experience in Wyoming this past weekend felt oddly futuristic, albeit in a more subtle way.  As a travel lover, I pay close attention to all issues related to transportation and how we get around.  We are a mobile country full of people (such as myself) who love to be in motion.  And, regardless of what changes, I sincerely hope we (as a nation) never lose that zest for life and exploration that draws us out of our homes, and out of our day to day lives, to new places, experiences, and adventures.

While many novels and films set in the future immediately focus on some kind of major technological breakthrough that ultimately changes the way we live, the changes we actually observe are typically more gradual.  And, while many people are anticipating electric, driver-less cars coming out of Silicon Valley, over the last fifteen years, we have achieved some less high-profile, but still significant changes, such as the proliferation of hybrid cars, incremental efficiency improvements, a general increase in interest in bicycle commuting, and a few new rail lines in some cities.  Once again, nothing monumental, but the results of these changes, and how they impact our lives is easy to spot. 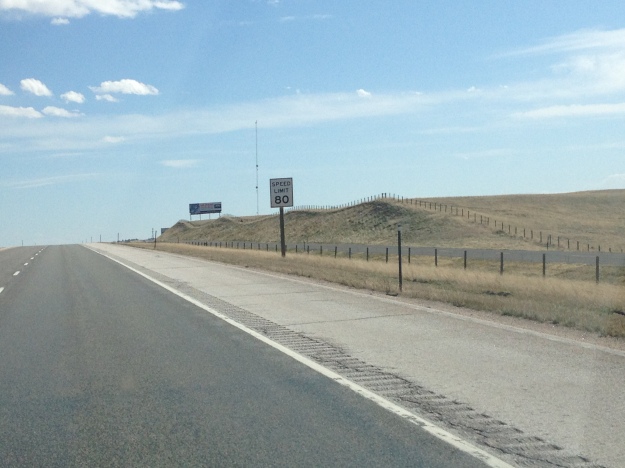 These gradual changes were on display this weekend when I, for the first time ever, got to drive on an 80 mile per hour road.  Prior to today, the highest speed limit I had ever observed had been 75.  In fact, it was just last year that speed limits on interstate highways in many parts of Wyoming increased to 80 miles per hour.  Higher speed limits can at least partially be attributed to vehicles becoming both safer and more fuel efficient, as historically these two concerns have prompted many to feel uncomfortable about high speed driving.

When I see the 80 mile per hour speed limit on Interstate 25, I see the future.  Growing up in the Midwest, I rarely got to drive on roads with speed limits in excess of 65 miles per hour.  I would commonly go 80, but doing so undoubtedly meant the risk of a speeding ticket.  The same speed here is not only legal, but almost necessary to keep up with the speed of traffic.  Over the years, a significant number of states have decided to allow higher speeds on their interstate highways. 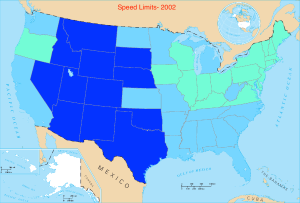 This is not the only transportation trend I observed in Wyoming this weekend.  In Wyoming’s largest city, Cheyenne, it is hard not to notice a newly built Greenway system, designed to accommodate the increasing interest in cycling, and the increased use of cycling as a form of transportation. 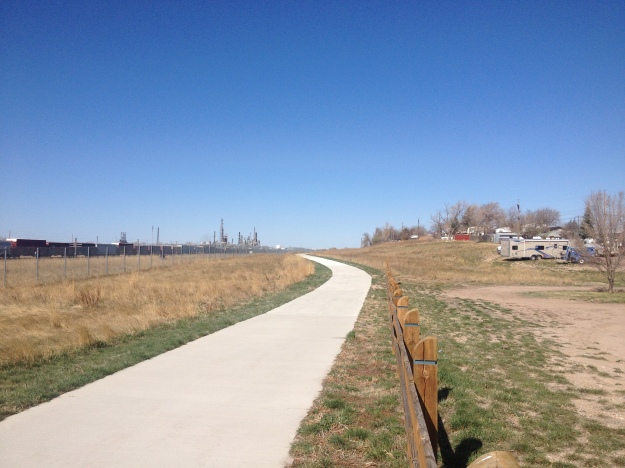 Cheyenne is also ahead of the game when it comes to new and innovative road design.  On the south side of town, a diverging diamond intersection has been built to handle the large volumes of traffic that occurs when a highway has multiple popular rest stops (truck stops) at one exit.

This particular design is best suited for intersections like this one, where most of the traffic is either turning left or right (in this case entering or exiting the highway).  A majority of U.S. States have yet to successfully implement a diverging diamond interchange.  Yet, people who live in or travel through this area have seen a significant reduction in congestion at this interchange.

When I see the future of transpiration here in Wyoming, I see a bright one, and also a realistic one.  I am not waiting for some pie-in-the-sky innovation that should suddenly fix all of our problems.  But, I see incremental improvements, as there is one commonality in all of these developments, the desire to accommodate people.  While speed limits are increasing on highways across the country, they are not increasing everywhere.  In fact, last year New York City actually decreased its speed limits on surface streets.  At first these trends appear to contradict one another, but both are actually helping accommodate more people.  Maintaining slower speed limits on surface streets in town is seen as accommodating to pedestrians and cyclists.  We are moving towards a world where drivers can drive a fast but comfortable speed and arrive at their destination quicker using limited access highways, meanwhile pedestrians and cyclists feel increasingly comfortable choosing not to drive places as they travel on Greenway-ype trails, and/or surface streets where their safety is at only minimal risk.

Accommodation of different types of people, who live different types of lives, is important beyond just methods of transportation.  If we are going to live within a diverse nation like this one, let alone a global society, we must learn to live with those who chose to do things differently than us, and not let these differences lead to violent conflict.  Although some people would probably never look to a place like Wyoming for clues as to how the future will unfold, I am quite proud to be the kind of person who can see value anywhere.  And that, despite the current political situation in our country, I can go to a place like Wyoming, but also to a place like New York, and enjoy the local culture.  It is not that I do not have strong opinions opinions about anything, it is just that I refuse to view everything through the lens of the current red-state blue-state divide that so many people focus on.  Those who view all places, ideas, and even people through this lens place unnecessary limitations upon themselves.  Recently, at a bar, an acquaintance of mine actually suggested that political affiliations are a strong consideration for potential one night stands.  Needless to say my respect for this individual evaporated that evening.

If we can find ways to accommodate one another, such as maintaining both high-speed interstates and safe places to walk and bike, we no longer need to fight with those who do things differently than us.  The more we do so in all areas of our lives, the better we will be equipped to handle the diverse world that we have, and the more opportunities for meaningful experiences we will be able to take advantage of.