Selecting the best possible route can be a challenge on bike trips.  In an ideal situation, there would be a direct route, a road or a trail, safe for cycling, pleasant, providing a direct path from point A to point B, and conveniently jaunting by all of the point Cs that are of interest along the way.  In the sparsely populated West, there rarely is an ideal route, but there often is only one option.  I could not picture taking any route other than the standard cycling route when traveling from Portland, Oregon to Missoula, Montana.  When following one of the Adventure Cycling’s bike routes, the job of selecting the best possible route is already done, by experts with tons of experience bike touring.

Being in neither situation, we spent the better part of an hour looking over maps before settling on the ideal route from Greensboro, Vermont to Conway, New Hampshire.  Choosing a route in places like this can often be a matter of factoring in various considerations and determining how to manage priorities.  I’d predict that six different cycling groups would select at least four different routes for this particular ride.  Some people want to avoid adding extra miles to an already lengthy ride.  Others wish to avoid obstacles such as wind, hills, and towns with numerous stoplights.  Others still may prioritize seeing as many sights as possible, while there are probably some that just want to find the safest route.

We had imperfect information, as in we couldn’t find information such as whether or not certain small roads are paved, or whether roads like U.S. Highway 5 have a wide enough shoulder for cycling.  Still, we took kind of a balanced approach, and I believe the route we selected served us well.

The first 45 miles of the ride were in Vermont.  On this first segment, I got what felt like the full Vermont experience, in a way I never could have had traveling by other means. 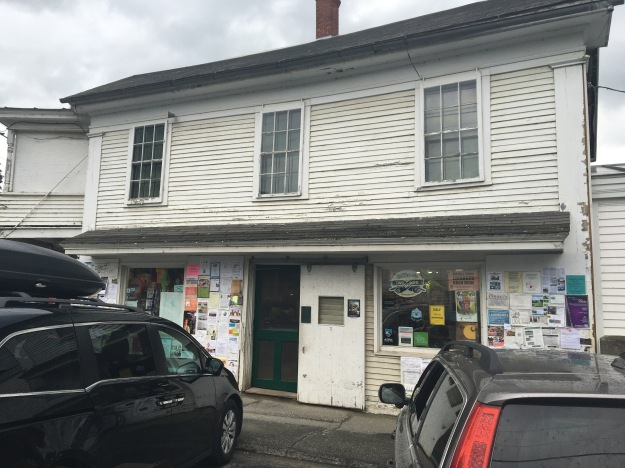 I stopped in one of those off the wall small town convenience shops that is sort of a grocery store and also sort of a cultural center. 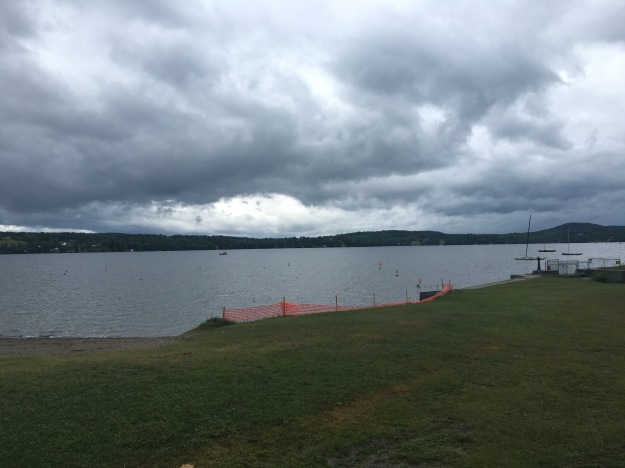 I rode by lakes. 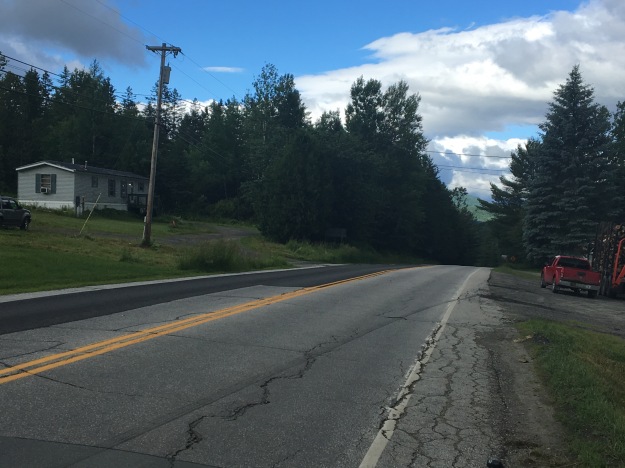 Over some rolling hills. 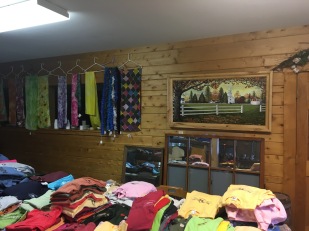 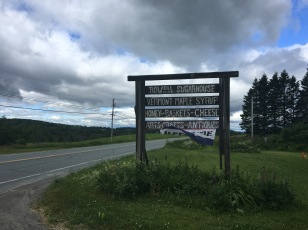 Got to stop in one of those cheese and maple syrup shops with the arts and crafts and all. 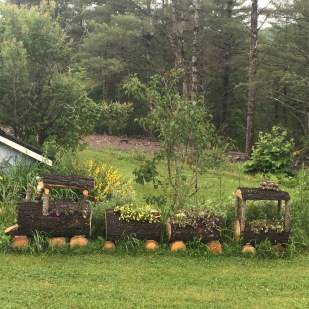 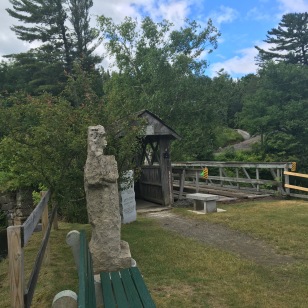 We went by a couple of houses with interesting designs in their front yard that made me simply say, “That’s so Vermont”.  They screamed some sort of combination of people having a lot of time on their hands, and also looking for ways to express their individuality. 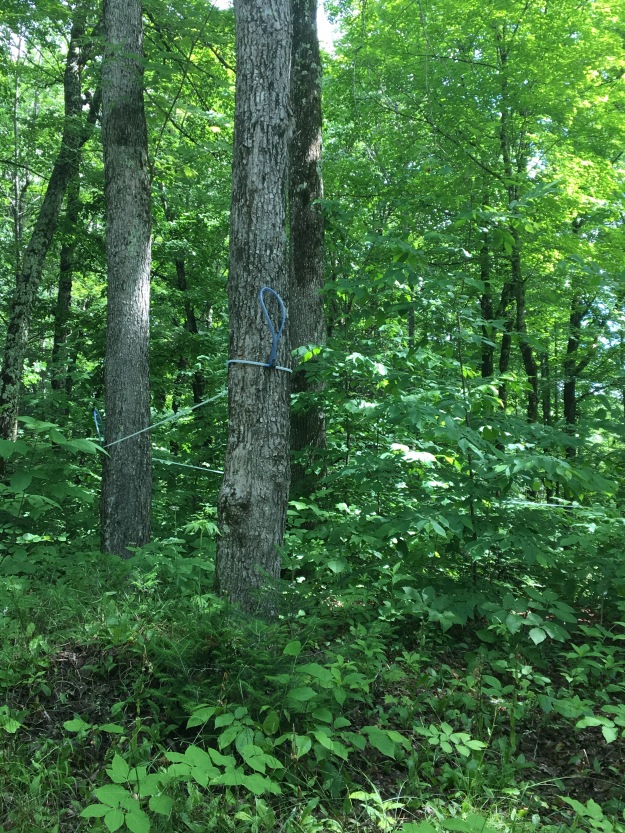 We even rode through a forest, along an unpaved road, where trees were being tapped for maple syrup. 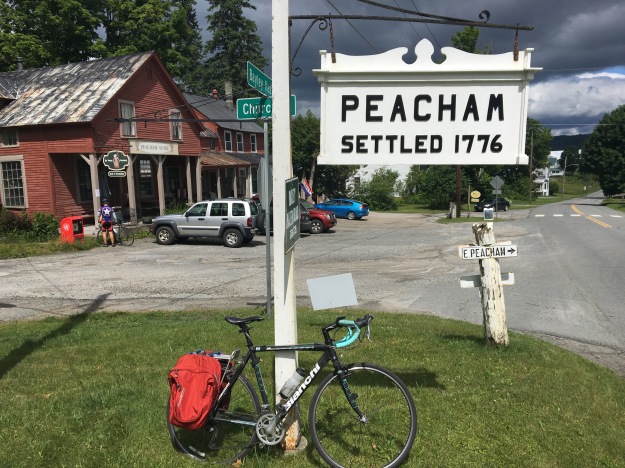 And finally, stopped in a quintessential small Vermont town, Peacham, settled in 1776, and even talked to some people in the cafe. 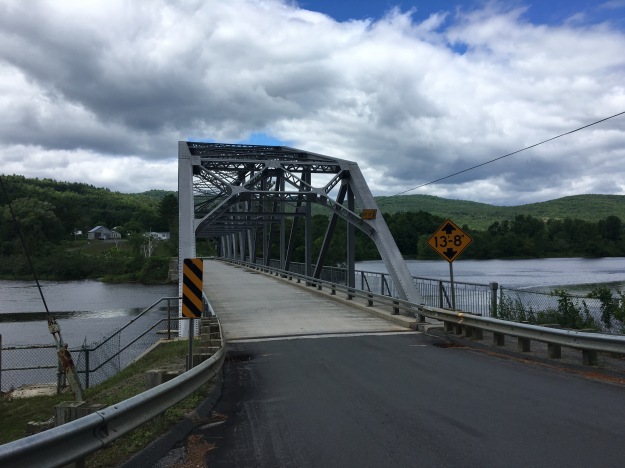 We took a little bridge over the Connecticut River, and, once again, I was disappointed not to see the gigantic Welcome to New Hampshire sign.

For the second day in a row, I crossed a major river, entered a new state, and found myself feeling like I was in a completely different place, with different types of people with different attitudes.  Before taking on the major climbs I knew lied ahead of me, I stopped at the Walmart in Woodsville to get water and a quick snack.  I immediately heard different accents.  A stick of beef jerky and a candy bar cost me $1.79, with no sales tax! 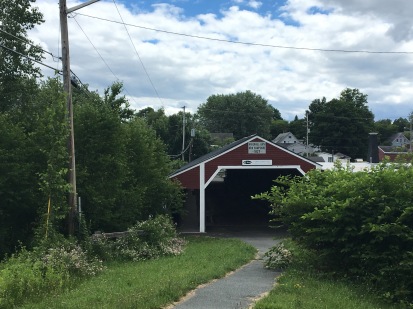 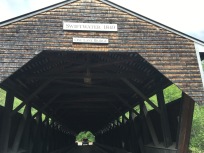 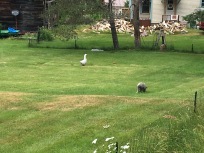 The first climb began right away.  In fact, it began before even leaving town!  We saw a couple of covered bridges (Clay thought we’d see them in Vermont, but at least we finally saw one here in New Hampshire), and a home with a pet pig in the yard, and finally, entered the White Mountain National Forest. 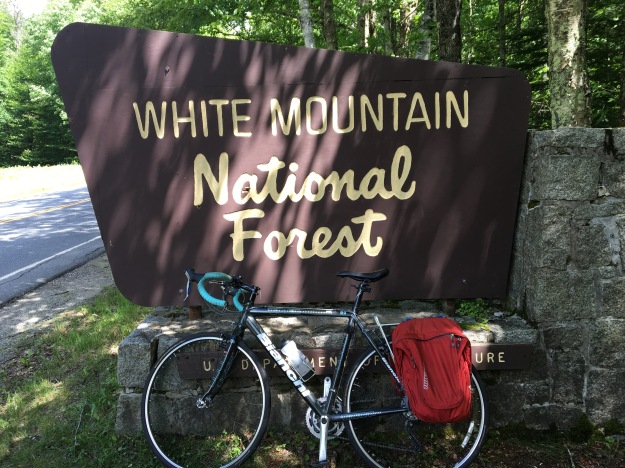 The climb was not particularly steep.  I’ve been in plenty of situations where I’ve had to climb steeper hills, achieving more elevation gain over a shorter distance.  But, it was long, lasting nearly 17 miles!  This made the climb quite exhausting. 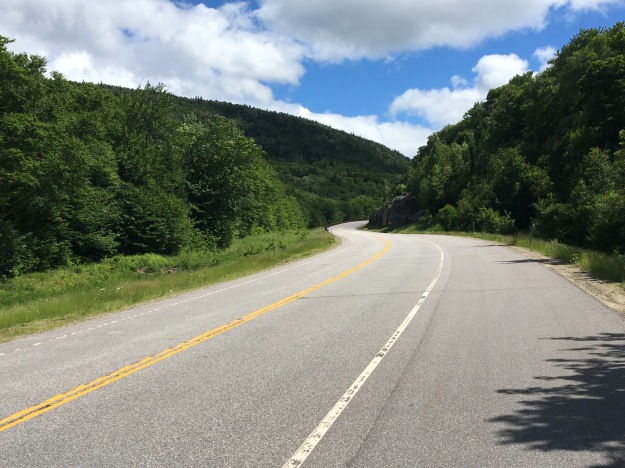 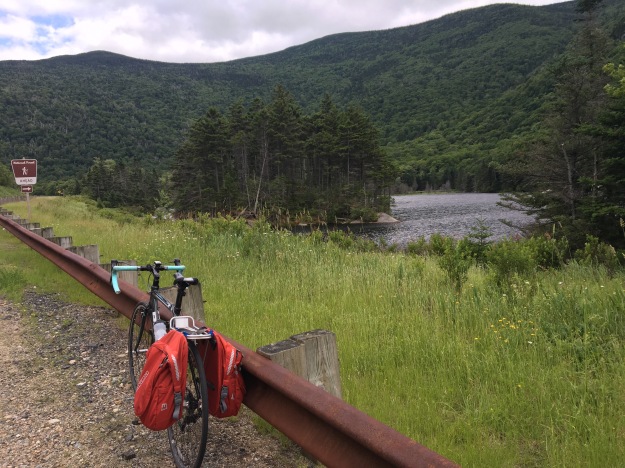 It felt like I was following a river called the “Lost River” the entire duration of the climb, on both the uphill and downhill sides. 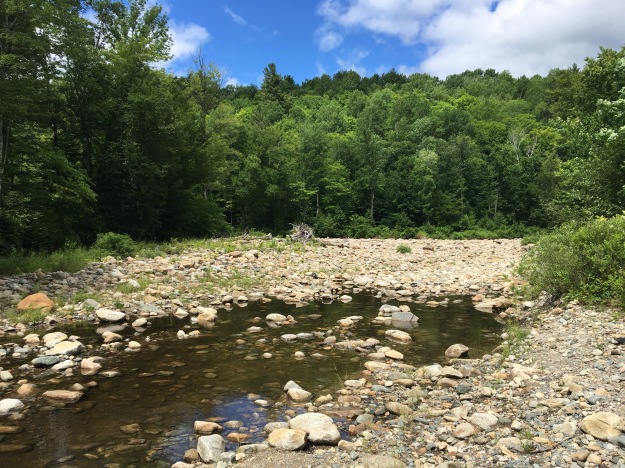 At this point, I may not have been as mentally sharp as I typically am, due to physical exhaustion.  But, this river, with its tan-ish hue felt like it was with me for the entire ride between Woodsville and Lincoln.

At Lincoln, I took another break.  Even though I had descended a bit, probably around 1000 feet from the summit of my last climb, I was still feeling delirious.  I first confused the tiny town of Woodstock on the other side of Interstate 93 for Lincoln itself, then it took me a while to find the place where the rest of my party had already stopped for lunch.  Exhausted and delirious, I entered the room and immediately exclaimed, “that ride was like a college affair gone wrong, beautiful, exhausting, and now I am just confused”.

Lincoln is a super touristy town, which I did not expect.  There is the typical arrangement of hotels, pizza shops, ice cream stands, souvenir shops, and outdoor outfitters I’ve come to expect from any town like this.  Unlike other tourist hot spots I’ve been to, everywhere I looked I saw outfitters offering Moose tours. Some of them even offered something like a 97% guarantee of a Moose spotting!  This sounds incredible given that I have always known Moose to be elusive and hard to find.

In fact, as soon as I left town, to take on another climb, back in the National Forest, and to even higher heights, I saw a sign I’ve never seen before, urging motorists to be on the lookout for Moose.  So, well, I get the point, there are a lot of Moose here.

I geared myself up for this climb more than the last one.  So, while it was likely more challenging than the first climb, I felt more comfortable, as I had set my expectations for something even crazier than this.  I still took a couple of stops to take in the scenery, as I personally prefer stopping on climbs rather than descents. 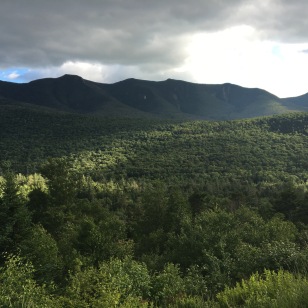 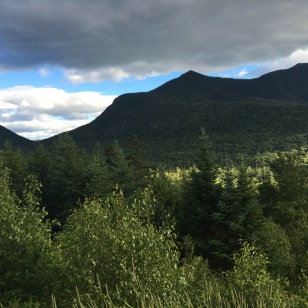 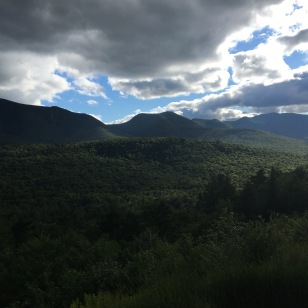 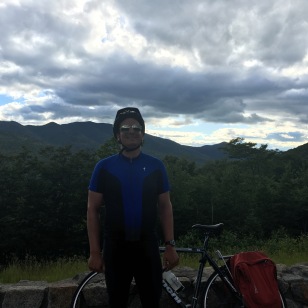 It was the exhausting final mile of climbing up Kancamagus Pass.  I needed something, anything, to divert my attention from the fatigue that had come over me.  In my head, the phrase, “Live Free or Die”, New Hampshire’s State motto, played inside my head, over and over again, to the exact rhythm of my pedal strokes.  I did not do this on purpose.  It’s what just popped in my head, as I was just in New Hampshire, and the activity I was doing, climbing on one of New England’s most iconic roads, made me think of both living free and dying, at the same time.  But, I have been told that repeating a phrase in your head is an effective way to manage challenges like this. 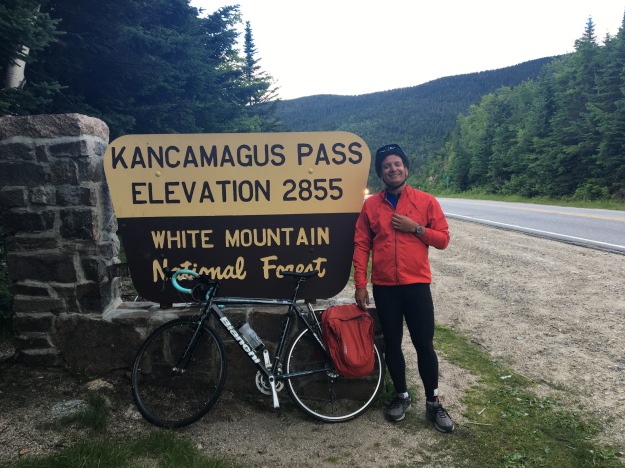 The descent scared me.  It scared me before I even made it to the top of the pass! 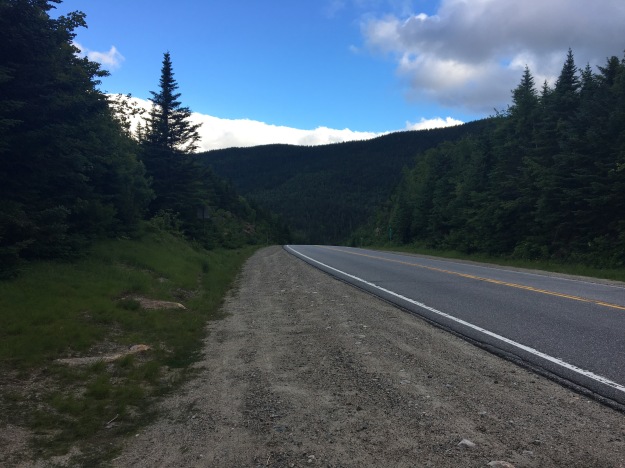 I had looked it up prior to leaving Lincoln.  I knew that Kancamagus Pass was at 2855 feet in elevation, and Conway, our destination for the evening was at 465 feet.  The descent was  almost 2400 feet!  But, I also made a slight miscalculation when determining both how long my ride for the day and how frightening the descent would be.  While delirious, in Lincoln, my bike computer registered at 73 miles for the day.  I was told that the ride to Conway was 37 miles.  Normally, I am good at math, but for some reason I spent most of the ride thinking that my total ride would be 100 miles, even though 73 + 37 is 110.  So, when I reached the top, I thought I had only 11 miles to go (instead of 21), but also thought I would be descending a lot faster. 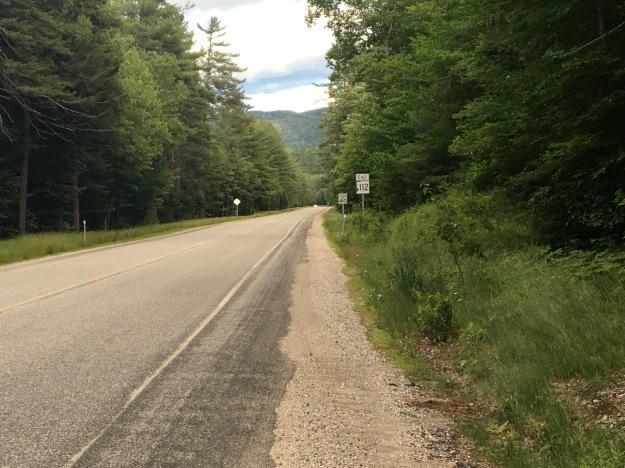 The last part of the ride, a slow descent into Conway dragged on forever. I repeatedly saw signs indicating what highway I was on, New Hampshire route 112, one of New England’s most challenging and iconic cycling roads.  It started to feel like a victory lap.  Unlike at the Adirondacks, where I looked back upon what I had just “conquered”, at the end of my White Mountains ride, I looked forward, seeing the signs as a reminder of what I had just achieved. 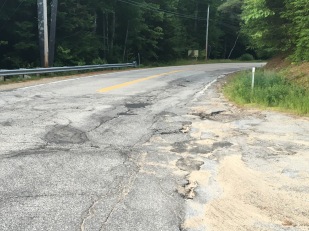 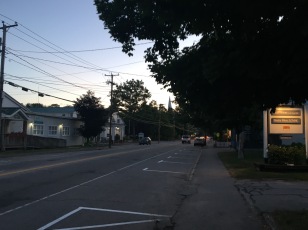 The end of the ride was slowed down by one final annoyance, periodic poor road conditions, causing me not to get into Conway until nearly sundown.  Bumpy sections of roads like this are another piece of information that cannot be obtained while looking at maps and selecting routes.  Over 100 miles into a ride, these bumps became most unwelcome.  They offer the poor choice of either putting more pain onto my butt in the sitting position or relying on my exhausted legs to pull me out of the saddle.

Even had I known this, I still would have selected more or less the same route.  Today was a success.  It was among the most physically challenging rides I have ever done.  I also felt that we had successfully solved the riddle of route selection for optimal cycling experience.