The primary reason I love cycling as much as I do is that I am able to go places a significant distance away completely under my own power.  For many years I have enjoyed commuting to work (now only 1.5 miles but formerly 6 miles), running errands, visiting specific places, and getting myself to and from specific events by bicycle.  I feel the benefits are two-fold.  There is the obvious money savings on fuel (and/or parking/ transit).  In addition to the monetary savings, I find the exercise and time outdoors to have a been a great value to my health, both mentally and physically, over the years.

Roxborough State Park is about 30 miles South of central Denver.  It is a place I had never really thought about visiting up until a few weeks ago when I was looking for new interesting places to ride my bike to, and wanted a ride that would be roughly two hours each way.  In Denver, it is possible to cover a good amount of distance quite quickly using the metro area’s bike trails, which bypass traffic signals, as well as most terrain features that would normally slow a cyclist down. 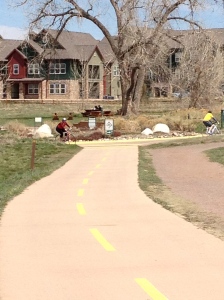 A couple of years ago, this was the destination of a couple of rides I had done.  Last year, I did a ride to Waterton Canyon, the starting point of the Colorado Trail, a place I also rode by on my way to Roxborough State Park.  It is somewhat encouraging to actually see my continued progress as a cyclist right in front of me.  However, it also made me realize that there is one disturbing parallel between cycling (or any activity of this nature) and drug addiction; as the more I ride my bicycle, the farther and more intense of a ride I need to do to feel “satisfied”.  This is beginning to feel eerily similar to the gradual increase in tolerance a regular drinker experiences, or the ever increasing doses many drug addicts demand over time.

There was a fairly long line of cars at the entrance to this park.  Luckily, I was able to bypass this line, saving me both roughly 20 minutes of time, as well as the $7 entrance fee to the park.

The road from the entrance to the visitor center, basically the last two miles of the ride, was not all that fun.  It was gravel and bumpy for much of the way.  I felt uncomfortable going over 13 miles per hour.  However, the park rangers were quite pleased that I did not try to use my bicycle on any of the trails, as they do not permit bicycles on the trails.

At the visitor center, I realized that one of the main attractions of this particular park is the wildlife.  Showing people the fur and bones of dead animals seems like a somewhat sick way of presenting what the park had to offer to it’s visitors, but it was really neat to actually feel the fur of a black bear for the first time in my life! 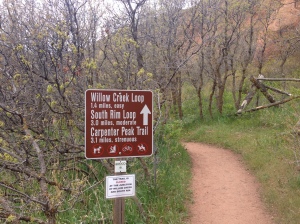 The park is also set up quite similar to Garden of the Gods.  Both places make it easy for the average non-outdoorsy tourist to attain a good view of the park.  Here, the Fountain Valley Overlook, a mere half mile from the parking lot with only a slight grade, provides views like the one at the top of this entry to those with no interest whatsoever of getting any exercise.  The park also offers somewhat more strenuous hiking.  Carpenter Peak is roughly 1000 feet higher in elevation than the visitor center. 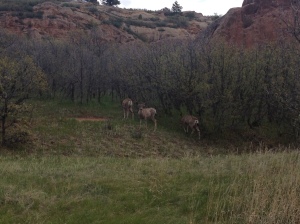 I meandered around the park a bit, but decided not to do the more strenuous hike as to preserve my energy for bicycling.  The only wildlife I encountered were these three deer, which is not particularly out of the ordinary.  However, I did encounter them at a much closer distance than I typically do.

For much of my time at Roxborough State Park, I was intrigued by these relatively short trees I encountered all over the park.  These tress are quite different than the ones I typically see around Colorado.  I later read, on the way out of the park, that there are some unique species of trees, as well as insects and animals, that live here due to the micro-climates created by the wind patterns that these rock formations create.  In fact, Roxborough State Park is considered a destination not only for it’s rock formations, but also for it’s unique wildlife.

While marveling at the beauty of the park, and considering how awesome it might be to live in one of those houses that overlooks the place, the weather caught me off guard.  Prior to this ride, I looked at the forecast for Denver, which called for a threat of rain after 3 P.M.  However, 30 miles farther south (and closer to the Palmer Divide), and roughly 1,000 feet higher in elevation, any threat of thunderstorms is naturally going to come earlier in the day.  Right around noon, I noticed a few raindrops, and suddenly noticed the clouds beginning to build overhead.

My bike ride home ended up being a race against mother nature, which I barely won, partially by blatantly ignoring the 15 mile per hour speed limits posted along the trail through South Suburban Littleton.  With a little bit of help from the wind at times, I was able to make the 28 mile ride from Roxborough State Park in 100 minutes, returning home by 1:45 P.M.  As someone who typically pays close attention to the weather, and understands weather patterns quite well, this was a somewhat embarrassing oversight on my part.  However, I do feel a sense of accomplishment in making the return ride so quickly.  And, once again, I was reminded of what I love most about cycling; being able to travel a good amount of distance, and even see my own progress on a map, all under my own power.